It is now Week 10 of the 2021-22 NFL season, and many teams will be looking to bounce back after upset losses in Week 9. The PGM NFL picks crew hope to move up the standings this week and will be on the lookout for upsets, as last Sunday showed that anything can happen.

Week 9 saw the Jacksonville Jaguars get their second win of the season over the Buffalo Bills, who were 15 point favorites heading into the game. This 9-6 win for the Jags was the biggest upset of the season so far. The Cowboys were 10 point favorites and got blown out at home against a 4-4 Broncos team.

The Cardinals destroyed the 49ers 31-17 with their backup QB Colt McCoy, and Lamar Jackson and the Ravens got yet another comeback overtime win over the Vikings. The Titans and Steelers showed up on prime time and delivered wins on Sunday and Monday night.

Week 10 has some intriguing games, as the Packers and Seahawks play and both Russell Wilson and Aaron Rodgers will be coming back from injury and Covid-19. The prime-time matchups have some divisional battles, as the Chiefs go on the road to play the Raiders on Sunday night. On Monday night, the Rams will look to bounce back against the 49ers.

The 2021-22 NFL Picks leaderboard remains close after a tough week for everyone, but Karl holds the lead still after going 6-8 in Week 9. The rest of the crew all went 7-7 and the standings remained the same.

“Bottom line is the Ravens defense has not been nearly as good as I thought it’d be; they’ve been giving up far too many points recently. But they’re playing the Dolphins, who generally don’t seem to like scoring points, so they should match up well.” — Alec

“If Week 9’s chaos was an indication, this is a league where anyone can beat anyone on any given week. With that being said, the Ravens offense is on fire and beating Houston doesn’t really give the Dolphins any street credit.” — Karl

“The Titans showed last week that they are a contender even without Derrick Henry, and the Saints offense struggled to get going until the end of the game. As long as the Titans continue to get good performances out of their defense they will win games, and after last week I expect one.” — Joe

“The Titans Head Coach Mike Vrabel is a candidate for coach of the year because his team has shown week after week they can compete against anyone: They are 6-0 against teams that made the playoffs last year.” — Austin

“How funny would it be if the Bills lost to the Jags and the Jets in back-to-back weeks? Answer: Astronomically, legendarily, super-duper-shmooper funny. But real life isn’t funny. Real life is serious business, man.” — Alec

“The Jets still suck. The Bills are allowed to have off weeks. I guarantee a weekend like that will not happen two weeks in a row for them.”— Ali

“I continue to believe that the Lions will win a game sometime soon, but I imagine the Steelers will either be continuing their roll or bouncing back from a tough loss. The Lions, on the other hand, managed not to lose to the bye week. Najee Harris will have his way with Detroit.”— Karl

“I hate the Steelers, but they are going to smack the Lions. The Lions aren’t even trying anymore, and I don’t blame them. I’ve been trying to get the Giants to tank as hard as the Lions so they can get that No. 1 draft pick, but the Lions deserve it?”— Ali

“The Colts have quietly been really good the past few weeks and this is an important division game for them and they will keep on rolling.” — Austin

“I feel like the Colts exclusively play either really good teams — who they lose to — or really bad teams — who they beat. Don’t believe me? Look back at their schedule and see for yourself. I want to see the Colts play some run-of-the-mill, middle-of-the-pack teams sometime. That’d get my blood pumping.” — Alec

“Playoff rematch here, but I doubt Taylor Heinicke will be as surprisingly successful as he was in January.”— Karl

“I’d take the Bucs off a bye week against pretty much anyone at this point.” — Joe

“Are you hungry? Because I am. For some Mac and cheese.”— Ali

“Now this is the Browns team I’ve been waiting to see! The good people of Cleveland deserve more.”— Alec 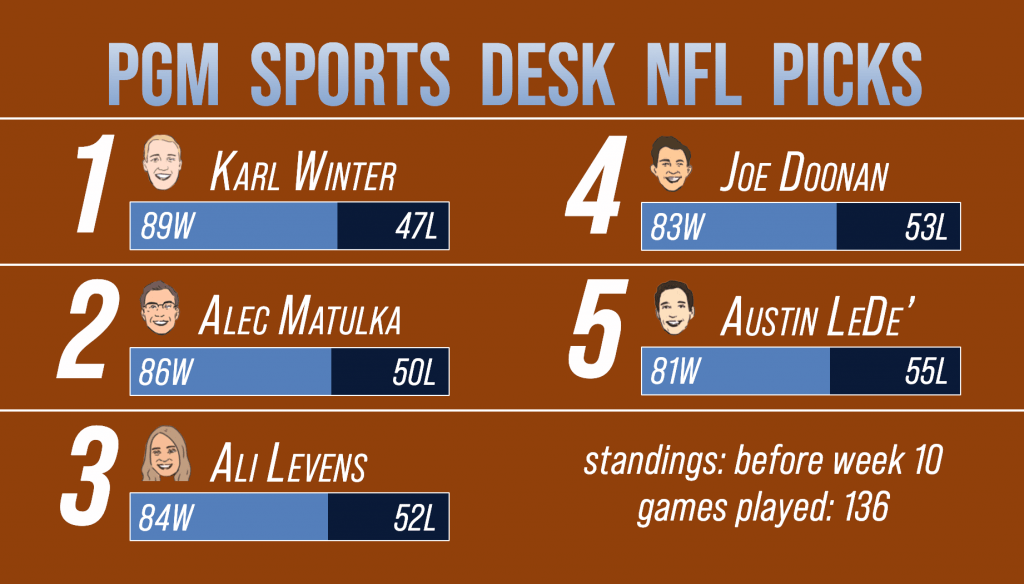 “The Falcons have been a pleasant surprise, but with no Calvin Ridley, I don’t think they have enough offensively to beat the Cowboys.”— Joe

“I have hopped on the Falcons bandwagon, as I have been doing good picking them, so I will continue to pick them.”— Austin

“The Cardinals have been insane this year. The Panthers have not. Easy choice.”—Ali

“Joe Doonan Upset Special here. The Vikings keep falling just short against good teams, and I think they finally get one to go their way.”— Joe

“This should be a high-scoring game. I’ve been pretty bad at picking for or against the Chargers, but I feel even less confident about picking the Vikings in a game that I think will be close. The Vikings are like the Nebraska Cornhuskers in college football this year — always close but never winning.”— Karl

“I think Russell Wilson is going to want to prove the Seahawks can still contend and he will lead them to a victory.”— Austin

“The Seahawks now have their starting quarterback on field, while the Packers may not. Oh how the turn tables.”— Alec

“Toss-up game. Shoutout to Teddy Two-Gloves and the Broncos for knocking the Cowboys off their high horse. Javonte Williams also breaks a lot of tackles.”— Karl

“Now that Von [Miller] has left the station, the Broncos are a reborn team. Plus, the Eagles need to lose now. They’ve won too many games.”— Ali

“The Raiders are starting to do what they always do midseason: Lose. The Chiefs have been super unimpressive, but I think they find a way to win this one.”— Joe

“Chiefs still look shaky and the Raiders will be looking to bounce back after a tough loss to a bad Giants team.”— Austin

“This is very much a trap game for the Rams. Kyle Shanahan has had the Rams number since he started coaching the Niners, but I don’t see the Rams playing poorly for two weeks straight.” — Joe

“I know the Rams lost to the Titans. The Titans are a very good team, and losing to great teams only makes them better. I sense a dicey NFC West matchup, but it ultimately will come down to the better and relevant team.”— Ali