Opinion: Kick Chick-fil-A to the Curb 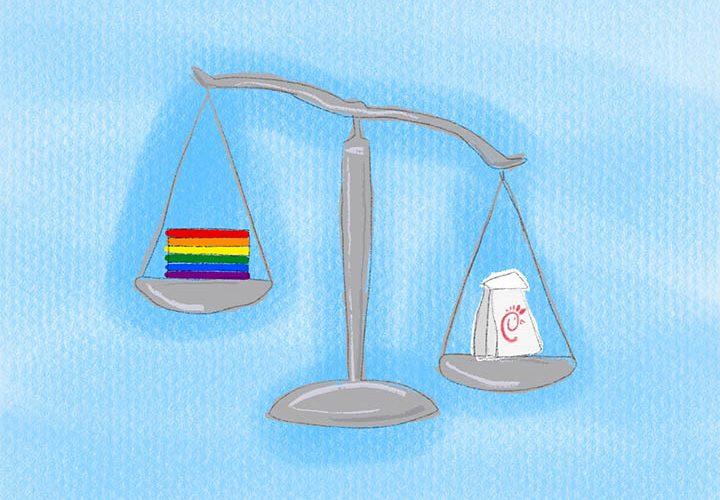 Though Pepperdine claims to have an all-inclusive campus that encompasses the LGBTQ+ community, one can only wonder why the University continues to allow Chick-fil-A — a notoriously anti-LGBTQ+ corporation — to regularly serve students on campus.

“Inspired by the call of Christ, Seaver College rejects racism, sexism, xenophobia, homophobia, bullying, ableism, intolerance, hatred, or any other perspective or practice that devalues another human being,” according to Seaver College’s Inclusion Statement.

The University explicitly “rejects homophobia” yet continues to allow a homophobic company to distribute its product on campus. The popularity of Chick-fil-A on campus even prompted the Student Government Association to create a Change.org petition in 2019 to bring the fast-food company permanently to campus.

It is no wonder why a Christian university would promote having Chick-fil-A— a famously known Christian corporation, so much so that it is closed on Sundays because of the founder’s faith. However, it is for selfish reasons that petitions like this have started, as those who initiated it are clearly not thinking of the implications it means for their LGBTQ+ peers.

The Chick-fil-A petition was started in the name of advocating for better food options on campus, yet SGA denies any role in it.

“SGA hasn’t been involved in conversations to sell Chick-fil-A products on campus,” SGA President Chase Johnson wrote in an Oct. 25 email to the Graphic.

The petition, which SGA created in October 2019, has existed throughout Johnson’s time as an SGA e-board member, both as vice president of finance and president from 2019 to now.

While Johnson claims SGA does not sell Chick-fil-A on campus, he did affirm the organization has given it out. 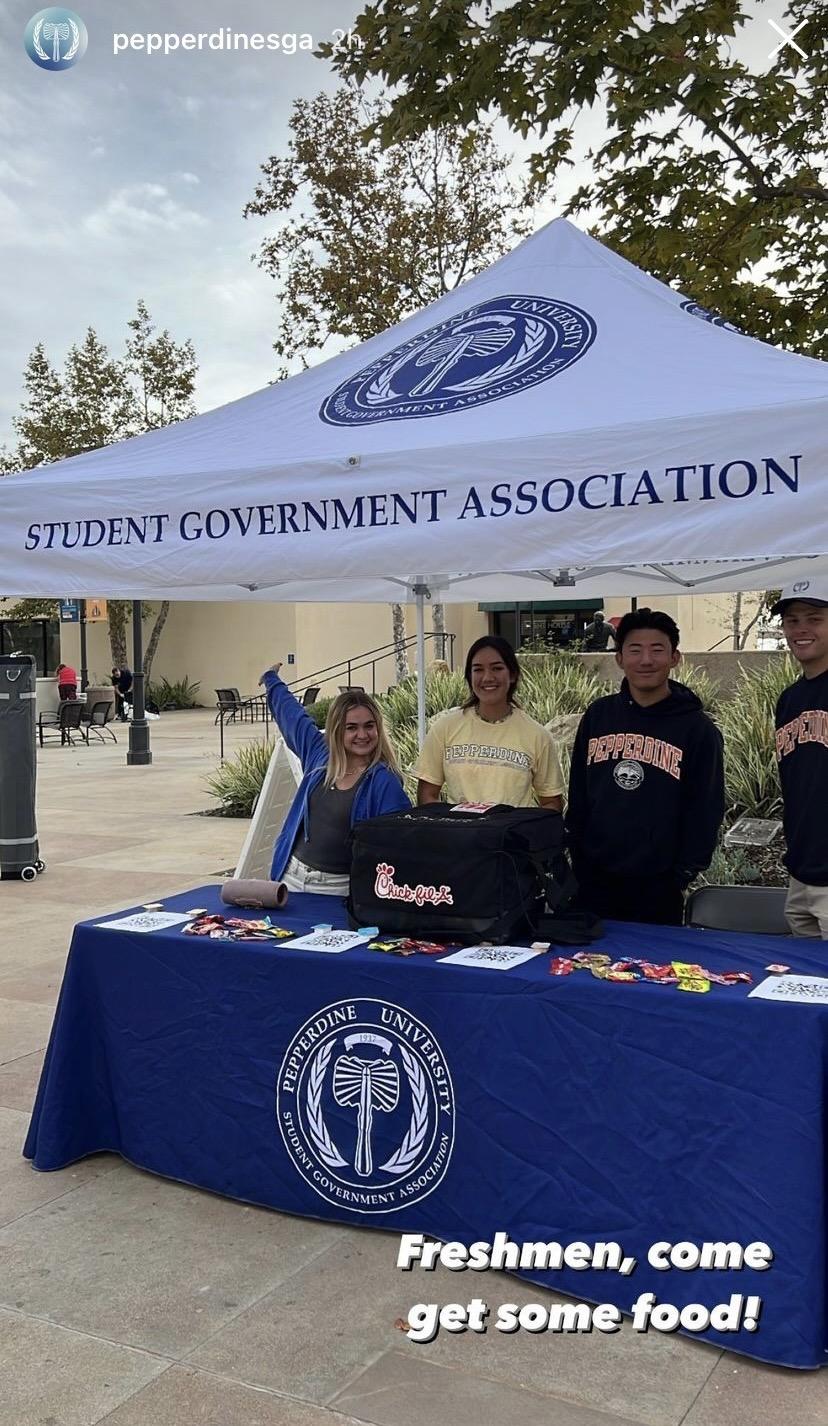 This photo shows SGA handing out Chick-fil-A to freshmen on main campus on November 1. Photo courtesy of SGA’s Instagram

“With regard to SGA giving out Chick-fil-A, I personally recognize the immense popularity among students and appreciate the excellent service provided by the catering team at the Westlake Village location,” Johnson wrote.

On SGA’s Instagram under the highlight titled “Events,” multiple posts show blatant advertising of the distribution of the chicken sandwiches. By using slogans like “Plenty of CFA on campus” and even pushing for the Class of 2025 to “Vote for CFA,” it is clear SGA is not shy about its relationship with the company.

Additionally, the “First Board Newsletter of the Semester” was sent by the Student Programming Board in an email Aug. 30. The newsletter noted that “+Merch & Chick-fil-A sandwiches w/ @pepperdinesga” would be distributed to commence the school year. 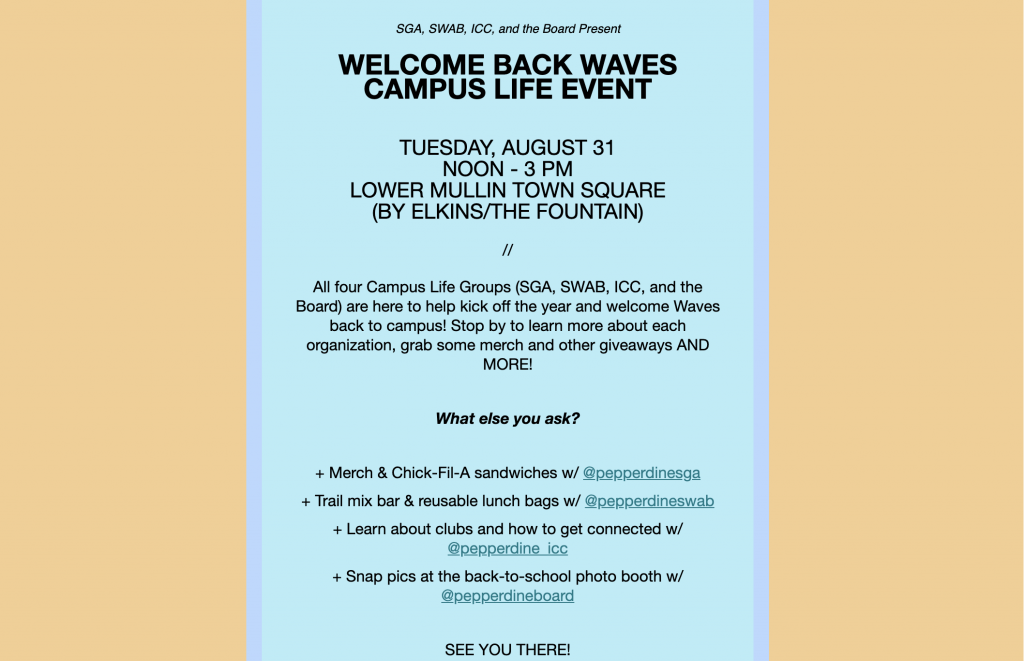 This email from the Student Programming Board shows the explicit advertising of Chick-fil-A’s distribution by SGA at a campus event on August 31. Photo from the Board’s newsletter to students courtesy of Samantha Torre

Every year, students pay a $252 Campus Life Fee — an unavoidable cost that inherently funds SGA’s budget. Considering SGA is using student money without approval to fund Chick-fil-A distribution without student approval to fund Chick-fil-A’s distribution on campus, it would be beneficial for SGA to address their concerning relationship with the company and acknowledge the harm it causes LGBTQ+ members of the Pepperdine community.

Chick-fil-A has earned a consistent anti-LGBTQ+ reputation due to its donations to organizations like the Fellowship of Christian Athletes (FCA), according to the Chick-fil-A Foundation website. FCA is a sports foundation built upon principles of traditional Christian values, such as marriage being exclusively between a man and a woman.

“We believe God’s design for sexual intimacy is to be expressed only within the context of marriage, that God created man and woman to complement and complete each other,” according to FCA’s statement of faith.

Truett Cathy, the founder of Chick-fil-A, previously donated to anti-LGBTQ+ organizations like the Marriage and Family Foundation. Cathy also extended his charitable outreach to non-profit organizations, such as Exodus International, which promotes the idea of conversion therapy, according to Vox.

Conversion therapy operates on the assumed belief that LGBTQ+ individuals can essentially remove their same-sex feelings.

Dan Cathy — Chick-fil-A’s current CEO and son of Truett Cathy— shares like-minded values in regards to same-sex marriage and his lack of tolerance for the LGBTQ+ community as explained in a 2018 interview.

“I personally express a view of support of the Biblical definition of marriage,” Cathy said.

Like Cathy and the FCA alike, Pepperdine hypocritically holds the same stance on marriage — all while preaching messages of inclusivity to LGBTQ+ students and staff.

“Pepperdine University affirms that sexual relationships are designed by God to be expressed solely within a marriage between husband and wife,” according to the University’s Sexual Relationships Statement.

Messages of inclusivity only go so far when Pepperdine continues to allow an anti-LGBTQ+ corporation on a supposedly LGBTQ+ friendly campus. Upholding the traditional Christian value of acknowledging exclusively heterosexual relationships should not come at the cost of further actively marginalizing LGBTQ+ members of the community.

The University claims to denounce any forms of bullying in answering questions of how it will respond to the harassment of LGBTQ+ students. Yet, allowing an anti-LGBTQ+ company like Chick-fil-A to be advertised on campus is not a step in the right direction in preventative action.

This decision to prioritize mediocre chicken sandwiches over the protection of Pepperdine’s LGBTQ+ community symbolizes a deeper connotation within the University. It demonstrates how the comfort and sense of belonging for marginalized groups like the LGBTQ+ community don’t outweigh the desire for Chick-fil-A to be on campus.

The University should either stop Chick-fil-A distribution or stop espousing messages of inclusivity to marginalized groups that become undermined entirely when anti-LGBTQ+ companies continue to conduct business on campus. 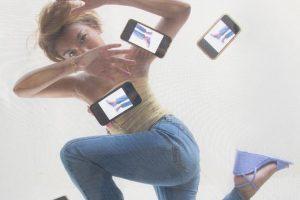