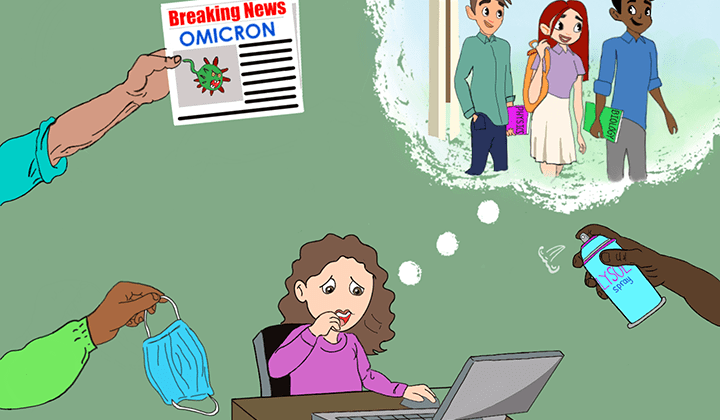 When President Jim Gash announced Jan. 12 that classes would resume in-person with one day’s notice, a shock was felt among Waves everywhere.

Many students said they were hesitant to accept the University’s decision. While some said they are thankful to be back in the classroom, others would rather learn virtually to avoid spreading the virus and to keep themselves safe.

Despite Pepperdine’s plan to return to in-person instruction for the spring semester, many students were doubtful that they would make it on campus as promised, making Gash’s announcement that much more unexpected.

Despite 677 student and faculty cases ravaging campus at the time of announcement (as of Jan. 26, cases have increased to 883) Pepperdine decided to resume the 2021-22 school year in person. Instead of going back to online instruction after winter break, the University wanted to avoid another “spring of 2020” scenario where students leave campus for home and never find their way back.

Juniors and seniors can testify to their stressful experiences that semester. Many were studying abroad at the time at one of Pepperdine’s international campuses, and will forever remember the day when their programs were cut short. Students were sent home from their International Programs to finish the semester online.

For those who left campus with hopes of returning after a few weeks of quarantine, they were sadly mistaken. At the time, so little was known about the virus. Even as we gain more knowledge day by day, there’s still a lot that we don’t know two years later.

However, a lot has changed since the beginning of the pandemic. An article written in the Graphic Mar. 21, 2020 titled “COVID-19 Cases at Pepperdine Rise to 4” shows just how differently we handle the virus.

Conditions have improved over time, with students, faculty and staff continuing to adapt despite the constant changes in protocol at both the national and regional level. LA County guidelines forced Pepperdine to quickly adapt to sudden changes in order to maximize community safety and minimize the spread.

But the University is composed of human beings who, just like us, do not know exactly what the future holds. The pandemic has allowed people to reflect and understand their true values. We all are in it together, and now everyone continues to face the strains that the COVID has placed on life.

In acknowledging our humanity and having compassion for others, we also must also think about how to protect ourselves.

Returning back in-person as met with mixed results. Second-year student Eric Njuku said he felt students are under pressure to return back to class even if they aren’t comfortable doing so.

“Most professors don’t offer Zoom unless you are sick, so you have no choice but to come,” Njuku said.

Others would prefer to return to school online for a few weeks — like many other universities have been doing — and come back to campus when cases decline. Some students prefer an entirely online curriculum.

The University is not held to the same standards as state schools and other public institutions. As a private university, Pepperdine is able to resume in-person instruction so long as it follows county guidelines. Thus, students must fall in line with the institution’s orders to resume instruction unless exposed to or sick with COVID symptoms.

Either way, the University doesn’t allow students to have any input in what style of learning they feel most comfortable with.

Gash’s announcement stated students could return to in-person learning Jan. 13 if they had either received a negative PCR entry test or had tested positive in the past 90 days and were recovered.

Though professors will work with students who have not been cleared to return, there are discrepancies between the teachings that students receive online versus in the classroom.

Njuku tested negative and returned back to campus Jan. 13, though not every student was as lucky. He recalled experiences that many of his quarantining friends and fellow students are facing virtually while professors teach in-person.

“Most of the recordings are blurry,” Njuku commented concerning several instances his friends have had viewing class in a virtual setting. “Some professors just send old PowerPoints with voiceovers that they had recorded from the year before instead of Zooming the class in real-time.”

Even when professors do use Zoom for students to join class online, they have difficulty giving their attention to those who are attending virtually. Oftentimes the professor will pay attention to the class breathing in front of them, glancing over at the chat section every now and then. Students online feel neglected, and are pressured to return back to the classroom if they want to be included.

Pepperdine should give students the option to complete class in the comfort of their home or in the classroom. Every student should be able to come to class safely, and should be treated equally no matter what format of instruction they prefer.