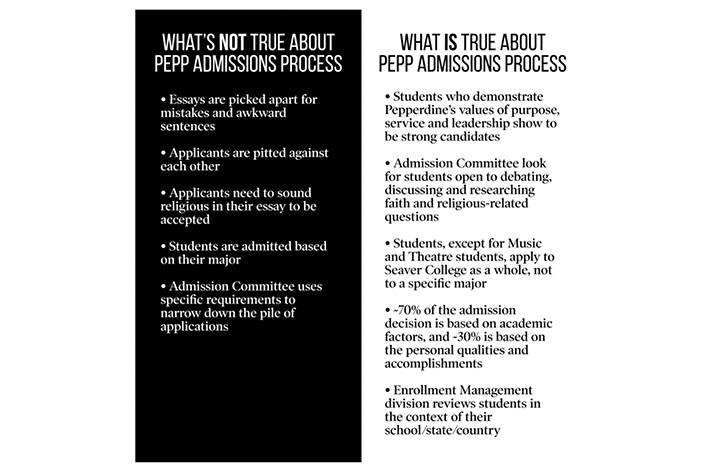 It’s that time of the year again. After years of working up to this moment, high school students have finally hit the submit button. They sent their application to the desks of the Seaver College Office of Admission, left to wait in anticipation of finding out where they could be for the next four years of their life.

Interim Director of Admission Ashley Nguyen wrote in an email that before the application even enters the review process, records analysts, who make sure that all the necessary components and documents are present, look it over.

Kristin Paredes Collins, dean of Enrollment Management, wrote in an email that an entire application to Pepperdine includes the Common App submission, the student’s SAT/ACT score sent from a testing agency, a recommendation letter and an official transcript.

As prospective students work on their applications, Pepperdine’s Enrollment Management division also works to make sure they are prepared to review them.

“It takes a lot of talented people to make this happen within tight deadlines,” Mitchell wrote.

Nguyen wrote that the office releases decisions on or before Apr. 1.

There are multiple offices that make up the Enrollment Management division. Mitchell wrote that the division is made up of the Office of Financial Assistance, Office of Admissions and the Office of International Student Services.

“We study different education systems and schools so that when an application is reviewed, it is initially reviewed by someone who knows the school/state/country well before it is reviewed by the committee,” Mitchell wrote.

Mitchell wrote that this preparation not only applies to students from the United States but also to prospective international students.

“Every student is viewed from the lens of their education context academically,” Mitchell wrote. “It is our responsibility to be trained in world education systems.”

Misconceptions About the Review Process

Collins, as well as other members of the Office of Admissions, engage in multiple case-study programs over the years. Collins wrote that at these programs, students or parents have the chance to review applications themselves, as if they were part of an admissions committee at a college.

“Each time I host a group of students or parents to make these decisions, I am struck by how brutal they are — they commonly pick apart components of essays or a particular way the recommender wrote a letter,” Collins wrote.

Collins wrote that the admission committee does not tear apart applicants or focus on small mistakes in the essay, as people might often believe.

“It might be surprising to people [to hear] that, although the selection process is painfully competitive and the admission committee simply cannot admit every wonderful student,” Collins wrote. “Each applicant is treated with respect and dignity.”

Similarly, Nguyen wrote that unlike what movies often show, the Admission Committee does not pit applicants against each other.

“Our Admission Committee never compares one student to another in our decision-making process,” Nguyen wrote.

Collins wrote that the Admission Committee utilizes a holistic approach when reviewing applications; therefore, it does not use specific requirements to help them decrease the number of applications faster.

For example, when considering one of the supplemental essay questions about faith, some prospective students might feel the need to “sound religious” to be considered for acceptance into Pepperdine. Mitchell wrote that the Office of Admissions, however, does not require students to be Christian to be accepted; rather, the question hopes to offer an opportunity for applicants to think about and discuss “life’s biggest questions.”

“If [students] are open to discussing, debating and researching … we need them at the open table,” Mitchell wrote.

Nick Wilson, admission counselor, wrote in an email that Pepperdine does not admit based on an applicant’s interest for a certain major.

“We do not, with the exception of our Music and Theatre students,” Wilson wrote. “Rather than applying to a specific major, students are applying to Seaver College as a whole.”

Admissions counselors integrate a careful and comprehensive view in the actual review process of applications.

“The Seaver College Office of Admission is committed to assembling an entering class filled with individuals who will add value to the Pepperdine community,” Collins wrote. “Students are admitted on the basis of academic achievements, personal qualities and accomplishments.”

Mitchell wrote that the office also aims to identify students who can thrive academically at Pepperdine.

“In addition to excellence in the classroom, students who demonstrate Pepperdine’s values of purpose, service and leadership often make for strong candidates,” Wilson wrote.

Mitchell wrote that having managed the selection process at two other universities before, she finds that Pepperdine’s admissions process is unique because of its commitment to finding students who show academic strength and heart for service and leadership.

“I always share with guidance counselor friends around the world that Pepperdine looks at both the head and the heart of applicants,” Mitchell wrote. “Pepperdine is not chasing rankings; we are chasing the vision that George Pepperdine had — that still rings true … service-minded leaders who will leave a legacy in their own way.”

Looking toward the future, Mitchell wrote that there may be some changes to admissions due to rulings by the Justice Department.

“There are some rulings that the Justice Department made related to admissions that will likely change the admissions landscape; however, it’s too early to tell,” Mitchell wrote. “Next year, we will have more to report.”