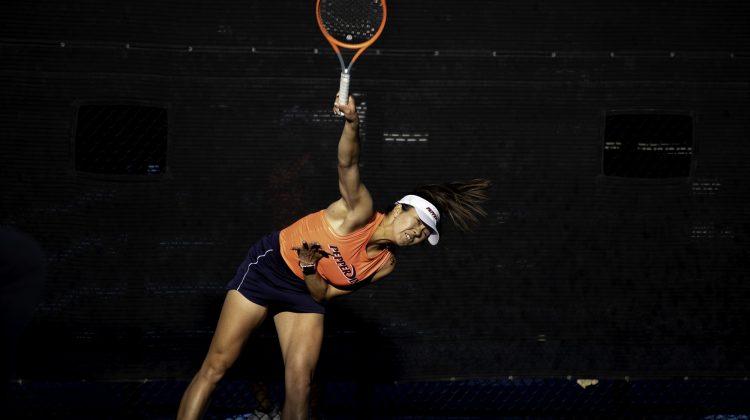 Graduate student Shiori Fukuda serves the ball in her singles match Jan. 22 at the Ralphs-Straus Tennis Center in Malibu. Fukuda was one of two Waves to get a singles win against the Bears. Photos by Brandon Rubsamen

No. 7 Women’s Tennis dropped their first match of the spring season to No. 4 California on Saturday, Jan. 22.

“It’s good to see where we’re at,” Flores said. “We play a tough team, and we’re like ‘OK, we need to figure out what we have to get better at,’ and then we’ll try to do that in the next matches. It’s always good to start tough.”

The Waves came into Saturday off the back of a successful fall campaign, as well as a memorable 2021 spring season, where they reached the finals of the NCAA tournament. Despite this early loss, many players said they’re optimistic about the team’s chances going forward.

Cal Contest Comes Down to the Wire

California has been a tough opponent for the Waves in years past, particularly in Malibu. After Saturday night’s loss, the all-time series now stands at 35-11 in favor of Cal, with the Bears going 14-3 at the Ralphs-Straus Tennis Center. The Waves closed the series gap in recent years, however, as they’d won the previous four meetings with the Bears.

The Waves got off to a hot start Saturday afternoon, winning the doubles point quickly. Broadus and Tjen defeated No. 27 Jessica Alsola and Erin Richardson 6-2, while Fukuda and junior Anastasia Iamachkine wrapped up their match 6-0.

No. 11 Flores and Zaar, playing on Court 1, left their match unfinished at 5-2, due to the results from the other matches.

“Honestly, you want to get the [team] win; it doesn’t matter if we didn’t get our win today, we’ll get it another time,” Zaar said. “Team goes first, always.”

Singles proved to be less straightforward. Broadus and Tjen were the first to finish their matches, losing 6-1, 6-3 and 6-2, 6-3, respectively.

“We got off to a slow start,” Head Coach Per Nilsson said. “We never could dig in. They [Cal] got two really quick points, when what you’d like to do is put a couple points on the board, because that makes the other players feel better. Instead, we put ourselves in a little bit of a hole and had to scramble to catch up.”

No. 10 Zaar leveled the match at 2-2 soon after, beating Valentina Ivanov by a comfortable 6-2, 6-2 scoreline. Zaar said she was proud of the win, but that helping her team was more important than any individual victory.

“Even if you’re losing every single point, you can actually help someone by just having a great attitude, and I think that’s the only thing you can control,” Zaar said. “We were saying before the match, ‘We can’t control the wind today, we can’t control how Cal is going to play, but we can control how we are acting on the court.’ I think that’s the goal for the whole season: to be beasts on the court.”

Flores’ match was the next to finish. After dropping the first set 6-3 to Alsola, Flores came back in the second set. At 5-3 in the second set, Flores fought off a series of match points. The match continued into a tiebreaker, which went back and forth before finishing 7-5 in favor of Alsola.

In the lone three-set match of the afternoon, No. 31 Fukuda battled Haley Giavara. Fukuda won the first set handily, 6-1, but in the second, Giavara used powerful groundstrokes to dictate points and find a way into the match. Giavara pulled out the second set 7-5.

But Fukuda was able to take back the momentum in the deciding set, mixing up her shot selection and moving Giavara around the court. As other matches drew to a close and crowds gathered around Court 1, Fukuda took the final set 7-5, leveling up the overall match at 3-3.

“Once you get to three-all in a college tennis match, anything can happen,” Nilsson said.

All attention turned to Court 5, where Redelijk’s match was midway through the second set. The first set ended 7-5 in favor of the Bears, and the match was contentious throughout. There would be no comeback heroics from the Waves this time, as Redelijk lost the second set 7-5, and the Bears claimed the overall match.

More to Come for the Waves

A number of Waves had successful and trophy-filled fall seasons. Broadus won the singles title at the Battle of the Bay on Sept. 16-19, went 12-2 in singles overall in the fall and won doubles championships at both the Battle of the Bay, with Iamachkine, and the Jack Kramer Invitational, with Fukuda.

Zaar had a standout fall season as well, winning the singles title at the ITA Southwest Regionals Championships on Oct. 21-25, and reaching the doubles final with Flores.

On Jan. 14-16, eight of the Waves nine players traveled to Las Vegas for the Freeman Memorial Championship tournament. Four Waves made it to the quarterfinals, and Shiori Fukuda took home the singles title.

“I’ve been working really hard over the break, and last semester, too,” Fukuda said. “So I think, finally, the hard work kind of paid off, which I’m really happy about. But, at the same time, the season hasn’t even started yet, so I’ve got to keep working.”

Going into the spring season, Pepperdine received a No. 2 ranking in the ITA Collegiate Tennis Division I Women’s Top 25 Coaches Poll, though they’ve since dropped to No. 7. This is the sixth consecutive year the Waves have come into the spring season ranked in the top 10. Nilsson said the team doesn’t put much emphasis on rankings, especially in the beginning of the season.

The first half of the Waves’ schedule features numerous top-25 ranked opponents, including No. 4 Cal, No. 4 UCLA, No. 11 Ohio State, and No. 14 Michigan. Coaches have some say in constructing their teams’ schedules, and Nilsson said this level of competition was intentional.

“It’s gonna show us where we are and what we need to do to get better,” Nilsson said. “Who has put in the work, and how will that translate against the top teams, so that’s why we put those good teams at the very beginning of the year.”

The Waves will look to replicate last season’s remarkable NCAA Tournament run, which saw them reach the finals for the first time in program history. This season’s squad features five returning players, all of whom have extensive NCAA tournament experience.

“We had a great run last year, but that means nothing this semester, so it’s important not to get blinded by that and live in the past. Here is here and now is now,” Zaar said. “Now, you kind of have this carrot, like an experience of what you want to reach again. It was a heartbreak, losing in the final, and now I’m even hungrier to get the title this year.”

The team lost four players from this past season, including then-graduate student Jessica Failla and then-senior Ashley Lahey. Three new Waves — Flores, Broadus and Tjen — made their spring-season debuts in Malibu against Cal.

“I’m hoping to bring a lot of positive energy and a lot of fight,” Flores said. “For the new players, I think it’s just good that they buy into what the coaches and my teammates have created. This culture here is like no other.”

The Waves will be back in action Jan. 29, at home against Columbia University.