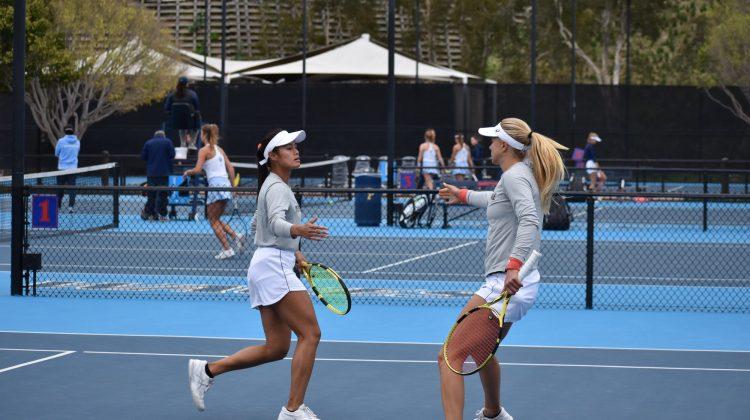 Victoria Flores and Lisa Zaar celebrate a point in the middle of a doubles set Jan. 29. Their game would be unfinished after being up 5-3. Photo by Mary Elisabeth

The No. 7 Pepperdine Women’s Tennis team defeated Columbia 4-0 to open the ITA Kick-Off Weekend on Jan. 29. Pepperdine went on to defeat Norte Dame on Jan. 30 in the second round.

This is the first time the Waves played the Lions. The Waves played for a bid in the Intercollegiate Tennis Association’s National Indoor Team Championships.

“We’re hungry, we had a good run last year and I think everyone is trying to do it even better this year,” junior Lisa Zaar said. “We want to win a lot of matches and get better as tennis players but do it together as a team.”

“Last week we had a tough loss against Cal and I think this match was important for us to be able to bounce back,” Zaar said. “We showed that we can play good and we are going to keep fighting and not give up.”

Doubles wrapped up with Zaar and graduate student Victoria Flores leading their set 5-3 as their match was unfinished due to the results of the other matches.

“The people that are doing the right things will be able to continue that and if not you know we’ll see some new players out there,” Flores said.

The Waves will advance to the ITA National Team Indoor Championships from Feb. 10-14.

Much like their win over Columbia, against Norte Dame, Pepperdine dominated the doubles sets as the pairs of Fukuda and lamachkine along with Broadus and Tjen both won their respective matches without dropping a game to clinch the doubles point for Pepperdine.

In singles, Fukuda and Zaar took care of business in short order, winning 6-1, 6-1, and 6-0, 6-1, respectively. With a 3-0 lead in the match, lamachkine claimed her first dual singles win of the season in straight sets to give Pepperdine the victory.

“Like Lisa said, we’re hungry and there’s so much we have to work on which some people might think this is a rough thing but I think it is an amazing thing early in the season,” Flores said. “We get everyone on the same page and work on all those things we can do even better than last season.”

The ITA National Team Indoor Championships will take place in Madison, Wis., on the campus of the University of Wisconsin. The winner of each of the 15 regional sites, along with the host, Wisconsin, will participate in the championships. Game times and opponents are to be determined.

“We are really motivated to play with each other in doubles and we’re just excited to go out and compete and have fun,” Flores said. “These are amazing opportunities to just get better because it is only the beginning of the season.”