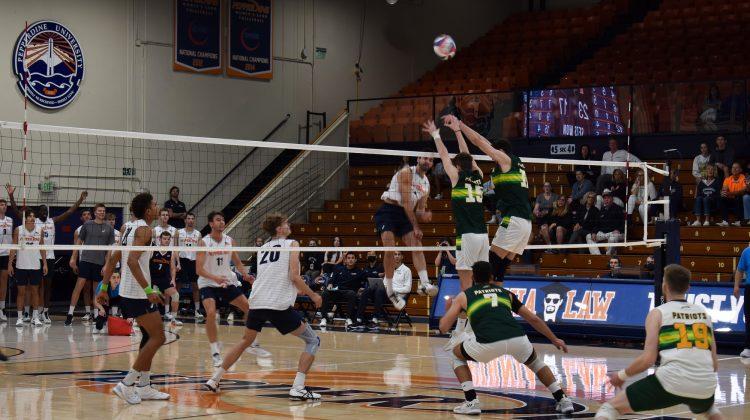 Prior to Friday’s contest, the Waves lost 3-2 at McKendree University on March 5. Hoping to bounce back from the loss, graduate student outside hitter Jaylen Jasper said the team tried to control the things they could.

​​”Even when things aren’t going well, we stay together as a team,” Jasper said. “We rely on each other with our energy, motivation, support after errors, whatever you might call it, we really do a good job of that.”

The Waves came out with a different lineup, moving graduate student outside hitter Spencer Wickens to libero with senior outside hitter Ben Weinberg filling in his spot.

“Spencer has been struggling attacking wise, and our passing needed a little bit of an upgrade,” Head Coach David Hunt said.

Two service errors and miscommunication in the back row contributed to the sluggish start. The Patriots came out with a 5-3 run capitalizing on the Waves’ mistakes.

“I think today we did a good job of putting pressure on them,” Wickens said. “We made mistakes but let our defensive strength show.”

Wickens and his vocal leadership helped the Waves settle into the set. Wickens communicated plays in the back row to take passes on the left side to organize the offense.

“[Wickens] had some veteran presence out there and leadership,” Hunt said. “It was just sort of a spark that we needed.”

Jasper took control of the game with an angle hit that bounced off of the 10-foot line and into the bleachers. A back row kill immediately followed to take a 14-12 lead.

“In practice, we’ve been moving some of the lineups around just so we don’t have the entire starting side hitting against our second side,” Jasper said. “We’ll have me going up against Austin [Wilmot] and [Jacob] Steele, which is a massive block to hit around.”

The Waves would continue to establish their lead with graduate student middle blocker Wilmot’s strong blocks. Wilmot led the team with seven blocks.

“It’s great to be able to hit against some huge blocks and practice, which just translates to the game,” Jasper said.

The Waves would take the first set 25-18 following the Patriots’ two service errors.

Pepperdine started off set two strong with a 2-0 start due to an attacking error and net call on George Mason.

The teams saw back-and-forth action until the Patriots crawled back to a 5-7 deficit.

A long rally forced George Mason sophomore outside hitter Omar Hoyos to crash into the press box while diving for the ball. A high set went to Weinberg, as he painted the 10-foot line for a kill to take an 8-5 lead.

“Ben provides that upgrade at attacking,” Hunt said. “He doesn’t always get set in-system, but he hits the ball high and takes some big rips in some tough situations.”

At match point, Pepperdine junior outside hitter Akin Akinwumi substituted in for the serve. Akinwumi shocked the crowd with a 61.7 mph ace to close the set 25-14.

“We need to make a change to something, and we got a lot of really talented guys,” Hunt said. “At some point, as a coach, you got to back up what you tell them every day and give them a shot.”

With the Patriots down two sets, they looked to find any surge to get back into the game. Hoff converted on two kills during a 4-2 run to start the third set.

Both teams continued to battle out the final set, as Weinberg scored on an attack error. The Waves responded with a 3-1 run to the Patriot’s aggressiveness.

“I think we really wanted to emphasize getting the middles going,” Jasper said. “So far this season, we’ve been slower in some matches to get them going. So just recognizing that we have two of the best middles in the country [Wilmot and Andersen Fuller], and one of the best setters in the country, all we got to do was put up a good pass for them to set them and we just gotta trust that they’ll do their job.”

Down three, the Patriots hoped to get back into the game with a variety of kills and attack errors from the Waves, but each time, the Waves would respond back with scores of their own.

The Waves’ offensive prowess gave them the advantage, as they went on a 6-1 run to win the set. The Waves closed the game on a .438 clip and had 11 kills in the set.

A well-balanced offensive attack combined with a strong defensive effort contributed to the win.

“We put it all out there,” Wickens said. “We did the best that we could, and we worked hard together and hopefully that takes us as far as we can go.”

Following his career-best 33-kill performance versus McKendree, Jasper showed his versatility with 10 kills and six blocks against George Mason. Weinberg contributed to the effort with six kills, and Wilmot had seven kills of his own.

“We got to keep getting better,” Hunt said. “The team that’s going to end up winning is the team that improves the most throughout the season and displays good volleyball.”

The Waves look to continue to build this momentum versus California State University Northridge on March 16.