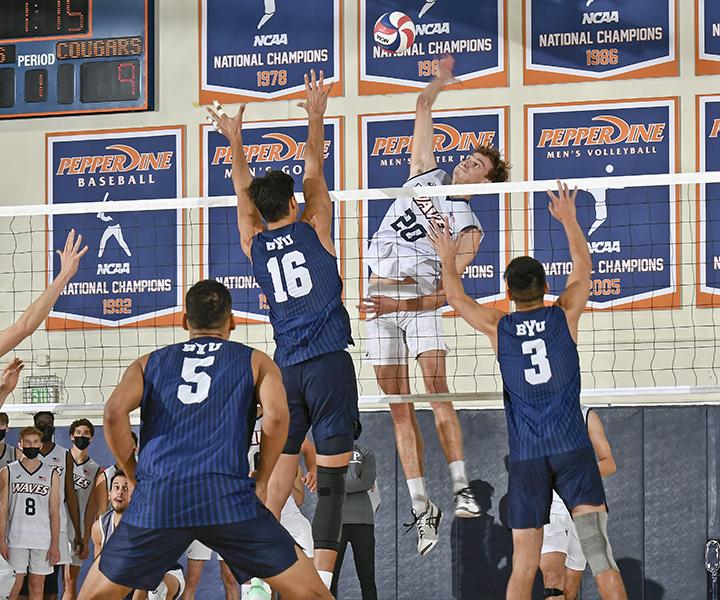 Redshirt senior middle blocker Austin Wilmot (No. 20) elevates to swing against a BYU block including Felipe de Brito Ferreira (No. 16) and Wil Stanley (No. 3) on Friday, March 19 in Firestone Fieldhouse. Wilmot led the Waves throughout the weekend, totaling 24 kills on a .570 hitting percentage in two losses to the Cougars. Photo Courtesy of Martin A. Folb | Pepperdine Athletics

Pepperdine Men’s Volleyball got two cracks at No. 2 BYU in a matinée doubleheader March 19 and 20, in Firestone Fieldhouse, but the Cougars proved to be too much for the Waves in both matches. The losses dropped the Waves from No. 4 to No. 5 in the American Volleyball Coaches Association’s most recent national poll.

Similar to the teams’ two February matches in Provo, Utah, the Waves could manage only one set victory over two days, losing in four sets on Friday and three on Saturday.

“We weren’t as good as we need to be,” Head Coach David Hunt said following Saturday’s loss. “On top of that, when you have the talent that they do and they’re well-coached and all those things, it makes for an uphill battle if you’re not controlling things on your side.”

The Waves dropped their first home matches of the season and first conference matches at home since 2018.

Pepperdine landed the first punch of the weekend, taking the first set on Friday 25-20 and snapping a BYU streak of 15 consecutive sets won.

In the set, the Waves silenced powerful Cougars senior outside hitter Gabi Garcia Fernandez, who had 6 kills on 16 swings.

Wilmot is hitting his stride as the Waves enter the home stretch of the season. The defending AVCA National Player of the Week led the Waves in kills (16), attempts (25), and hitting percentage (.520) in the match and was second in blocks (3).

Wilmot said his chemistry with freshman setter Bryce Dvorak has improved dramatically throughout the season.

“We started off on maybe not a rough start, but something like that — I don’t know if the confidence was really there to push the middle too much,” Wilmot said. “I didn’t even look at the stats today but I probably got like 25 swings, and that’s just insanely different.”

After the first set, the service and serve receive game cost the Waves. In sets two, three and four, the Waves had 2 aces and 14 service errors, while the Cougars delivered 9 aces with only 10 errors. Both teams were smashing 70-mile-per-hour serves, but the Waves weren’t getting the ball over the net and into the court.

“Volleyball coaches around the country talk about the importance of the serve-pass battle, and we lost that tonight,” Hunt said. “We’ve missed too much and they got too many free points, so we’ll try to clean that up a little bit.”

Pepperdine senior outside hitters Spencer Wickens and Alex Gettinger began to heat up after a quiet first set, but the Cougars also caught fire, hitting .562 in the second set. The Waves lost the final point of the second set on a service error, their seventh of the set, falling 25-17.

“In the serve and pass battle, they’re ripping their serves and getting us way off the net,” Wilmot said. “They controlled our serves a lot more after the first set. The first set was a little tough for them but after that they were on fire. It’s hard to slow a team like that down when they get like that.”

The Waves started slow in the third set, falling behind 6-1 and 10-3. BYU outside hitters Garcia Fernandez and Davide Gardini began to control the pins, complemented by senior middle blocker Felipe de Brito Ferreira, who was simply smashing the ball onto the ground. De Brito Ferreira finished the match with eight kills on nine attempts.

“That’s a good team over there,” Hunt said. “They have two international-level players on the pins, [Zach Eschenberg] does a nice job for them cleaning up a lot of junk, and they got good middles, and they’re a veteran team.”

Pepperdine battled back, closing the gap in the set to 23-20, but eventually dropped it 25-21 when redshirt senior outside hitter Noah Dyer‘s pass hit a beam on the Firestone Fieldhouse ceiling and deflected directly to the ground for set point.

The Waves hit a slightly better percentage than the Cougars in the third set but also conceded four aces.

Pepperdine hit a solid .308 in the match, but BYU was marginally better, hitting .343.

“They’re just killing a few balls more than us,” Hunt said. “There are out-of-system and medium passes that they’re killing as well, so we got to figure that part out.”

BYU pulled away in the fourth set, winning it 25-17, to complete the victory.

With a young roster and hurried preparation, Hunt said the team is still working on skills that they would normally develop in the fall season.

“This would be around day 100 with our team, and the reality is this is day 60 with our team,” Hunt said. “We’re trying to still work out some things and let some guys show what they have when they are in practice.”

Pepperdine began Saturday’s match with a different lineup, inserting freshman libero Trey Cole and moving Dyer from libero to outside hitter. This allowed the team to use a four-man serve receive formation periodically, which held the Cougars to two aces in the match.

Steele and Wilmot continued their hot streaks, notching four and three kills, respectively, in the opening set. The pair finished the match with a combined 17 kills. Wilmot also had a big solo block that gave the Waves energy to attempt a first-set comeback.

The Cougars took the first set anyway, jumping out to a 9-4 lead and holding off the Waves even after Pepperdine tied the set at 18. Garcia Fernandez and Gardini paced the Cougars in the set and match.

The second set was ugly for Pepperdine, as the Waves hit .136 to BYU’s .684 and the visitors took the set 25-14. The Cougars knocked the Waves off the net, recording 11.5 blocks throughout the match to Pepperdine’s 5.

The different lineup provided energy, but the Waves recorded seven service errors and zero aces, dropping the set 25-20. The performance from the service line was an issue again, as the team had 15 service errors total.

“I don’t think serving is ever an easy fix, but it’s definitely something that we got to invest some time into and try to solve that,” Hunt said. “On a team like BYU that’s so comfortable being out of system or off the net, you got to be a little bit smarter in terms of the risk-reward that we get from there.”

Steele said the team needs to serve more balls in practice to work on the issue.

“I look at my freshman year — we were a fantastic serving team and we spent a ton of time every practice serving,” Steele said. “And so I think that’s going to be a big thing for us moving forward.”

Eleven different players saw the court for Pepperdine on both Friday and Saturday, including three true freshmen and redshirt freshman, as Hunt continues to fine-tune the lineup and utilize his team’s depth.

“The guys that have gone in have earned some playing time and we have a lot of really good pieces,” Hunt said.

The Waves, who have won eight of nine matches this season against teams not named BYU, turn their attention to a three-game series March 26, 27 and 28 at home against Grand Canyon University.

“We know that we’re better than the way we played this weekend,” Dyer said. “While [BYU] played well, we just didn’t. We weren’t quite on our game and so that’s on us, but we’ve got another month of training.”

Three matches in consecutive days is a rare challenge, and the No. 7 Lopes are not to be overlooked, having swept BYU in February and beaten the Waves in 2020.