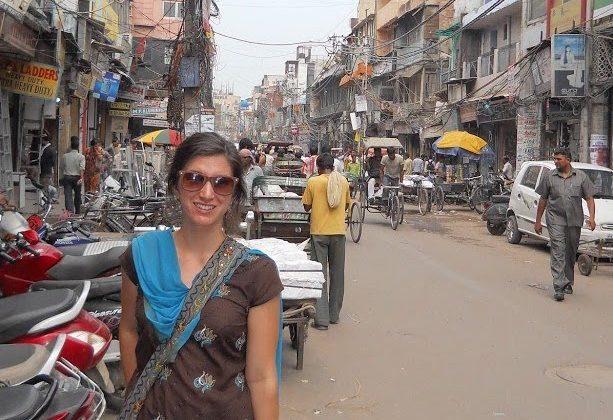 Karie Riddle walks on the streets of the old town center of New Delhi, India in summer 2013. Riddle studied Hindi and did exploratory research before becoming a professor at Pepperdine in 2021. Photo courtesy of Karie Riddle

Karie Riddle, assistant professor of Political Science, was on a path to becoming a policy maker when she took a detour that led to teaching. When reflecting on her first semester at Pepperdine, Riddle said she ended up right where she was meant to be.

Riddle — a new tenure-track professor — said she aims to bring out the best in her students. Hoping to create an engaging learning environment, Riddle has used her short time at Pepperdine to connect with students and share her passion for political science, Christianity and feminism.

“I expect a lot, but I will work really hard to help you meet my standards,” Riddle said.

Riddle is a feminist researcher and encourages open-mindedness and independent thought among her students. Riddle teaches a first-year seminar called “How to Change the World” and two courses called “The Politics and Government of Developing Areas” and “Women in Politics.” Riddle has also written papers about international women’s peace-building groups in Northeastern India — a topic on which she based her Ph.D. dissertation — and she is writing a book on the subject as well.

Riddle is in the early stages of her career, with four years of teaching experience and a semester spent at Pepperdine. She said she strives for a career that challenges her students to question norms and think independently.

After earning her bachelor’s degree in Political Science from Harding University, Riddle said she went on to study public policy at the University of Maryland, College Park. Part of the scholarship Riddle received for her master’s program required her to be a teaching assistant to undergraduates, which she said “accidentally” sparked a desire to be a professor.

“That was my first experience really doing anything like leading in a classroom, and I fell in love with it,” Riddle said. “I thought it was so much fun to think about different creative ways to get students to approach topics — and also really was enjoying the one-on-one meetings with students.”

As she became more interested in teaching, Riddle said she decided to pursue a Ph.D. in Peace Studies and Political Science at the University of Notre Dame. Since then, Riddle aspired to work at Pepperdine.

“The fact that Pepperdine is Christian is really important to me,” Riddle said. “I went to a Christian school, and I’m a person of faith, and that’s an important part of my teaching and my research, so being able to be my whole self in my job is important.”

Incorporating Feminism into her Career

Riddle said she loves teaching her Women in Politics course, which stems from her background studying feminism in Christianity. Growing up in the Church of Christ, her childhood church justified silencing women with biblical scripture, and this pattern continued into her years as a young college student, Riddle said.

“I had professors who were actively saying, ‘Christian feminism doesn’t exist — there’s no such thing,’” Riddle said. “For some people, that would make you give up on it, but I have a decently large rebellious streak, and so the more that was happening, the more I was like, ‘No, this is not OK. I have to figure out how to get these things to go together because Christianity and feminism have to be able to go together.’”

When she gave herself permission to interpret the Bible differently from how her church taught her as a child, Riddle said she reconciled the idea that feminism and religion can go hand-in-hand. She said this made her feel empowered, and Riddle hopes to serve as a mentor to young women while continuing to educate herself on the evolution of feminism in society.

“I’m still very much working my way through some of these ideas too,” Riddle said. “Especially in terms of learning more about the history of how we got to where we are — that’s still a journey that I’m on, so I don’t feel like I have the answers.”

As she continues to further her teaching career, Riddle said she appreciates the University supporting her research.

“I was really impressed by the amount of research funding that’s available for Pepperdine faculty,” Riddle said. “When you’re a tenure-track professor at Pepperdine, you get one course release every year until you get tenure, and that gives you a lot of extra time to focus on your research.”

In her Women in Politics class, Riddle said students began asking questions about how the class relates to faith. Students reaching out to learn from what Riddle has spent much of her life researching was exciting, she said.

“I’ve been in their shoes on a Christian campus while caring about feminism, and I didn’t always feel like I had the resources I needed to be able to push back in the ways that I wanted to push back,” Riddle said. “So feeling like I can help mentor some students on precisely those questions just makes it makes it all worth it — it makes it extremely rewarding.”