Danica Christy smiles for a photo at the Malibu Pier. Christy said she is planning several events for Crossroads Gender and Sexuality Alliance as its event coordinator. Photos courtesy of Danica Christy

Junior Psychology major Danica Christy serves as the event coordinator for Crossroads Gender and Sexuality Alliance. Christy is in the midst of planning a Valentine’s Day party and a big formal for the end of the year.

Crossroads GSA is a student-led organization that provides a space where all LGBTQ+ students and allies can gain loving support and engage in dialogue on LGBTQ+ matters, according to its Peppervine page.

“Crossroads is a really new club and so we’re still kind of finding our footing,” Christy said. “As of right now, it kind of started as more of a support group.”

As a member of the executive board, Christy said she hopes to transition the club into a place of celebration.

“Now we are trying to shift more in the way of celebrating everyone’s identities and just having it be a fun place for gay people and allies to come together,” Christy said.

Pepperdine is sometimes known for being one of the most LGBTQ+ unfriendly schools in the nation. Because of that, Christy hopes to provide a safe community for all students with Crossroads.

“[Crossroads] is a place to have fun, learn a little bit about each other’s identities and each other’s experiences,” Christy said. “Just offer a completely safe and affirming space to get to know each other and make friends.”

To accomplish providing such an inclusive atmosphere, Christy said the Valentine’s Day event will celebrate friendship and not the traditional romantic relationship.

By reframing a heteronormative and very monogamous holiday to a celebration of love for one’s friends, Crossroads can foster an inclusive community, especially for the LGBTQ+ population, Christy said. 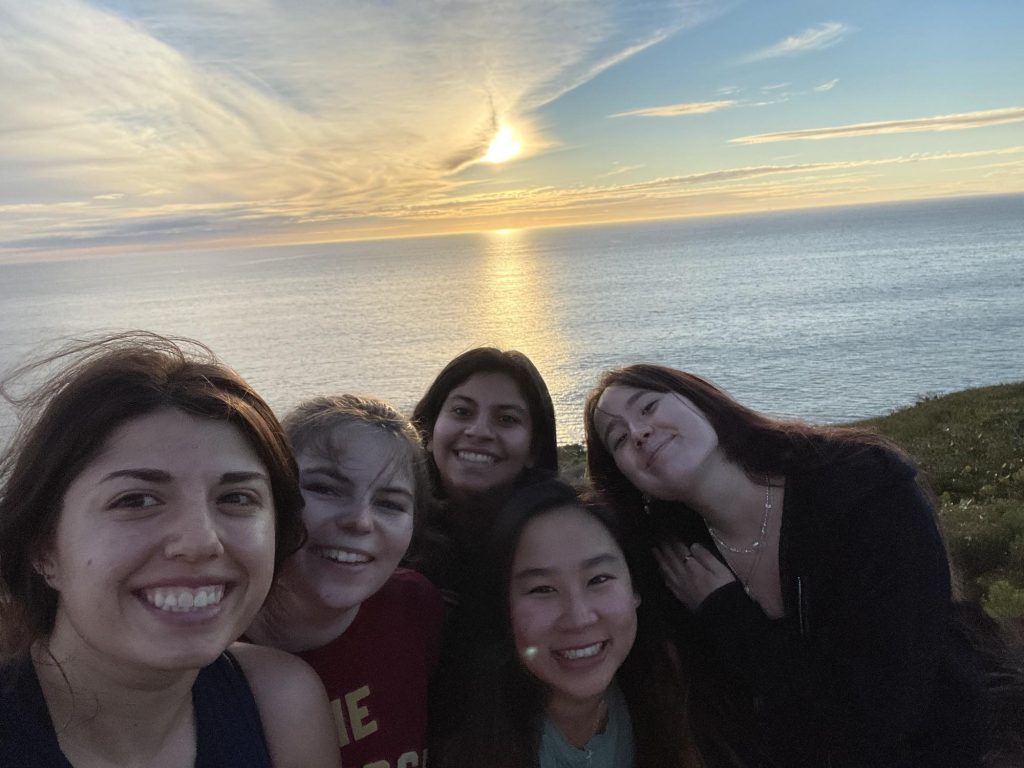 Christy and her friends pose for a selfie by the ocean. Christy said she made some of the greatest friends at Pepperdine.

This Valentine’s Day event by the Crossroads is becoming more of a tradition, as Christy said she experienced something similar as a first-year student two years ago.

“It was so much fun, I met people there and it’s still one of my really fond memories from that semester before we got sent home,” Christy said. “It’s just another opportunity for people to have a really positive memory to spend with their friends and many people.”

That inclusive tradition continues in the way Crossroads takes care of its members, too. Christy said in a small scale, the e-board members are fully encouraging of their members whatever their concerns may be.

“We want to be there to support them, the same way our e-board, when we were younger, supported us,” Christy said.

On a larger scale, Christy said the club hopes to influence the student experience. Some of the initiatives include improving Fraternity and Sorority Life recruitment experiences for LGBTQ+ students, advocating for a more inclusive place for non-binary students in the language department and making a systematic change by getting rid of the University’s statement on sexual relationships.

Christy said she has had both positive and negative experiences, therefore, her time at Pepperdine so far had been “dichotomous.”

Due to a large part of her identity as a lesbian being invisible, Christy said she sometimes does not feel fully herself or is not seen as her full self. She said she is on guard at those times.

“The big thing is for students to just not make assumptions based on their first glance of or conversation with someone,” Christy said.

On the other hand, Christy said her favorite moments were spent with the friends and faculty members she met here.

“It’s been so enjoyable and I will cherish it for years,” Christy said.