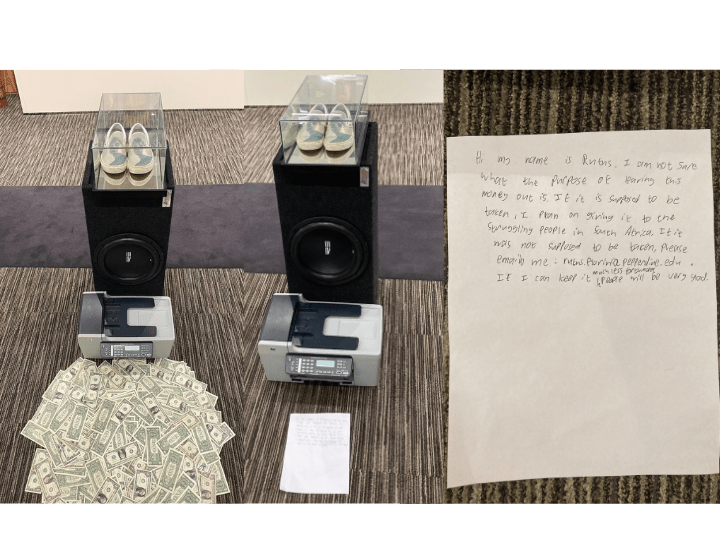 A series of three photos show junior Luke Knox’s original sculpture (left), the sculpture after sophomore Rufus Florin took the money from it (center) and the note Florin left in the money’s place (right). Knox said he thought people might take money from his sculpture little by little, but Florin proved Knox wrong by taking all of the $200 just hours after the Junior Thesis Exhibition began.

On Thursday, Nov. 19, junior Art major Luke Knox displayed $200 as part of his sculpture to viewers at the 2021 Junior Thesis Exhibition in Payson Library. Hours later, the money was gone. In its place, a note written by the person responsible for its disappearance.

The Department of Public Safety later responded to a report of the missing cash.

Knox said he created “The Printer Panopticon” sculpture with an open mind about how viewers would interact with it. He was surprised the money disappeared so quickly, Knox said, but he appreciated that someone had engaged with his art.

Knox’s piece went through a series of events and evolved into its final form, now on display on the second floor of Payson until Dec. 12, according to Pepperdine Libraries.

DPS became involved when an unidentified individual reported the missing money to them at approximately 9:30 a.m. on Nov. 19, wrote Ariel Sarreal, assistant director of Public Safety, in a Nov. 21 email to the Graphic. Once notified, a DPS officer responded and began an investigation.

Knox said he noticed the money’s disappearance when a friend showed him a photo they took of the sculpture with the note after their 8 a.m. class Nov. 19. The student who took the money, sophomore Rufus Florin, had also messaged Knox through Instagram letting him know he took the money.

Knox replied to Florin’s Instagram message and asked Florin to return the cash because the money was part of the sculpture. Knox said he wanted people to see it because the exhibition had been up for less than a day.

Florin returned the money to the art sculpture in Payson later that morning, Knox and Florin said. Knox later learned a DPS officer picked up the $200 from the art installation after Florin put it back.

DPS collected the cash for safekeeping, Sarreal wrote. Knox then picked it up from the office a few hours later.

“It’s Public Safety’s privilege to support students’ freedom of expression through their art, film and stage productions and other activities,” Sarreal wrote. “Our mission is to do so while maintaining a safe and secure environment throughout campus for our community and their property.”

Florin said he saw the money while in a workshop for international students in Payson Library and was unsure if it was part of Knox’s sculpture. For 30 minutes, Florin contemplated whether he should take the $200 because he said he did not intend to steal or be dishonest.

“I decided I’d hold on to it, and I decided I’d also send a DM to the artist just asking — because I saw all that money on the floor and I thought, ‘This has to be a social experiment,” Florin said.

Coming from Cape Town, South Africa, where he saw poverty and struggle, Florin said he wanted to donate the money to children in South Africa if Knox allowed him to keep it.

“This is money that I could do something significant with back home,” Florin said. “Someone else might come to take the money and then every single night that I go to sleep for the rest of my life I’m going to be like, ‘I missed out on this opportunity.’ But, in my head, I was like ‘Money on the floor must be a social experiment.’”

It was interesting, Knox said, how Florin viewed his sculpture as a test.

“Art is interactive, and it gets people talking,” Knox said. “I just thought it was cool that he had the courage to just take all of it; he didn’t leave any of it.”

When Knox prepared his sculpture in the library, he knew there was a chance people might take the money, he said. However, Knox pictured people taking a little at a time, rather than all at once.

“I’m not mad at the idea of people taking it,” Knox said. “I do think that the interesting thing is that if it wasn’t money, people wouldn’t, I don’t think, take it.”

The sculpture consisted of a pair of worn, customized Vans in a glass case, placed on top of a black speaker — mimicking a pedestal — and the $200 in one-dollar bills coming out of a “money” printer. Along with this sculpture, Knox displayed five more art pieces.

“It’s like a story of my life,” Knox said. “It’s the same thing as the paintings — all of those have stories, and all of those, I could tell you exactly what was going on in my life when I made them or why I made them. It’s just a cohesive visual of times in my life.”

Knox said he noticed how people often use credit cards rather than cash. This observation sparked an idea to incorporate $200 of cash in the sculpture.

“We never actually see the money, so seeing a pile of cash in front of you is a rare thing, and when you do, you’re bound to have a reaction to it,” Knox said.

A few of his peers were shocked by how much money he was willing to use for his piece, Knox said. He sees how much power and value people place on pieces of paper that represent a currency.

“A pile of cash in the middle of the floor says something that no words could say,” Knox said.

The Evolution of the Sculpture

When Knox picked up the cash from DPS on Nov. 19, he said, a DPS officer had kindly asked him to not put the money out in the open again. As a result, Knox said he began thinking about what else he could have coming out of the printer.

In place of the cash, Knox set photos of Florin holding the cash and the DPS officer picking it up Nov. 21. However, Knox did keep the $200 as part of the sculpture but placed it in the glass case with the shoes instead.

“I was unaware that pictures of Public Safety were added to the exhibit,” Sarreal wrote. “It seems the artist views our interaction to be a part of the installation’s story and added the pictures.”

Knox did not expect his piece would gain new meaning after displaying it for the first time in the exhibition, he said.

“It showed me that your art is never going to fully belong to you, unless you just let it rot in your house,” Knox said.

Knox appreciates the progression of the original sculpture — having real money coming out of a printer to photos of people taking the money, he said.

“I just want to keep evolving this thing,” Knox said. “I think it’s a cool space.”

“Art decides the way the world looks, it changes how we behave and it changes our whole mindset,” Knox said. “If you were looking at gray walls all day, you would feel much different than if you were surrounded by art all day, so it’s something that isn’t saying anything to you or touching you physically or any of those things, but can change the way you feel.”