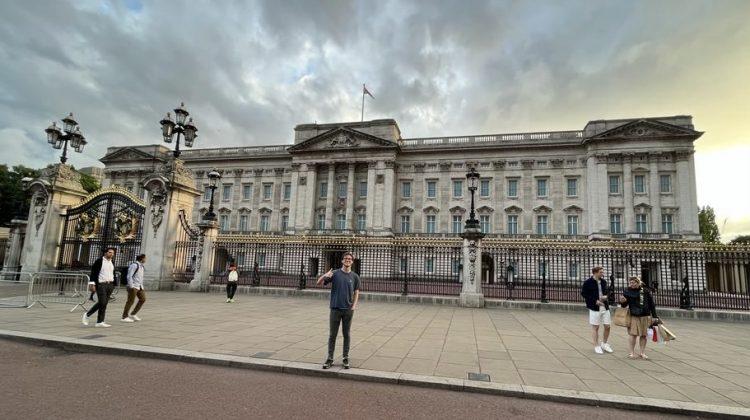 Sports Assistant Editor Alec Matulka stands in front of Buckingham Palace in Westminster, London in June. In a vast majority of photos from his time in Europe, Matulka gave the camera a decisive thumbs up. Photos courtesy of Alec Matulka

A few days before my flight from Seattle to London, my dad gave me a piece of advice.

As always, I had absolutely no idea what he meant. I was tempted to shrug it off.

Then I thought about it. My dad lived in London for several years growing up. He worked at the Whitehorse Pub near Piccadilly. He watched football, went to pubs and listened to The Who. To top it all off, he can do a very convincing British accent when he wants to. So, I was pretty sure he knew what he was talking about, even if I couldn’t decipher exactly what that was.

“Savor the experience, and make it your own.”

London is a city of over 8.9 million people. By my dad’s logic, London is also 8.9 million things. How do you fit that entire experience into two months? You don’t, obviously. You just try your best.

My first day in London I went for a walk through the South Kensington neighborhood, trying to forge my own experience one block at a time. I stopped at a Pret A Manger, an iconic to-go sandwich shop, and got a brie, basil and tomato sandwich. I had an absurd number of those sandwiches over the next two months.

I had a few bucket list items to cross off — try beans on toast, eat a scone and see a Premier League game. The first Saturday I was in London, I swiped my Oyster Card and took the Tube over to the London Stadium, where I watched West Ham United battle Manchester City in a thrilling 2-2 draw. Fifty-thousand of my closest friends were in attendance.

I saw Ben (the big one), walked along the River Thames and wandered around Buckingham Palace. Sadly I never saw Her Majesty The Queen, even during her Platinum Jubilee. A friend and I chose to take a day trip to Bath, Somerset, rather than go to the parade.

One of my favorite days came a few weeks into the program. A group of us took the train to Dover — on England’s south coast. We took in the views of the white chalk cliffs from sloping emerald fields, which cascaded into the aquamarine English Channel. I laid down in the grass and watched seagulls dance on the gusts of wind. Then I went back into town and drank a Guinness.


Our program did two or three group dinners every week — held at various restaurants in South Kensington. Among the millions of people in the city, it was nice to have a smaller community to rely on. Whatever your traveling experience is going to be, it’s sure to have highs and lows, and you’re going to need people to see you through.

Millions of things, millions of people — it could be a lot. I had to escape occasionally. On the second weekend, a friend and I travelled to Cardiff, Wales. We walked in circles around the city center and met a few local university students who delighted in our American accents.

During the program’s fifth week, three friends and I went to Prague, Czech Republic. We spent two days roaming the streets of the old town, exploring historic castles and bridges. We drank a Czech beer called Pilsner Urquell and ate fried food. We flew back to London on Thursday, then, less than 24 hours later, a larger group of us flew to Dublin, Ireland. I remember only a few of those plane rides — most came and went in the blink of an exhausted eye.


My last stop in Europe was visiting family in Edinburgh, Scotland. It’s a city with an immense and vibrant literary past. In the summer, when the daylight lasts about 20 hours, it’s easy to see why. I’d sink my head into my pillow around midnight, and out my window I‘d see the shimmer of dying light over nearby rooftops.

While I was there, I went to the Edinburgh Writers Museum, which had a section on Robert Luis Stevenson. There was a quote written on a wall in one of the displays that made me smile.

“I travel not to go anywhere, but to go,” Stevenson wrote. “I travel for travel’s sake. The great affair is to move.”

You’ll go where you go in life, you’ll see what you see. As long as you remember to savor what it is you’re doing, it’ll turn out OK. You won’t have to work too hard to make an experience that’s unique and your own — that’ll come naturally.