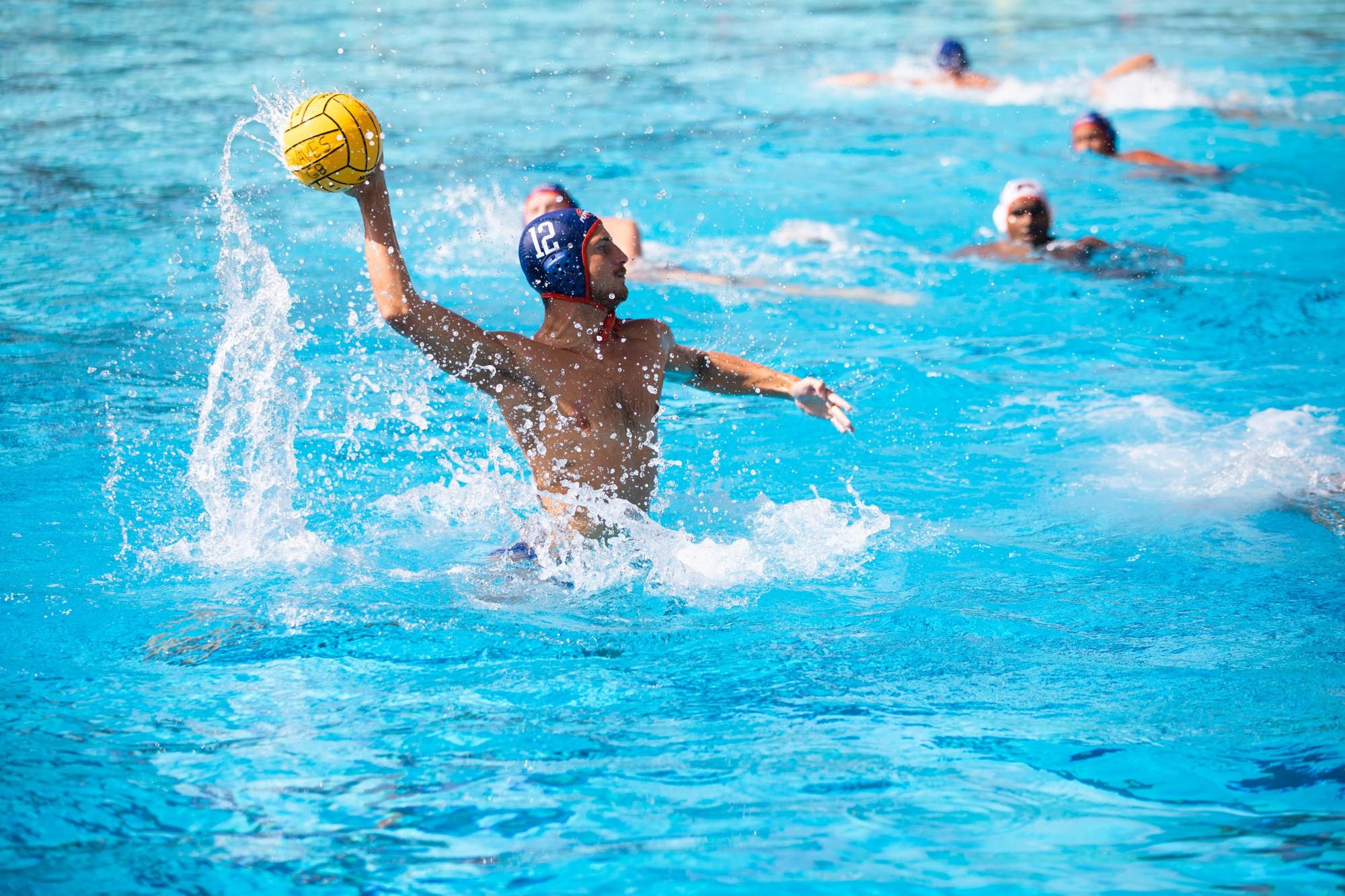 Senior attacker Balazs Kosa readies a shot against University of Pacific on Oct. 23. Kosa was one of the players recognized during the Senior Day festivities. Photos by Ryan Brinkman

Pacific is a thorn in Pepperdine’s side in recent memory. Pepperdine has a 14-18 record since 2005 and remain on a five-game losing streak against Pacific, with a recent 14-9 loss during the MPSF Invitational on Sept. 18.

“They got a lot of really great shooters,” Head Coach Terry Schroeder said. “They play a very disciplined game. They’re very skilled; they’re a very talented team for sure.”

Pacific came out the gates aggressive, firing four shots in the first four minutes of the game, with two successfully going in the net.

The Waves responded with two goals of their own. Sophomore center defender Nico Tierney got the Waves on the board at the 5:10 mark. Freshman attacker Clay Kaneko found an opening on the left side and squeezed in a goal, assisted by Tierney.

“We’ve got some great shooters too,” Schroeder said. “Our centers are strong — our centers didn’t produce as much today — but that’s gotta be a big part of our game going forward.”

The Waves came out of the second quarter charging with offense. Tierney got on the board less than a minute into the quarter. The Waves swung the ball around the perimeter, forcing the Tiger’s defense out of position and Tierney found the bottom of the net.

Sophomore attacker Jake Howerton and sophomore attacker Christian Hosea both scored critical goals in the second quarter, providing the Waves with a 3-0 scoring run to get back in the game. The Waves remained aggressive throughout the game while they attempted a total of 31 shots.

“We gotta get our centers back into the game offensively,” Schroeder said. “We have an equal number of good shooters and people who can put the ball into the cage.”

With the game tied at five apiece at the half, the third quarter proved to be the turning point. The Waves committed six of their 13 exclusions in the second half, providing the Tigers with an ample amount of power plays.

“It’s just water polo, it happens,” Kosa said. “It’s such a subjective sport, so we can’t do anything about it. We could’ve been a little less hard on them, but it’s water polo.”

The Waves struggled with their offense in the third quarter, as Pacific outscored them 6-2. Hosea responded with a goal at the 6:35 mark and found success on the right side. The third quarter ended with a tally of 11-7.

“They came out of half time with a little more energy. That was a death quarter for us. We went down 6-2; we got beat that quarter,” Schroeder said. “And we had a goal at the end of the quarter on a six on five, that was a real turnaround.”

With the Tigers holding a sizable lead, the Waves found themselves playing catchup for the rest of the game. The Waves tried to mount a furious comeback in the fourth, scoring two of their three goals within minutes of each other.

Hosea found the opening on the left side as the Waves drew a rare power play, assisted by Howerton, with the score at 12-9.

The Waves had several opportunities to organize a comeback. Marco launched a pass the length of the pool after noticing Ferrari got ahead of the defense. Ferrari quickly turned around and missed a close shot after the Tigers recovered defensively.

Several possessions later, Ferrari played aggressive defense, read the passing lanes and gobbled up a steal. Ferrari found himself ahead of the pack in a transition opportunity and fired a shot that missed the goal. 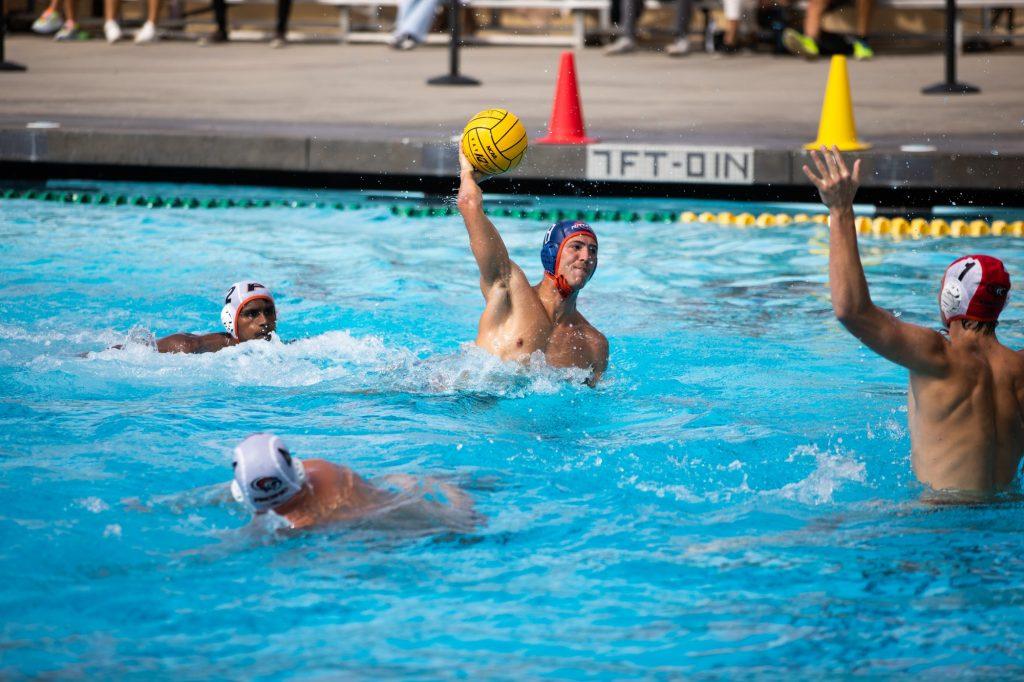 Surrounded by Pacific players, a Pepperdine player (middle) rises to launch a shot at net. Pepperdine outshot Pacific 31-30, but couldn’t capitalize on their chances.

Those missed opportunities would tell the tale of the game. The Waves were unable to capitalize on several power plays, and with time running out, the Waves did not find their stride. Ferrari managed to score a goal as the clock expired, but by then, the game was already over.

“Sometimes it’s just the day,” Ferrari said. “The ball just sometimes bounces off the post and goes out. I can’t really hang my head on it — I just gotta keep getting better and practice it, and next time, in a bigger situation like the GCC championship, we’ll be making those. Just stay the course, keep working hard and they’ll go [in].”

The team had been riding a seven-game win streak, with impressive wins against UC Irvine, Concordia University Irvine and No. 2 California.

Given that Senior Day was full of emotions, Kosa said he’s been grateful for the opportunity playing at Pepperdine has given him.

Ferrari said he hadn’t given much thought to the possibility of coming back and using his fifth year as the season ends.

“I love this sport, I love this team, I love this family and it’s definitely going to be hard for me to step away,” Ferrari said. “But I haven’t made up my decision yet. I’m just trying to give what I can each and every day of this season.”

The Waves close out their regular season on the road with three Gold Coast Conference games left and five game in total. For the team, Schroeder said every game moving forward will be equally important as they fight for the final standings.

“All this is preparation for our tournament,” Schroeder said. “At this point in the season, the tournament is the only thing that matters. Ultimately, we gotta be ready to play three good games that tournament.”