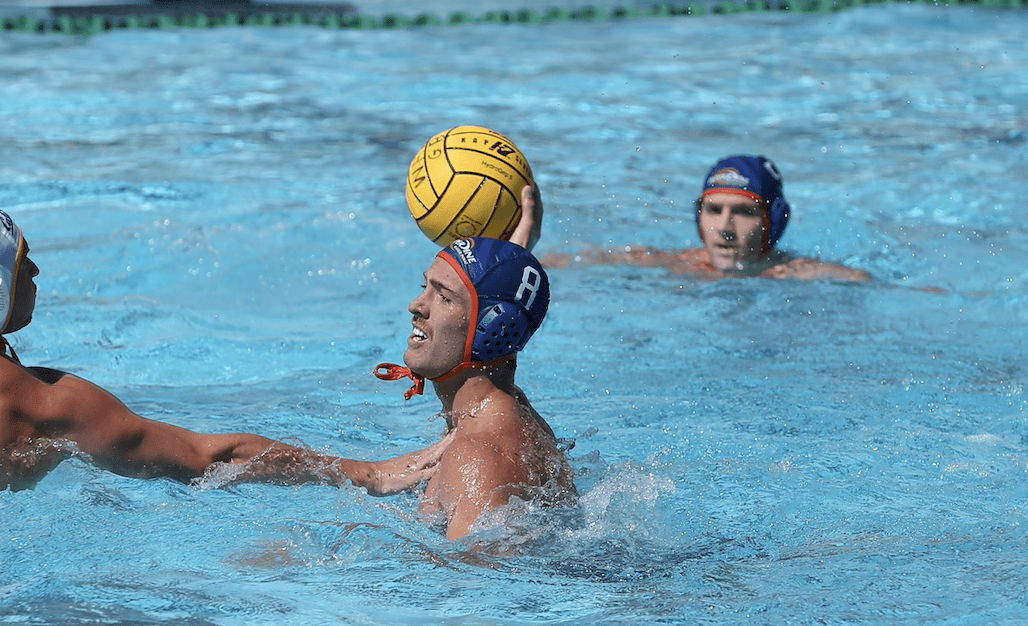 Pepperdine looks to attack against No. 2 UC Berkeley. The Waves are now 10-7 overall and currently ranked No. 8. Photos courtesy of Jeff Golden

After a staggering start to Sunday’s game, the Pepperdine Men’s Water Polo team (10-7) capped the 3-0 weekend off with a huge win against No. 2 UC Berkeley (14-2), giving them momentum heading into conference play.

Before Sunday’s matchup, the California Golden Bears had only one loss on the season to USC a week prior, and the Waves hadn’t seen a win against them since 2019. The last time the Waves beat Cal at home was in 2008, making this game more meaningful.

“We’re just trying to get the guys to believe that we can play with and beat a team like that,” Head Coach Terry Schroeder said. “We’ve seen the guys progress and grow as a team so as a coach that makes you very happy.”

The Waves came out with an aggressive first quarter that started with a quick goal from senior attacker Sean Ferrari at the 7:18 mark, followed by senior attacker, Balazs Kosa’s goal just over a minute later.

The Waves start proved to give them the momentum they needed as sophomore attacker Jake Howerton added one of his five game goals at the 4:19 mark off of a solo effort down the left side.

“Just like any other game, you come in and you game plan and it really came to us today,” Howerton said. “Everything came together because we’ve been working so hard this season.”

Senior center Nicholas Fichman, junior center Austin Smit and sophomore center defender Nico Tierney all added to the attack with a goal each to give the Waves a 6-3 lead to end the first quarter.

In the second quarter, the Waves started strong with a quick goal from Howerton, followed by another goal from Kosa after a perfect pass from Tierney.

There was a sudden change in energy when the Waves saw shots on the goal just wouldn’t go in. Their shots flew strong, missing both high and wide, and the Bears’ goalie made a nice save at the four minute mark to maintain their attack.

The Waves faced a five-minute drought without a goal while the Bears saw three go in, making it 8-6 for a Pepperdine lead.

“Every game has runs, and we knew that Cal wasn’t going to give up,” Schroeder said. “They came back hard but it was key for us to be able to withstand that run.”

To end the Bears’ run, Howerton provided the Waves with an answer with his second goal of the quarter at the 2:04 mark. Fichman added to the attack after he scored an electrifying goal with a second left on the shot clock from a Tierney assist.

To finish off the quarter, Howerton scored one more time with 35 seconds left to play, but the Bears responded with a goal of their own to close out the half, making it 11-7.

The Waves didn’t start the third quarter as strongly as the first two, while the Bears saw themselves firing first and shifting the energy in their favor. A couple Waves missed shots were capitalized on by another three of the Bears’ goals bringing them within one point of the Waves and a 11-10 score.

“In moments like that where you start to see the momentum shift, you have to keep fighting through it,” Schroeder said.

The Waves did just that after a foul on Ferrari gave him the penalty shot which he scored. The 12-10 lead was quickly decreased after another Bears’ goal at the 2:20 mark, but Kosa gave the Waves another goal to close out the quarter with a 13-11 lead.

The fourth quarter made for a nail-biter after the Bears came out with a quick two goals to tie the game. Howerton had the answer, yet again, to give him his fifth goal of the game and Pepperdine a 14-13 lead.

“In the end of the game like that you’re not looking for yourself to score,” Howerton said. “You’re looking for the team to score and anything that’ll help the team win.”

The Bears came down to try and decrease the lead but a huge save by redshirt senior goalie John Claude Marco allowed for an attack in the other direction and a Tierney goal for a 15-13 lead.

“In my mind, I know I have to make big saves for my defense, mostly because I give the energy to the offense when I make key saves,” Marco said.

The latter part of the fourth started getting scrappy and a lot more fouls were committed on both sides. Marco had another huge save with three minutes left in the game. He made a quick pass out to Tierney on the right side for a beautiful assist to Kosa resulting in a goal down the middle.

The Bears tried to answer the attack, but Marco made another big save with just under two minutes to play. Following the Bears’ timeout, they were able to score a goal bringing them within two points of the Waves.

Time was in the Waves’ favor and after a game of keep-away, they closed out the game with a win and a bunch of cheers to follow. As the horn blew, the Waves instantly started splashing the water while their teammates outside the pool hopped out of their seats to celebrate.

“We’re a special team, we thought of them no differently than any other team,” Marco said. “We just wanted to come out and play our best.”

Howerton added that a game like this was huge for them mentally heading into conference play.

The team now has the week to prepare for their next game where they will play Saturday, Oct. 9, at California Baptist (9-8).