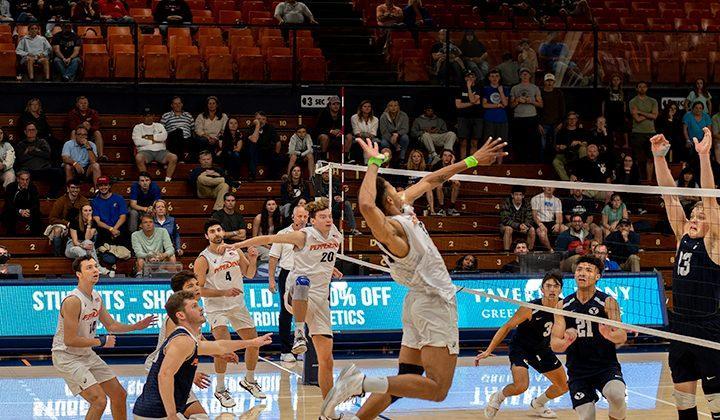 Graduate student outside hitter Jaylen Jasper elevates for a kill at Firestone Fieldhouse on March 26. Jasper led the Waves in both contests with 35 total kills. Photos by Brandon Rubsamen

Prior to the contests, the Waves had gone 0-5 against the Cougars in the 2021 season. Both teams looked to establish their position in MPSF seeding before the league tournament.

“[On Friday] we weren’t scoring points as easily,” Head Coach David Hunt said. “I thought we were getting frustrated as well. So we managed the expectation piece a lot better. And ultimately, we did a nice job battling a good team.”

Pepperdine lost their first contest to BYU on March 25 in Firestone Fieldhouse.

“The match was a little bit frustrating, but the guys battled,” Hunt said.

“Anytime you give your opponent over 50 points with serving errors, hitting errors and ball-handling errors it’s frustrating,” Hunt said.

Graduate student outside hitter Alex Gettinger kept swinging at the ball hard despite being blocked twice in a row in the second set. Although Gettinger subbed out, he returned in the fourth set with a 69.1 miles per hour service ace to regain his confidence.

“I got taken out and coming back in I found ways to contribute, so that’s really what matters,” Gettinger said.

The Waves continued to show their aggression despite falling behind in the final set. Graduate student outside hitter Jaylen Jasper hit an angle shot that painted the 10-foot line to tie the score 2-2.

“They competed hard, and it’s a good group,” Hunt said. “It just wasn’t our best performance.”

The Waves’ 24 service errors and 15 service aces marked the contest.

The second match started hot for Pepperdine, as they put up a 5-0 lead thanks to redshirt sophomore opposite hitter Jacob Steele’s three consecutive kills. Momentum quickly shifted as BYU gained a foothold, climbing their way to a 9-12 lead over Pepperdine.

The battling continued in the middle of the first set with Pepperdine and BYU going back and forth. Jasper continued to make his presence known, scoring two kills to tie it up with BYU 15-15.

“My big personal focus was blocking,” Jasper said. “I watched a lot of film with my coaches from the match yesterday. I just noticed I was reaching back in really far and just getting burned on my outside hand. So I just wanted to make sure that I was even if I wasn’t set up in a good spot, I was just going straight over and not reaching.”

Jasper followed through with this goal, matching his five blocks from the prior game in three sets rather than five.

Going into the final portion of the set, the Waves held a small lead over the Cougars through errors, aces, and kills bringing their score to 23-19. Despite the energy of the BYU bench, senior outside David Gardini served the ball into the net, giving Pepperdine the chance to hold the line and win the set 25-22.

“We really played as a team tonight,” Jasper said. “And right here, I think was a perfect example of how good we can be when everything is just firing on all cylinders.”

The second set, unlike the first, started with an intense back and forth between the two teams. While Jasper’s thrilling kill had created the chance for Pepperdine to make a major lead in the game, Gardini fired back with a kill, bringing the score to 5-5.

This pattern continued in the middle of the set with the Waves only ever grabbing a brief 9-7 lead, which quickly turned into 10-10. Graduate student middle blocker, Austin Wilmot helped Pepperdine keep pace with BYU as he scored two lightning-fast kills giving the team a three-score lead.

Pepperdine stoked up the energy as the set concluded. After an astonishing dig from graduate student Spencer Wickens and a well-placed bounce off Jasper’s knee, Pepperdine scored a 3-point lead, making the score 18-15.

Pepperdine won the second set with a score of 25-21

The Waves opened the third set with Steele’s big kill which silenced the Cougars bench. After this, however, Pepperdine gave up three errors in a row to give BYU the lead at 2-3.

Pepperdine and BYU remained locked in trading blows until Wilmot pushed the team ahead with a major block and kill which caused BYU to call a timeout at 15-13.

Jasper’s back-to-back aces stunned the BYU opponents and opened up the end of the third set, setting the score at 18-14 with Pepperdine storming ahead.

After multiple challenges from both sides of the court and sophomore setter Bryce Dvorak‘s tremendous serving, Pepperdine snatched the game-winner from the third set at a score of 25-19.

The Waves play the Concordia Eagles on March 31 in Irvine.