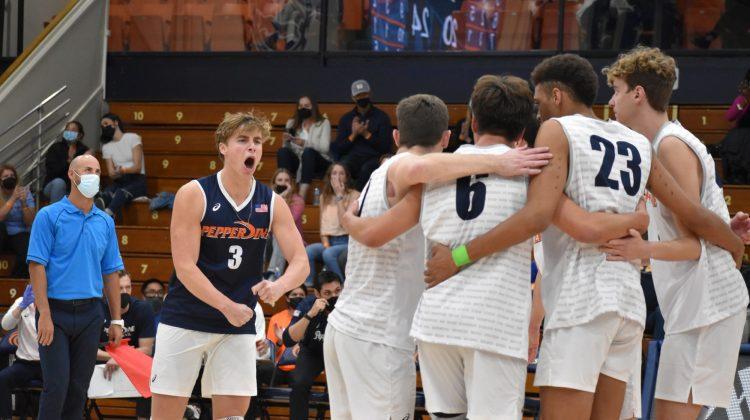 The team gathers after getting in a huge point in the 4th set Jan. 21, against UCSB. This is the only loss Pepperdine has suffered on the season so far. Photos by Mary Elisabeth

After coming off back-to-back-to-back sweeps against Erskine and Princeton University, the Waves looked to improve to 4-0 against the Gauchos but came up short, losing the fifth and final set after being down 2-1.

Pepperdine hit .201 overall throughout the five sets with the fourth set being their best, hitting .560.

The Waves had just 17 attack errors in the first three matches of the season but committed 30 against the Gauchos (2-3) and also hurt themselves with 29 service errors.

The first set was a close one as it was 7-7 after a service error from Wickens and UCSB tied it up.

Later, UCSB took the lead and went on a 6-1 run making the set score 9-14 and they gained a little bit of momentum after Jasper made an attack error. The Waves then went on their own run of 5-1, making the score 14-15 with UCSB still in the lead but eventually tied the set at 16 after an attack error from UCSB’s Haotian Xia.

UCSB had a two-point lead at 22-20, but the Waves won the first set after Jasper’s two kills, and graduate student Austin Wilmot’s service ace claimed three points for the Waves.

The second set was a back-and-forth affair because the set had 12 ties and 6 lead changes. The Waves took a 9-8 lead then the game was tied at 16 after UCSB made a service error. The Gauchos went on a 9-5 run to close the set and made the match 1-1.

The Gauchos also had a good start to the third set, jumping out to a 4-0 lead. They went up by as many as six before Pepperdine rallied late to get within two points. But the Waves wouldn’t close the gap any further and the Gauchos went up 2-1.

With their backs against the wall, Pepperdine played their best volleyball in the fourth set. Despite being down 3-6 early, the Waves made a comeback and at 19-18, Wickens had two straight kills followed by a service ace from sophomore setter Bryce Dvorak, and the Waves eventually put the set away on a Fuller kill.

But the Waves couldn’t carry the momentum into the fifth set, as the Gauchos had seven kills on nine errorless swings, while Pepperdine had more errors than kills. UCSB led 7-6 and then ran off six straight points and ended the match on the Waves’ 30th hitting error.

Crane said the team has a positive mindset going forward and the message spread throughout the locker room.

“Just keep our head up, we’ve got good guys and we practice really hard,” Crane said. “So just having pride in our guys and knowing what we are cable of is really important.”