By Richie Estrella and Brady Johnson 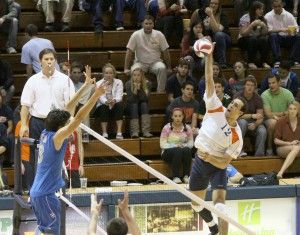 The energy in the Firestone Fieldhouse was high when 8th ranked Waves took the court against 3rd ranked UCLA with hopes of a victory in front of their home crowd.  This was not just a match up of two great teams, but two legendary coaches were facing off as well. Marv Dunphy who has been head coach at Pepperdine for 35 years, and Al Skates of UCLA who is the winnings volleyball coach in the NCAA were competing in a local match-up of two powerhouses. Having only one loss on the season prior to this match, the waves were looking to make their case for a higher national ranking. However, their efforts did not prove to be enough as UCLA ultimately came out on top. The Waves were lead by Senior Middle Blocker Matt Pollock. Pollock had 14 kills and 5 blocks on the night.

His presence was a factor throughout the match as he made the most out of every opportunity he had. Senior outside hitter Chase Ross also had a significant impact with 11 kills and 7 digs. The Waves played well for the most part, but lacked consistency in the areas that mattered.  “Serving and passing are the keys to winning a volleyball match. We have so many big hitters in the front, that when we pass well we’re almost impossible to stop. Consistency in both those is how you win and errors are how you lose, we just had a few too many of them (errors) tonight” Sophomore Libero Michael McMahon, said . The Waves accumulated a massive 18 service errors and 24 hitting errors. These errors gave UCLA far too many uncontested points, which allowed them to pull away with the victory. The Waves play again on Friday against UCSB, where they will look to improve their record at home.

Highlights from the 3-2 victory for the UCLA Bruins squad over the Pepperdine Waves at the Firestone Fieldhouse on Wednesday, February 1, 2012.

Dance in Flight: A portrayal of the dichotomus themes of technology and nature