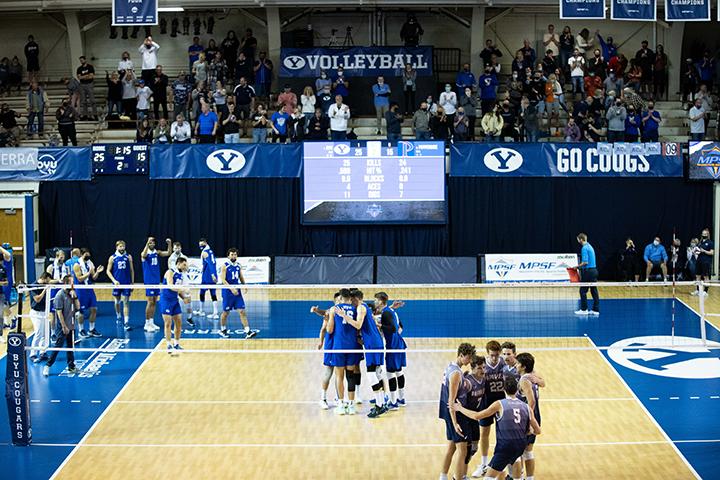 BYU Men’s Volleyball celebrates taking the second set from Pepperdine in the MPSF Championship match April 24, at Smith Fieldhouse in Provo, Utah. The Cougars defeated the Waves in three sets to claim the title.

Pepperdine Men’s Volleyball, the reigning Mountain Pacific Sports Federation champions, entered the 2021 MPSF Championship tournament having not played a match in 25 days due to a COVID-19 outbreak.

This Pepperdine team also included only one returning starter (redshirt senior outside hitter Noah Dyer) from the 2019 MPSF title-winning team.

The No. 5 Waves put together a good showing April 22-24, in Provo, Utah, beating Stanford and No. 6 UCLA en route to the title match, where host No. 2 BYU swept Pepperdine.

“We had the specific challenge of being shut down for a few weeks and not being able to practice six-on-six but nobody feels bad for us,” Head Coach David Hunt said. “We’ve got to play good volleyball and from here on out, there’s good teams.”

In what was potentially the final match in the history of Stanford Men’s Volleyball, the 3-13 Cardinal played a passionate match to challenge the third-seeded Waves in the quarterfinal at Smith Fieldhouse.

Stanford University announced in July 2020 it was cutting 11 of its 36 Division I sports, including its two-time national champion men’s volleyball program. The team’s most recent men’s volleyball national title came in 2010.

Stanford sophomore outside hitter Will Rottman smashed 24 kills on a .500 hitting percentage, but a balanced effort from Pepperdine was enough for the Waves to win in four sets.

Rottman hit .700 in the first set against a Waves team, which features three freshman starters, each making their postseason debut.

“We have to try to replicate a match intensity, so they did a great job in the practice gym,” Hunt said. “They came out and there were some jitters with the first playoff match for a lot of guys, but it was good.”

Senior outside hitter Spencer Wickens, redshirt senior middle blocker Austin Wilmot and freshman middle blocker Andersen Fuller each put down four kills in the first set to give the Waves a 25-22 victory. Wickens, who did not play outside hitter for Pepperdine before this season, was named to the All-MPSF First Team prior to the match.

Rottman remained hot in set two and Stanford hit .408 to Pepperdine’s .172, taking the set 25-21. Freshman setter Bryce Dvorak had 44 assists after two sets, but redshirt sophomore opposite Jacob Steele had eight hitting errors at that point.

“[Hunt] definitely said like, ‘We got to regroup.'” Wilmot said. “That’s not how we usually play obviously. That happens all the time. You see through the matches in the year — we dropped a set in a lot of games, so that happens.”

The Waves regrouped to take the match, winning the third set 25-22 and the fourth 25-19, with Wickens and Steele ending the match as co-kill leaders with 14 apiece. Pepperdine finished with 19 hitting errors in the match but did not allow a single ace.

The April 23 semifinal match served as the season’s tiebreaker between the Waves and second-seeded UCLA Bruins, as well as a de facto play-in match for an at-large bid to the NCAA Championships.

Pepperdine got the final say, winning in three sets, 25-20, 25-23, 26-24. UCLA played without four of its top eight rotation players, who sat out due to COVID-19 protocols, according to the FloSports broadcast commentators.

Steele rebounded from his error-laden Thursday performance with a strong first set, as he notched six kills and an ace in the opening frame.

The second set featured crisp offense, few rallies and plenty of service errors, but again the Waves were slightly better from the service line, with two more aces and four less errors than the Bruins.

Dvorak contributed 11 assists in each of the first two sets, and both teams hit north of .450 in the second set.

“It starts passing, first of all, but it also comes down to Bryce making very good decisions — spreading the ball around, getting everybody involved,” Wickens said. “That’s a tough offense to stop when everybody is being aggressive, everybody’s able to take swings.”

Pepperdine converted 6 of their first 10 swings of the third set, taking a 10-6 lead and forcing a UCLA timeout, but the Bruins battled back behind sophomore outside hitters Cole Ketrzynski and Kevin Kobrine, who ended the match with 17 and 15 kills, respectively.

UCLA forced a set point at 24-23, but a Kobrine service error and a Wilmot block put the Waves ahead 25-24, and the Waves closed the match on the next point.

“Everyone knows what [Wilmot] can do offensively, but he was getting frustrated with himself defensively, and then he comes up with the big stuff,” Hunt said. “It was cool to see Austin be able to respond and get a big play for us.”

The sweep victory was a statement for the young Waves team, which was able to play in front of spectators for the first time all season.

“I got to play for my mom and sister, specifically for me, but some other seniors as well,” Wickens said. “We got to play in front of the families, which is something we missed all year, so that was cool. It was definitely a little bit of extra motivation.”

Waves No Match for No. 2 Cougars in Championship

The BYU Cougars were a perfect 6-0 in MPSF championship matches in their home gym entering the 2021 tournament. Since the MPSF began in 1993, Pepperdine has won five conference titles, but the Cougars have seven.

Pepperdine was competitive in the first set, jumping out to a 4-1 lead and trading sideouts, but BYU exercised advantages at the net and service line. MPSF Player of the Year Gabi Garcia Fernandez, a junior opposite, smashed consecutive aces to give the Cougars a 19-17 lead, and BYU closed the set on a block by senior middle blocker Felipe De Brito Ferreira.

Hunt said that when Garcia Fernandez’s serve is coming at 78 miles per hour, passers have a fraction of a second to make a decision.

“He’s a world class server,” Hunt said. “He’s a good player. We tried to slow him down as best we could, but I don’t think anybody in the country is slowing him down.”

The second set was a disaster for the Waves, as BYU scored the first eight points and did not look back. The Cougars hit a ridiculous .933 in the set, and after two sets, BYU had nine blocks to Pepperdine’s zero.

The Cougars caught the Waves in medium and bad pass situations often, and it put the hitters in difficult positions against a stout BYU block.

“I’d much rather us get blocked than hit the ball out of bounds, and challenge the block,” Hunt said.

BYU graduate outside hitter Zach Eschenberg led all hitters with 13 kills, and the Cougars won the third set in front of their home crowd to earn an automatic bid to the NCAA Championships as a conference champion.

BYU won all five matchups against the Waves this season, with Pepperdine only taking 2 of 17 sets.

Wickens led the Waves with 10 kills, and Dyer said he was pleased with the team’s overall performance in the tournament despite the loss in the final.

“I think that we’ve outperformed anything that anybody would have thought was possible with three weeks off, so I’m really proud of our guys and how we responded,” Dyer said.

The NCAA Selection Committee decided the Waves had earned one of the two at-large bids to the national championships.

The Waves will travel to Ohio State University in Columbus, Ohio, where they will take on Big West Conference champion UC Santa Barbara on May 4, in the national quarterfinals. Pepperdine has won five national championships in men’s volleyball, most recently in 2005.

Other than the five losses to No. 2 BYU this season, the Waves have been consistent against exclusively MPSF competition. The matchup with the Gauchos will be their first non-conference match all season. The winner will take on No. 1 Hawaiʻi in the national semifinals.

Dyer, a fifth-year senior who returned to Pepperdine following the cancellation of the remainder of the 2020 season, said he relishes the opportunity to return to nationals.

“I was really glad to get back in here and get some closure with the guys and really get to finish out a season,” Dyer said. “It was weird when it was cut off just short, when we thought we were going to do some things in playoffs. It’s been a great year.”