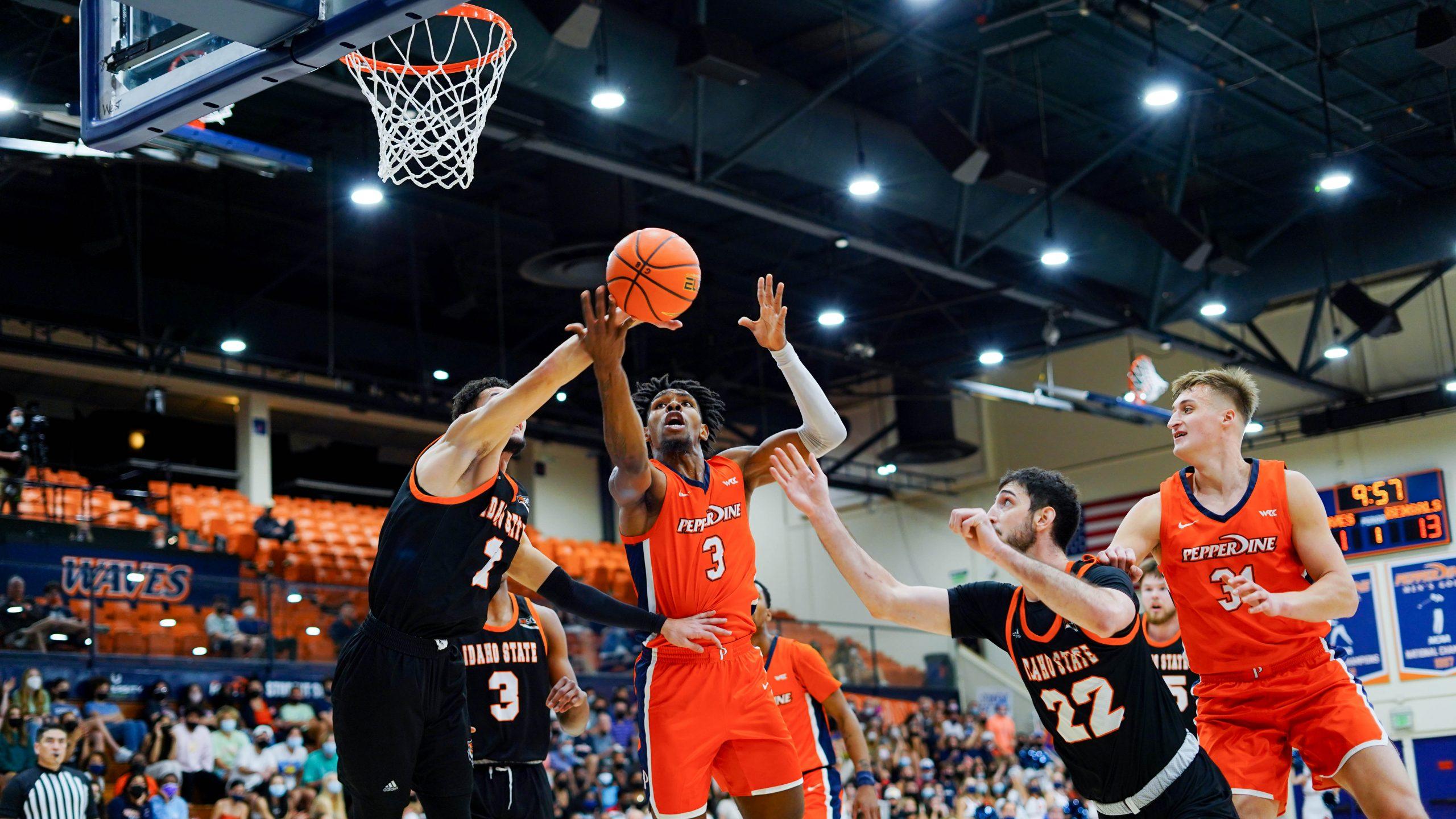 Graduate forward Keith Fisher III fights for the rebound versus Idaho State. Fisher is one of the eight new players on the roster. Photos by Dane Bruhahn

After losing their regular season opener to Rice University on Nov. 8, Pepperdine looked to bounce back and start their three-game home stand strong. Idaho State has been a frequent visitor to Firestone Fieldhouse, coming to Malibu for the third time in four years. The Waves won their previous matchup against the Bengals in 2019.

“It’s early in the year, but this was a must-win,” Head Coach Lorenzo Romar said. “We didn’t play well at all in our exhibition game against Point Loma, and we came out and weren’t very good in the second half against Rice, so we had to experience some success.”

The Waves came out with a defensive intensity that lacked in the game against Rice.

In the first play of the game, redshirt senior Jade’ Smith anticipated an early play, grabbed a steal and pushed it forward to graduate forward Keith Fisher III, who converted on the fast break layup to put the Waves up 2-0.

On the next possession, junior forward Jan Zidek snatched another steal, and the Waves got another transition basket by Smith, increasing their lead to 4-0. The Waves scored the first six points of the game, and the defensive effort sparked an early 15-3 run.

“We wanted to execute defensively,” Smith said. “We knew what they were going to run. We were just playing our defensive principals and executing what we were scouting.”

During the run, the Waves drew charges and grabbed steals that would set the tone of the game. One of those defensive plays came from freshman guard Mike Mitchell Jr. Idaho State junior guard Robert Ford III caught Mitchell ball-watching but he recovered and blocked a layup attempt from behind.

The early lead provided the Waves with enough offensive separation in the first half, as they never trailed.

While Pepperdine struggled from three by going 2 for 10 in the first half, they adjusted their offensive playbook with a variety of layups, midrange shots and easy transition buckets. With the increased defensive pressure, the Waves forced the Bengals into 19 turnovers, which turned into 11 fast break points.

“We’re a young team,” Smith said. “We need to work on playing at a consistent rate, being able to produce and being able to maintain our composure and all of that.”

Last season, the Waves ran most of their offense through then-senior guard Colbey Ross and then-junior forward Kessler Edwards. With Edwards now playing for the Brooklyn Nets and Ross overseas, Romar searches for other options on the offensive end.

“Right now, it seems like Jade’ Smith and Jan Zidek could be two of our better scorers,” Romar said. “They’ve been doing a good job.”

The Waves controlled the pace of the first half and went into the locker rooms with a 33-27 lead. The Waves shot an efficient 12 for 28 from the field in the first half. Smith led the way with 12 points and Zidek and Fisher contributed with 6 points, respectively.

After trailing in the first, the Bengals quickly responded. Senior forward Malik Porter converted on a layup and Ford nailed a 3-pointer from the left corner, making the score 33-32 in favor of the Waves.

The Bengals got their offense going, and eventually a 3-point play by senior guard Tarik Cool gave the Bengals their first lead of the game with the score at 40-39 with 15:36 remaining in the second half.

Later, Zidek would convert on a layup after a long rebound from a missed 3-pointer triggered a transition opportunity. The Waves led 51-44 with eight minutes remaining.

“Coming into the second half, that’s what we’ve been struggling with,” Mallette said. “It was very important that we come out, play hard, play together, and when adversity strikes, we come together as a team as opposed to playing as individuals.”

The Waves regained control of the game from that point. There were only four lead changes, all coming in the second half, as the Bengals tried desperately to get back into the game.

Fisher made a midrange floater to increase the lead to 58-49. Munson grabbed another steal, which triggered a fast break and Fisher nearly threw down a dunk but freshman center Zach Visentin fouled Fisher. Fisher went one out of two from the free-throw line, which increased the Waves’ lead to 10.

Munson contributed to the defensive effort with three steals and grabbed six rebounds. Smith led the Waves offensively with 17 points. Four of the five starters for the Waves provided double-digit scoring efforts and Fisher snagged 10 rebounds.

With the team consisting of mostly freshmen, Romar opted to start both Mallette and Mitchell in the backcourt, with freshman center Carson Bashman coming off the bench to provide depth in the center position.

“These guys are very coachable, it’s a lot of fun to coach them,” Romar said. “This is a very important time of the year because these guys are cutting their teeth in college basketball. Each game they’re going to learn something and take it to the next game.”

“We just gotta come in here with the right attitude, get these three at home, we’re on the road a lot, traveling a lot, games come quick,” Mallette said.