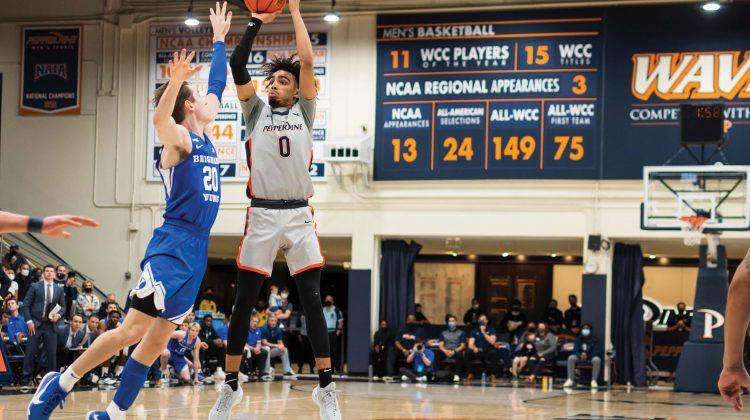 Freshman guard Houston Mallette attempts a jump shot versus BYU on Feb. 12. Mallette scored a career-high 31 points and was perfect from the floor for a majority of the game. Photos by Lucian Himes

Pepperdine Men’s Basketball (7-20) rallied late in the second half but fell short in a heartbreaking loss to Brigham Young University (19-8) with a score of 91-85.

It was a battle of the point guards as both Pepperdine’s freshman guard Houston Mallette and BYU’s senior guard Alex Barcello had career-nights. Mallette finished the game with 31 points on nine-for-11 shooting and was five-for-six from three. Barcello had 33 points and went nine-for-10 from three.

“This has probably been the biggest learning experience I had in my life,” Mallette said. “You learn so much this year, how important the details are. Success is in the details, and this year, I really found that to achieve something you never achieved, you have to do something you’ve never done.”

The Waves opened the game with energy. On the opening possession, junior forward Jan Zidek scored on a post-up play. Then, after a bad miss from the Cougars, freshman guard Mike Mitchell Jr. scored a 3-pointer in transition. Freshman forward Maxwell Lewis contributed with a one dribble pull-up on the baseline, extending the lead to 7-2 early in the first half.

After Barcello knocked down his second 3-pointer of the game, Mallette answered with a 3-pointer of his own, extending the Waves early 14-8 lead in the first half with 16:14 remaining.

Freshman center Carson Basham made his presence felt with two straight baskets. After the Cougars sent a double-team to Zidek, who found the open Basham under the basket.

Back-to-back threes from Barcello trimmed the Waves lead to 18-17, but the Waves went on a 10-2 run, which was capped off with a long-range 3-pointer from Mallette, extending the Waves lead to 27-19 with 9:34 remaining in the first half.

“We’re building a culture here,” Mallette said. “And tonight, although on the scoreboard it didn’t look the best, we didn’t win the game, in the locker room we won with each other with the effort we competed [with]. It’s just about bringing it to every night.”

The Cougars answered with a run of their own. Barcello’s floater gave the Cougars their first lead of the game at 29-27.

The back-and-forth battle continued as Mallette answered with a fadeaway mid-range, giving the Waves the lead back with the score at 33-31, favoring the Cougars.

After senior guard Darryl Polk Jr. received a foul, Head Coach Lorenzo Romar threw up his hands in frustration. This reaction from Romar got the referee’s attention, and Romar picked up a technical foul.

“He couldn’t hear a word I was saying,” Romar said. “I was a little too far out of the court.”

With the second half coming to a close and the Waves looking to climb back into the game, Mitchell Jr. nailed a 3-pointer after crossing over his defender to gain separation with the score 42-38.

The Cougars ended the half with back-to-back 3-pointers and headed into the locker rooms with the score at 48-38. At the end of the first half, BYU shot 16-for-25 from the field and shot nine-for-15 from 3-point range, with Barcello leading the way with six threes of his own.

Mallette scored the next nine points for the Waves, trying to keep them in the game. With the Waves starting four freshmen, the experience gained from this season would provide a blueprint into how the team develops in the future, Romar said.

“Invaluable experience,” Romar said. “The experience that they’re getting is something that you can’t teach. You gotta go through it. It’s unfortunate that we haven’t been able to win games, but they’re getting better every time and every week we can see them improve.”

The Waves went on an 8-0 run to trim the Cougars lead to five after sophomore forward Kendall Munson threw down a transition dunk, forcing the Cougars to call a timeout, with the score at 66-61 with 12:29 remaining in the second half.

The Waves continued to claw into the game after outscoring the Cougars 10-9 for the next seven minutes of play. After Mitchell Jr. pushed the ball in transition, Polk Jr. scored on a layup and converted on the 3-point play, closing in on the Cougars’ lead— now 75-72 with 5:21 in the second half.

But, the Cougars managed to pull away and the Waves never gained a closer lead in the closing minutes of the second half.

The Cougars had four players who hit double-digit scoring marks while the Waves only had three.

“We’re a really young squad,” Mallette said. “We started four freshmen tonight, with all the injuries, guys no longer with us, just keep getting better. Tonight was a night we competed. Now is the time to get better.”