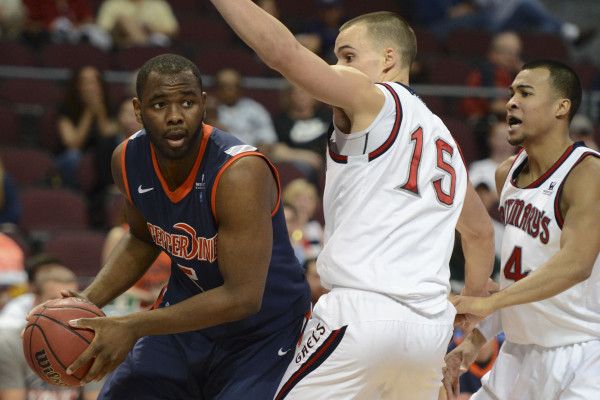 Men’s basketball faced off against Saint Mary’s in the quarterfinal round of the WCC Championship Tournament at the Orleans Arena in Las Vegas on March 9, coming to within 7 points of the lead with 8:30 left to play but ultimately losing to the Gaels 80-69.

The No. 5 seeded Waves secured a first round bye in the tournament, but the extra rest and practice time wasn’t enough to stop the strong shooting of the No. 4 seeded Gaels.

Pepperdine took an early lead in the matchup, but Saint Mary’s fought back and was able to secure a 41-28 lead at the half due in large part to strong shooting from beyond the arc. Saint Mary’s made 5 of their final 6 three-point attempts in the half, as well as scoring on 8 of their last 10 shot attempts to leave the Waves trailing going into the second.

The Waves would trail for the remainder of the game, with the Gaels leading by as much as 16 points. Pepperdine was able to decrease the lead to single digits due in large part to consecutive three pointers by sophomore forward Stacy Davis, followed closely by free throws and another three pointer from senior forward Malte Kramer, bringing the Waves to within 7 with 8:39 left to play. The Waves were unable to chip away any further however, and the Gaels would hold on to the lead and secure the victory to advance to the semifinals.

Senior forward Brendan Lane led the team with 4 assists and 2 blocks, but fouled out of the game. Lane will be one of the seniors who will be leaving the team this season along with Kramer and guard Nikolas Skouen. Head Coach Marty Wilson took to twitter to congratulate the seniors for their hard work and leadership.

Special thanks to our senior for the role models you are for our young guys. You allowed our program to grow. We will miss you! #1stClass

Pepperdine will end their season with a 15-16 overall record, with Davis earning All-West Coast Conference first team honors, freshman guard Jeremy Major being named to the WCC All-Freshman team and Lane earning the WCC Defensive Player of the Year honors.