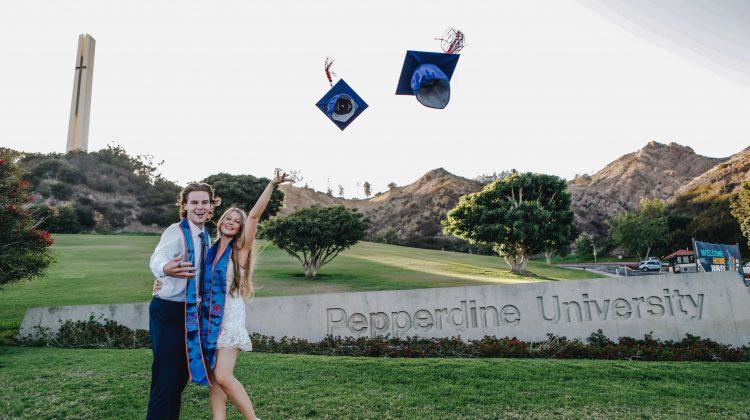 “Sorry tough guys, it’s another day in the life of a Stay-At-Home Husband” rings through the speakers of many phones.

Maya and Hunter Leppard (Seaver ’20) started posting videos about their life and relationship on TikTok in February 2021. Their videos that commented on gender roles in relationships went viral, and as of March 14, their account “Maya + Hunter” has almost 761,000 followers and 33.2 million likes.

“I feel like [posting TikToks has] made us be stronger because we know that no matter what, the other person’s gonna be there, there’s not a certain role we have to fall into,” Maya said. “We will just fall into the role that’s needed.”

Hunter said he is a member of Pepperdine’s Alpha Tau Omega fraternity while Maya is in Delta Gamma. Maya also worked for the Graphic as the advertising manager.

“We had our own friends, we had our own activities, but then we still were able to spend the time together and bond over sharing that with each other and the differences there were,” Hunter said.

After graduation, Maya and Hunter said they got engaged in July 2020 and married a year later.

Maya works for her family’s manufacturing business. She said the industry is very male-dominated, but her mom is the CEO of the company.

“She just does it really well and she’s always been an example to me of ‘Oh, I can do that. I can do anything,” Maya said.

Maya said she realized that this was not a universal experience once she got into the ‘real world,’ but the idea that women can and should be in power is very strong in her relationship with Hunter.

“He immediately was on board [with me working for my family business], encouraging me in whatever I wanted to do,” Maya said.

Maya said she works remotely while Hunter attends Chapman University’s Fowler School of Law. Once he graduates, Hunter agreed to move for Maya’s work, if necessary, because he can practice law anywhere and wants to support her.

Maya and Hunter said they agreed communication is the foundation of their relationship, allowing them to treat each other equally with love and respect. They said it seems like most people expect the woman in the relationship to be the conventionally loving and romantic partner, but their TikToks subvert this notion.

“Most guys do not treat their wives well, and I’m not going to say that wives are blameless, but a good marriage is unfortunately rare,” Hunter said.

One of their videos exemplified this situation, Hunter said. In the video, Hunter surprises Maya with coffee and a croissant to celebrate the beginning of her birth month.

“People were shocked, and we were like ‘That’s such a shame,'” Maya said. “It should be so normal for the guy to be just as nice to the girl as the girl usually is to the guy.”

Hunter drew a distinction between being a good partner and dealing with heavy topics in a relationship, which he said applies to how people react to their “Stay-At-Home Husband” series.

“There’s the big sacrificial things of deciding, where we’re gonna live, whose job is gonna take precedence in a specific moment,” Hunter said. “Those types of things should be very collaborative — they should be equal. But, then there’s these little things where it’s just being a decent partner and just being a good human being.”

People seem to get those two parts of a relationship conflated, Hunter said. Because of this, Maya and Hunter chose to make the Stay-At-Home Husband series, where Hunter voices over a day in his life while performing tasks that are frequently associated with women.

“We put the Home Depot sound on it, so that’s when we got this kind of idea of like, ‘Let’s figure out a way to make this serious and get the point across, but also a little tongue-in-cheek,'” Hunter said.

This reversal of societally-approved gender roles is normal in their relationship, Maya said, because Hunter does the cleaning in the relationship, and Maya works. This has caused the topic of a marriage as an equal partnership to become a theme on their TikTok account.

​​”It’s mostly me, but behind that is a couple that just really believes in an equal partnership in marriage and communication and treating each other with dignity,” Hunter said.

Those around Maya and Hunter said they see the strength of their marriage. Milan Loiacono (Seaver ’20) wrote in an email to the Graphic that their relationship is epitomized in the idea of small, meaningful moments between best friends. Loiacono, who was Maya’s roommate, worked for the Graphic as the photo editor.

“Hunter and Maya have the easiness, comfort and practiced teamwork of an old married couple, with all the goofiness and tenderness of two kids in love,” Loiacono wrote.

With their TikToks, Maya said their message is to normalize an equal partnership with communication and respect which is relevant when considering the fight for gender equality.

“We should all be equal,” Maya said. “It seems like it should be common knowledge, but then when we posted something like [the series], it proved like, ‘Oh, we are very much not there.'”

Maya said there is always more to be done in the fight for gender equality. Hunter agreed, adding that their videos are viral because they’re “abnormal.”

“We want this to be something that’s not viral on TikTok,” Hunter said.