Malibu Music Awards rocked the stage at the Malibu Inn 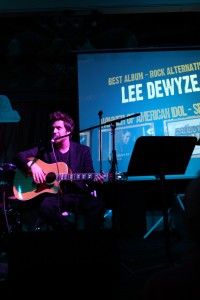 Rocking Out — American Idol winner Lee DeWyze performs for a jam-packed Malibu Inn. He was among many performers at the Music Awards.

This past Saturday at the Malibu Inn, the Fifth Annual Malibu Music Awards and Festival culmination took place. It celebrated the events and accomplishments of the musical community, and it benefited the Malibu Symphony Association 501c3, children’s music programs and community music efforts. A portion of the proceeds was donated to the Simms Mann Center for Integrative Oncology in recognition of the upcoming October’s Breast Cancer Awareness Month. In an effort to raise money, they held an auction featuring items such as a guitar signed by Tom Petty.

Comedian Scott Conner hosted the ceremony and presented awards to prestigious artists in music of the past year. On Saturday, they gave out awards and had a major featured act, Glen Campbell, who received the Lifetime Achievement Award. Some of the other awards of the night were the Urban Hip-Hop Award to Deezo, the Coffee House Award to Kari Kimmel, the Best Album Award and Rock Aternative Award to Season 9 American Idol winner Lee Dewyze, and the Grand Prize Award to Mike Burke. Pepperdine’s own, Ryan Board, director of choral activities, received Music Educator of the Year.

Throughout the week leading up to the awards, the festival featured acts such as the Jazzmasters, Samantha Ronson, NBC’s “The Sing Off” Season 3 a cappella champions Pentatonix and 27 Miles. These acts performed at restaurants in a 27-mile stretch across Malibu, including Spruzzo’s and Paradise Cove.

Despite Glen Campbell being the announced big name performer of the night, the Malibu Music Festival planned on having Britney Spears also perform. However, she decided to mooch off the free food and perks that you get as a VIP but bailed before performing a single set. Along with these big names, all the Miss Malibu contestants were there and various acts such as Victorian Ghost, which is composed of Glen Campbell’s kids.

Another element of the festival was the original songwriting competition. Sonic Bids sponsors it, and the winner received a trophy, one year membership to Sonic Bids, a cash prize, a three song recording package with placement on iTunes, management consulting and merchandise. The song competition deadline was set earlier than the festival’s start.

This encouraged lesser-known musical artists to get involved from a range of different genres.

The Malibu Music festival and the award show that concluded the week were sensational and gave both artists and locals a taste of the musical talent present in the community.  It brought wider recognition to the talent present in this small city as major acts and names were present for a festival where many lesser-known artists performed and were honored.

The event and after party ran late into the night as guest truly invested in the music and spirit of the festival and celebrated the outcome of a long and event-filled week.

Updated: Oct. 1,  4:07 p.m.: "We previously notified the community about an incident on September 17, 2012 regarding a suspicious...
Copyright 2013 Jupiter Premium Magazine Theme
Back to top