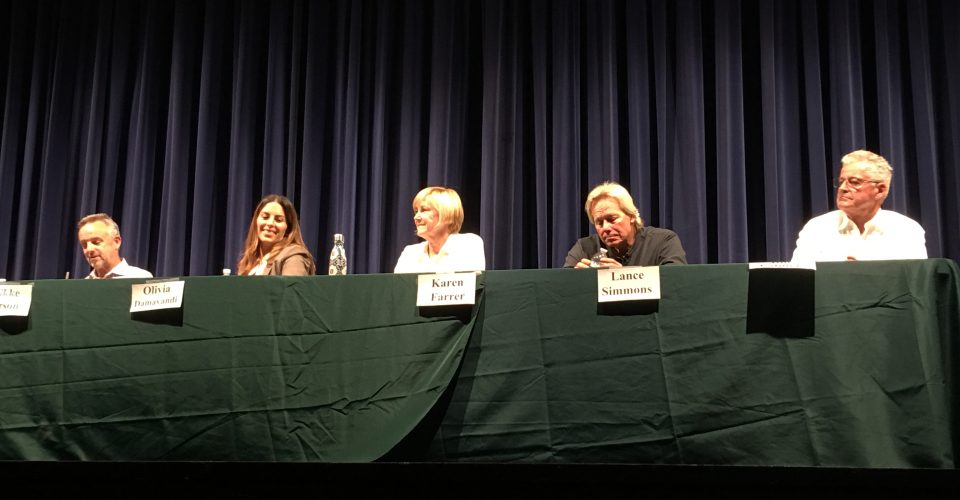 “We wanted students and families to get involved,” Aldrich said. “We’re in a large transition stage in Malibu with a lot of changes coming. These changes involve the younger population and what’s going to happen in our future.”

Malibu residents will be voting in three weeks, on Nov. 6, to fill the seats of council members Lauren Rosenthal and Lou La Monte as they are termed out of office this fall.

The five candidates running for office shared their diverse backgrounds at the forum.

Mikke Pierson served on the City of Malibu’s Planning Commission and is currently a small business coach. Olivia Damavandi was a former editor and writer with The Malibu Times and served as the City of Malibu’s media information officer. Karen Farrer was a parent on the Malibu High School Board and local activist. Lance Simmens has 40 years of political work serving under former presidents Jimmy Carter and Bill Clinton and served on the Adamson House Board. Jim Palmer served on the city’s public works commission and owns a local vineyard.

All five candidates spoke highly of the student-run event.

“All the youngsters that were here tonight had good questions,” Simmens said after the forum. “They were involved; they were courteous. They’re the fate of the nation. It’s a great testament to the youth and their ability to grab the bull by the horns and run with it.” 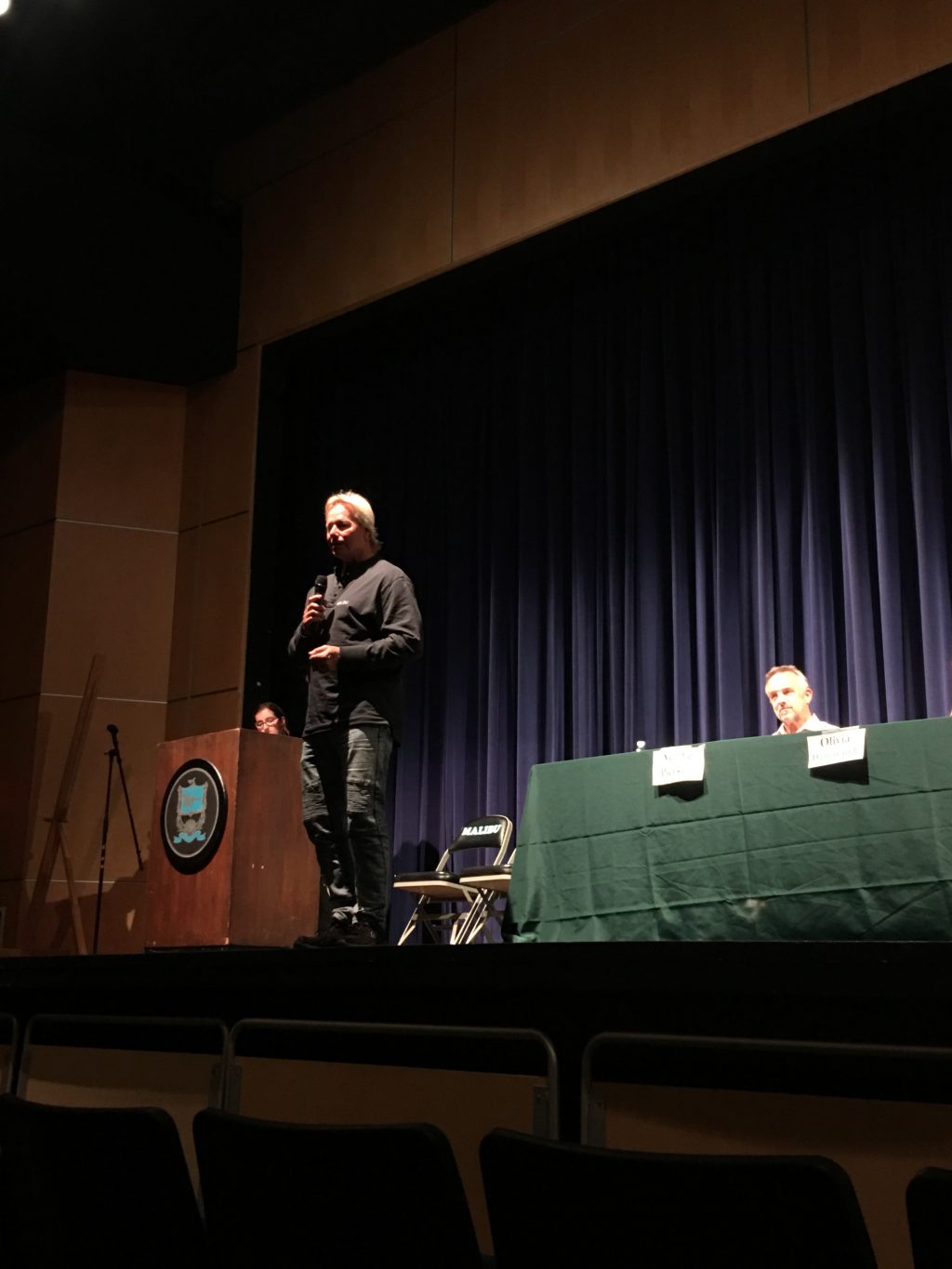 Farrer agreed that the students were professional and engaged during the event.

“I’m really happy and really proud of the Malibu High students for putting this event together,” Farrer said. “It was the first time they’ve ever had a candidates forum. I would like to see this become an event with every campaign season.”

Palmer commended Alrich on her “amazing job as a moderator.”

Damavandi said this event was special to her because she was once a student at Malibu High and now she is a parent raising her own kids there.

Pierson agreed that having the youth run the event was exciting.

“I think this was the forum that excited me the most,” Pierson said. “My whole life has revolved around kids — mentoring them, growing them, [and] helping them make the right decisions has been a huge part of my life.” 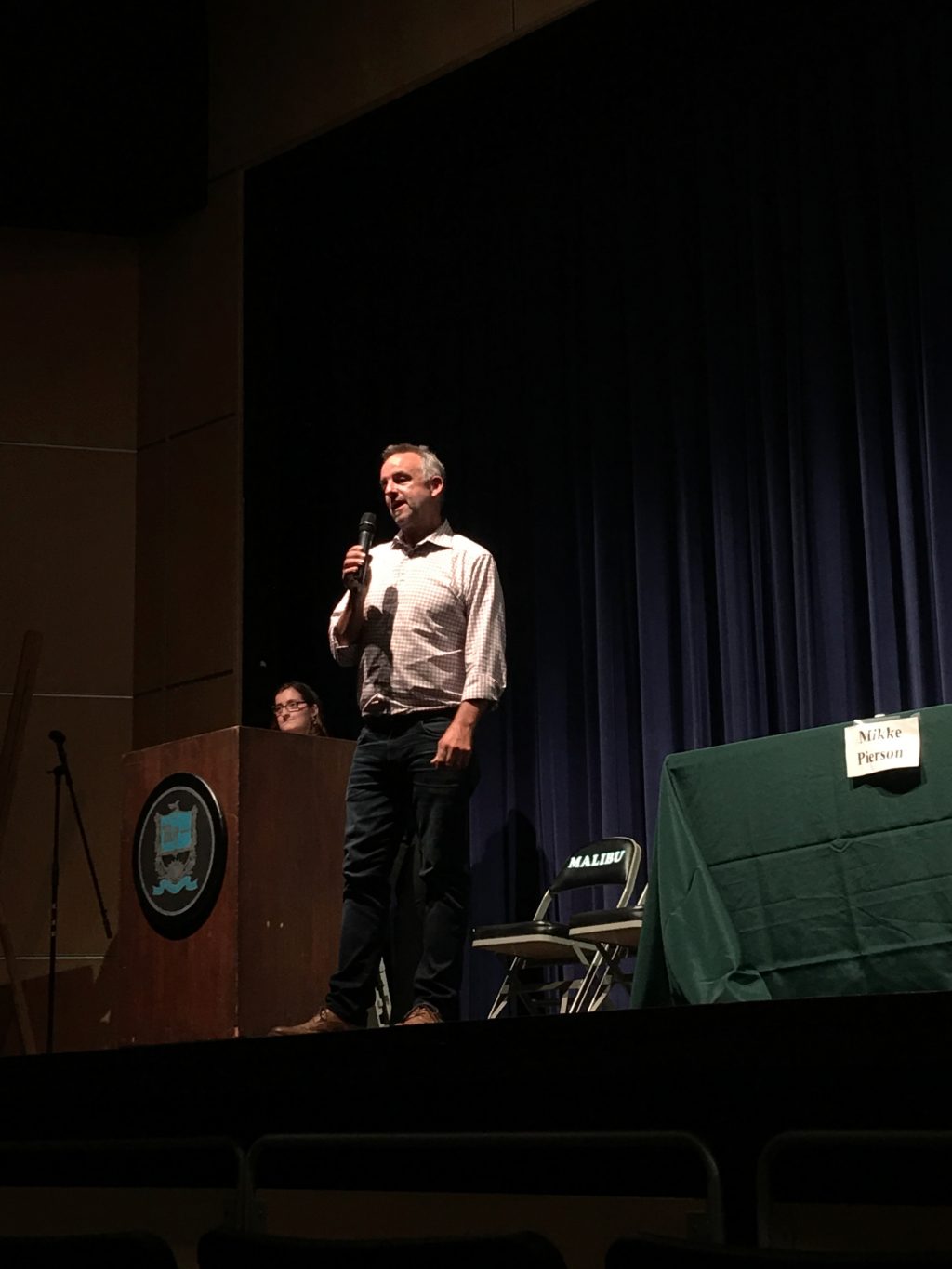 Aldrich and Ford asked the candidates questions concerning prominent topics in Malibu such as homelessness, Measure M and young people in politics. The candidates had two minutes to answer each question with 30 seconds at the end to revisit any question. The hosts then invited members of the audience to ask the candidates their own questions.

Aldrich questioned the candidates on their stance on homelessness in Malibu and the measures they would take to resolve it.

Each candidate had different approaches to the issue. Pierson discussed the City of Malibu’s outreach team, which he said housed 40 people in Malibu into traditional housing. Palmer also touched on the outreach program, but said Malibu must start with policies.

“The first thing we need to do is have some definitive policies that we can follow,” Palmer said. “The biggest concern is public safety and we need policies that can ensure that.” 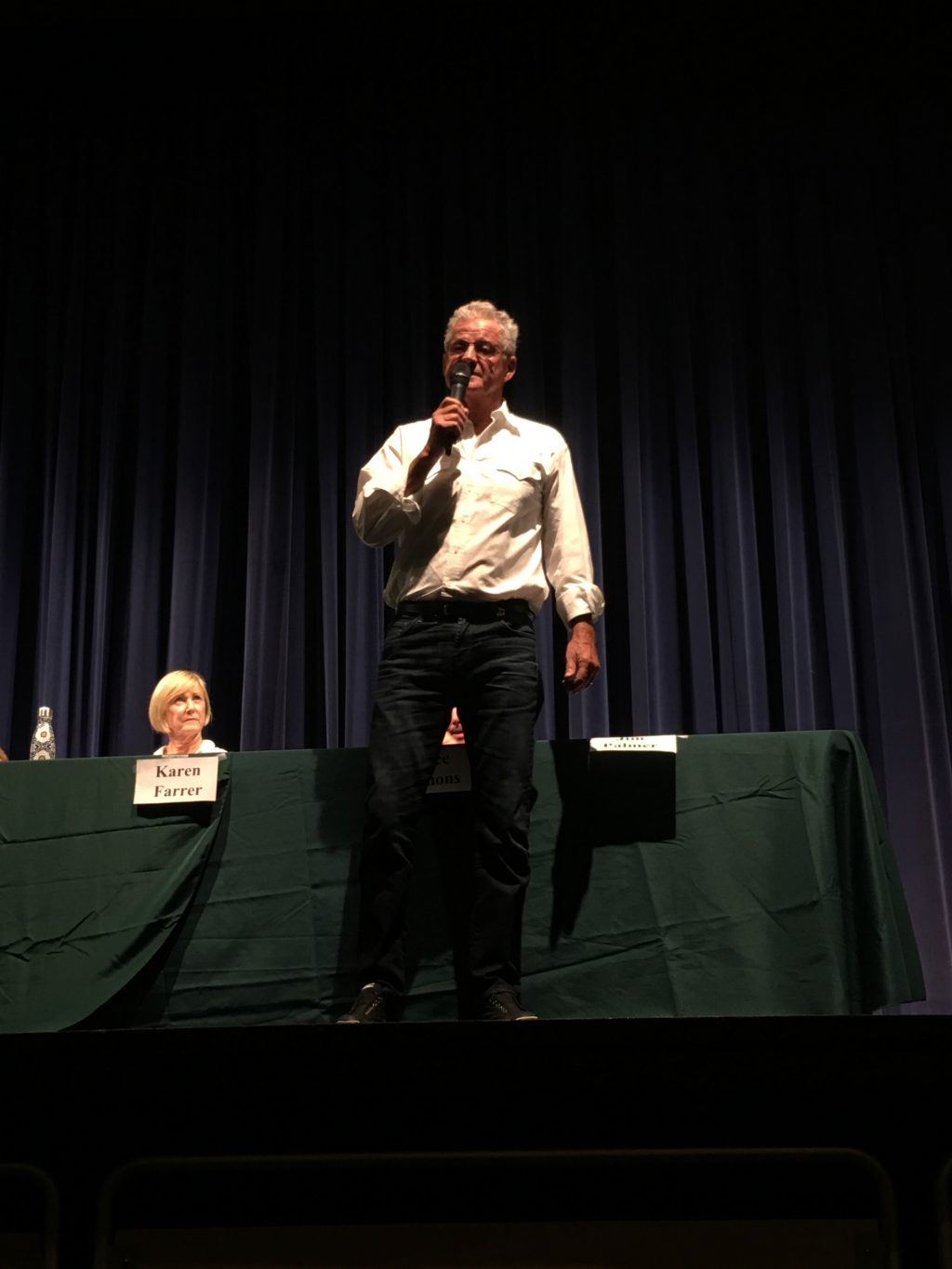 Damavandi said these programs are wonderful, but she would dissect these initiatives and see how much they actually help.

“These programs are attention and funding that are pulled away from other parts of the community,” Damavandi said. “If they aren’t working, we need to change the process and work more with the county … I am not saying if this programming works or if it doesn’t, but I want to find out more about it.” 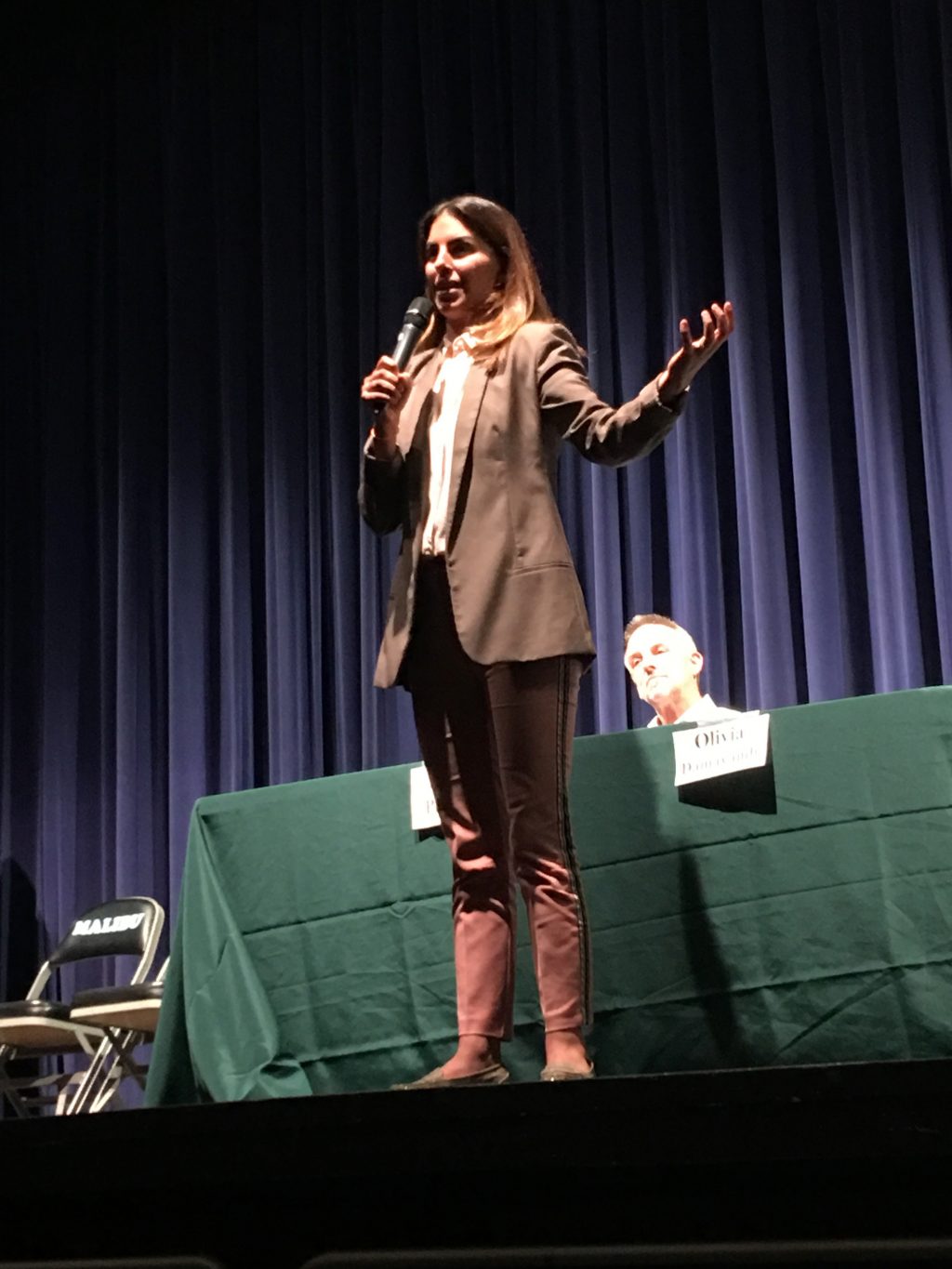 Farrer said her approach to the issue is compassion first. She spoke of a need for services for the homeless, such as job opportunities and helping those who can be reconnected with family.

“We have the moral obligation to give these people all the assistance we can give to help get them on their feet,” Simmens said. “To reduce this population, we can teach them the skills that are necessary in order to complete a job: how to dress for an interview, how to prepare for an interview.”

Measure M is a current mandate on the ballot that would provide two separate school facilities improvement bonds for Santa Monica and Malibu, according to an article in The Malibu Times.

All five candidates said they were in great support of Measure M. Farrer, who is on the Measure M Committee, said this is extremely important in building up the local school system.

“Previously, Malibu gave Santa Monica Schools $91 million,” Farrer said. “We have been hemorrhaging money to give to Santa Monica Schools. Please, if you’re not sure, do some homework and find out as much as you can about Measure M. Our money stays in Malibu.” 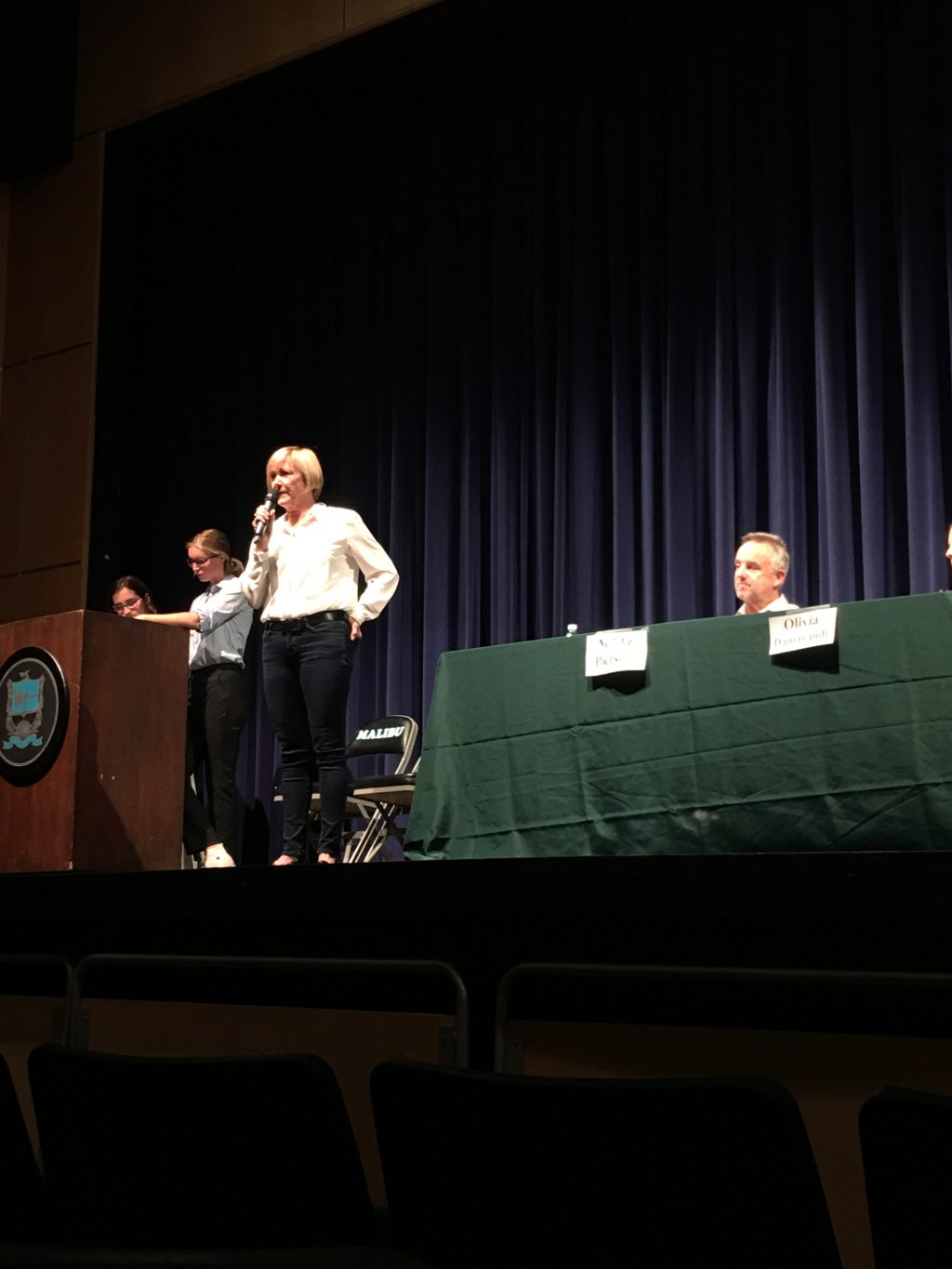 Damavandi said she wished there was a Measure M when she was a student at Malibu High, especially regarding the lack of funding for recreational venues for students. Simmens also touched on giving the youth long-awaited recreational spaces such as a baseball field or skate park.

Palmer also encouraged the crowd to vote for Measure M and get a start on an improved school system. Pierson said that even for those who are not involved in the school system, Measure M would help the entire community.

“It raises your property values,” Pierson said. “It’s an absolute no-brainer … This district deserves its own control. Schools need to be able to hire their own people and pursue the projects we want to do. It supports our kids, and it supports our community.”

The final topic of the night dealt with the big question, “Why should young people vote?”

All candidates shared one underlying message: To vote is to use one’s voice on the issues and projects they care about. Students must stand up for their future or else they will lose the opportunity to make a change.

Malibu High sophomore Frankie Cloete, who is not yet old enough to vote this Nov. 6, attended the forum. She said it is crucial for students of all ages to be informed.

“This forum was really important,” Cloete said. “Especially in this time that we are politically in the U.S. It’s important for us to get involved — young people are the future of our country.”

The Waves earn a victory against Cougars 2-1 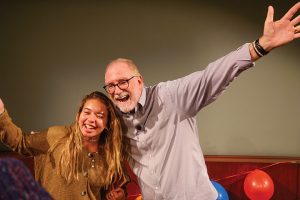 Photos courtesy of Kaelin MendezFrom helping build schools for girls in Afghanistan to arranging a parade for his neighborhood...
Copyright 2013 Jupiter Premium Magazine Theme
Back to top