The Men’s Volleyball team hoots and hollers after finishing the fifth set with a kill by Alex Gettinger against CUI on Wednesday.

The nationally-ranked No. 7 Men’s Volleyball team put down a five-set nail-biter victory over the Concordia University Irvine Eagles to celebrate 50 years of the program.

“I think our guys are constantly reminded that a lot of people have put in hard work before them for them so that they can … contribute to that legacy,” Head Coach David Hunt said.

The beginning of the match looked promising for the Waves.

Since the match’s first serve, the Waves led the Eagles for the majority of the set, but the margin didn’t expand more than three points.

Unfortunately, the Waves were unable to hold on and gave up two crucial points at the end of the set, falling 22–25.

“We really were just trying to focus on each other and not worry so much about the environment or what the other team was doing,” outside senior Noah Dyer said, who had the team-high of 18 kills. “We just like to stay together as a team and really pull off of each other’s energy.” 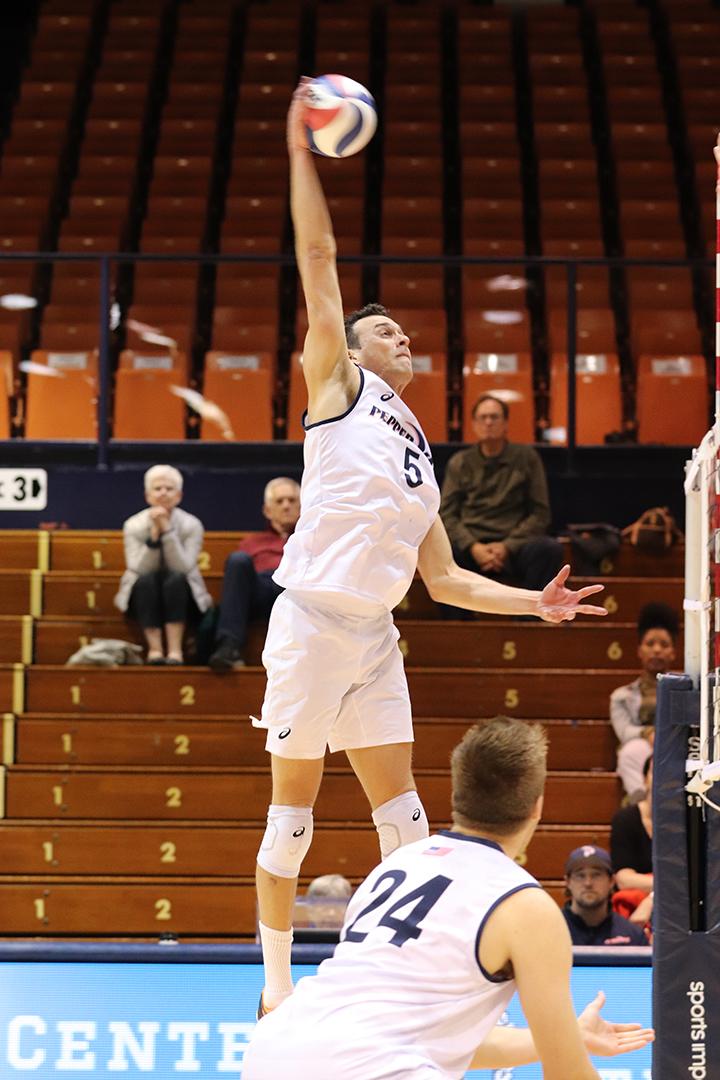 The Waves’ point-less streak continued into the second set, with the Eagles going up 0–2. Again, the Waves managed to take back the less-than-three-point advantage until the Eagles tied the set at 14.

“[It was] just a battle,” junior outside Alex Gettinger said. “I get to a point where I don’t even think — I just kind of play, and that’s all we had to do.”

No team could escape the other; both teams would gain an edge just to have it chopped off the next point. This pattern continued past the regulation of 25 points until it hit 29–all. CUI managed to pull off a final set win with two successive kills, 29–31.

The Waves had the most kills of the match in this set with 22. The team usually averages 11.96 kills per set.

The team wiped their slate clean and got to work during the third set. With redshirt freshman opposite Jacob Steele’s serves, Gettinger fired down two of his 16 kills to bring the Waves to an early 4–1 lead.

Predictably, the Waves allowed the Eagles to catch back up to tie at 11–all. Two blocks from redshirt freshman middle JT Ardell and freshman setter Joe Karlous established a turning point in the set and the rest of the match. 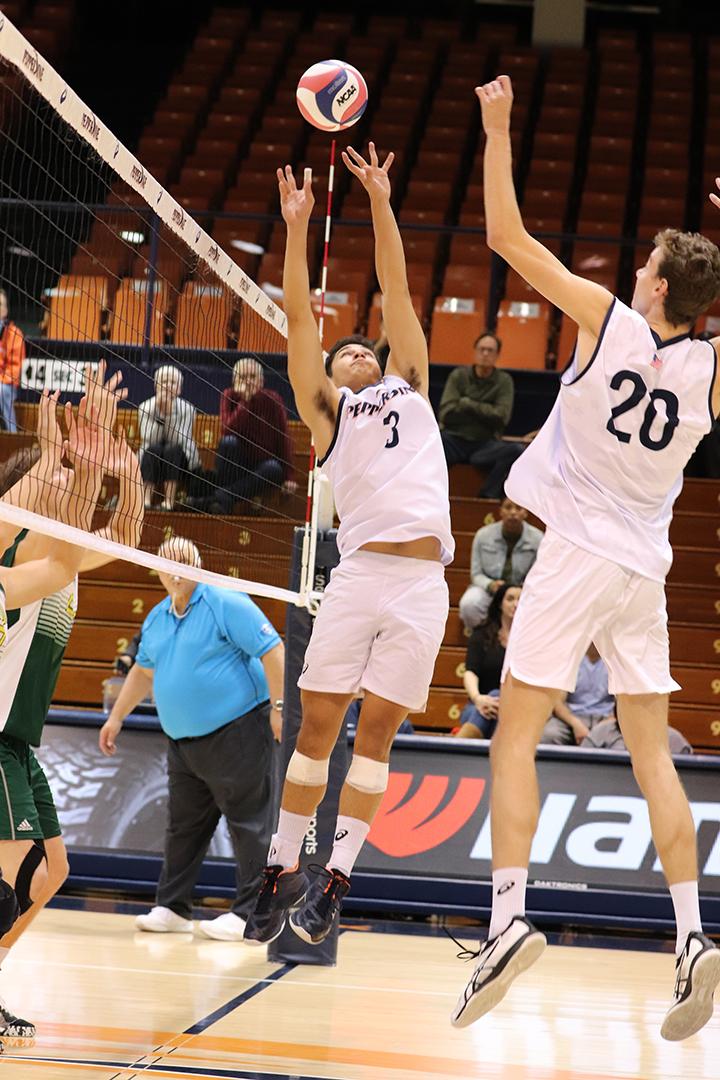 “After winning that set, I think we … saw that we really can play some good ball,” Dyer said. “[We were] like, man, let’s just go out there and win it because why not.”

The Waves finished off the fourth set a little quicker and brought their point advantage to five to make the score 19–14. To tie the match, redshirt junior middle Austin Wilmot and Dyer finished at the net while CUI missed a serve to complete the set 25–20. 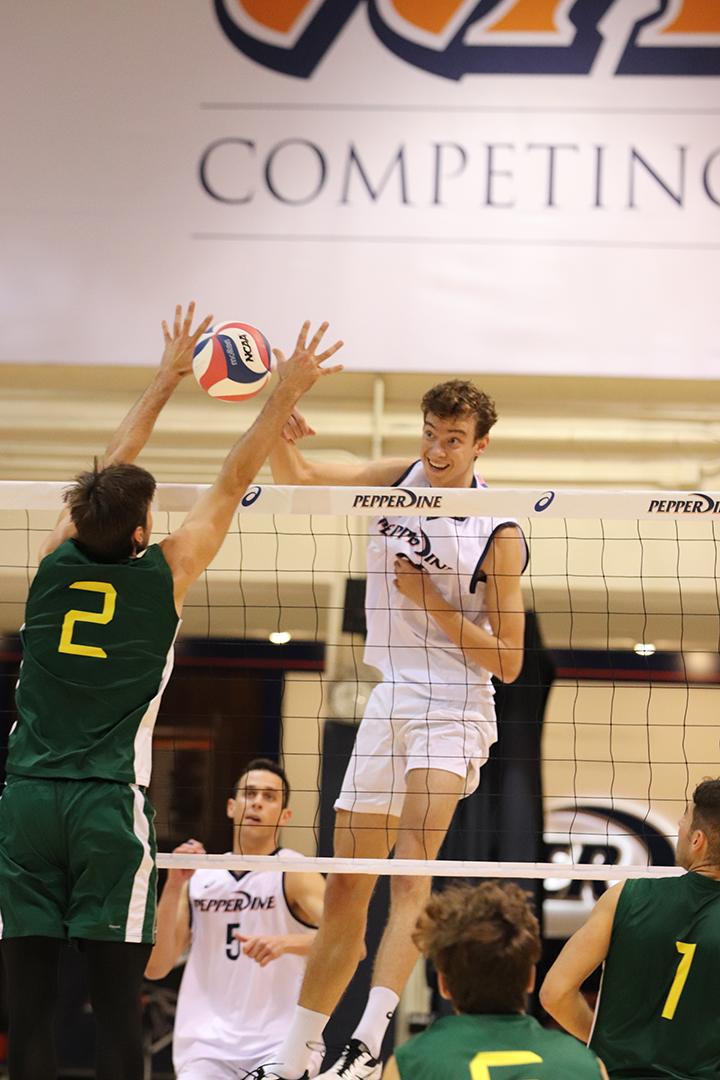 “I thought, after the third set and fourth set, we really had the momentum,” Wilmot said. “I think we just took control in this set, and even though it’s close, I feel like we were in control for the majority of [it].”

Now that the fifth set was fair play, the Waves wasted no time in establishing themselves as leaders on the court. With nine kills, two of which were from Dyer and Gettinger for the final points, Pepperdine brought the evening to a close to send CUI home with a loss of 15–13.

“I think everyone has to work together as a team, as a unit,” Wilmot said. “Tonight, I feel like we did a really good job at talking and communicating and playing together.”

Although the Waves have one victory this week, another is still up in the air when they face the University of Southern California Trojans on Friday, Feb. 14 in Firestone Fieldhouse.