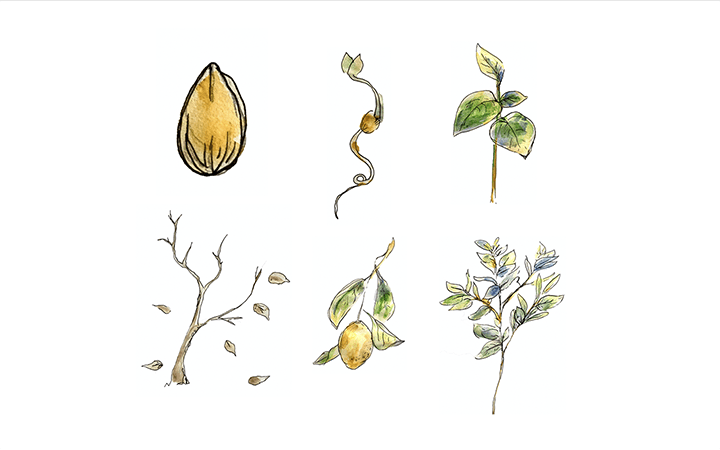 That’s the counterintuitive take-away Sociology Professor Charles Hall leaves students with in his upper-division sociology course on death and dying.

Death isn’t the cheeriest subject, but Hall didn’t mince his words and isn’t one to shy away from difficult conversations. Hall’s class strives to break down barriers and further a deeper understanding about life and death, a traditionally taboo subject.

“It’s not a subject that we Americans like to talk about that much,” Hall said. “And yet I feel like it is probably one of the most important things that we should talk about because that is something we’re all going to face — I call it the great equalizer.”

In the Pepperdine community, discussing life and death isn’t just answering, “What happens next?” — it goes deeper into conversations about community, faith, grief, hope and identity. Life after death defined literally and spiritually still doesn’t provide many answers, but for the faculty and students interviewed, it means finding a new perspective on living.

While Hall talks about death as the route to better understand life, cultures have portrayed life and death as polar opposites for decades.

In Christianity, life and death are two separate events. In other religions like Buddhism, death is just the next stage. Unlike Eastern societies, Western society thinks of time linearly instead of cyclically, Hall said, which results in the idea of an after-life instead of reincarnation.

Throughout the U.S., most people believe in heaven and that God has created an afterlife but there is a declining trend in people believing in hell, Hall said.

In the Christian tradition, most theologians believe in a future resurrection with the second-coming of Christ, resulting in life after death, Chaplain Sara Barton said,.

“But in the meantime, because we’re not yet living in that time that is envisioned, there are all kinds of ideas about what it will be like to experience that resurrection ourselves,” Barton said. “Like, ‘What happens after we die?’ Do we go to sleep, do we go to purgatory, do we experience the rapture like some novels have portrayed? And I don’t think anybody knows for sure.”

Even those with near-death experiences cannot predict what happens after death. Junior Austin Berg came close to death in December 2015 after a ski accident in Flagstaff, Arizona, while on a school trip. Berg hit a tree and got sucked into a snowblower, causing him to be concussed and break both of his arms.

“Technically, I was declared dead one time, which obviously was a misdiagnosis because I’m not dead,” Berg said. “I don’t remember anything that happened because the first memory I have from it was waking up in a body bag and some dude trying to find my wallet so he could ID me.”

Berg didn’t experience any kind of blinding light or other post-death experiences, which are dramatized in stories like his. Such experience are not uncommon, Hall said.

“When stories are told about near-death experiences, the stories are pretty consistent,” Hall said. “A tunnel, a light at the end of the tunnel, seeing someone who had already passed, being able to have a conversation, not wanting to return to the Earth.”

Research on near-death experiences, also called NDEs, still remains inconclusive and while neuropsychological experiences can explain much of these occurrences, science can’t explain all memories of NDEs, Hall said.

“Science dominates in our culture, so there’s a lot of people who will say, ‘It’s all occurring inside the brain, inside the neurons, and this is not something that is happening truly outside,'” Hall said. “The data is mixed — the data is not clear and we’re unsure about that.”

Senior Connor Anthony found his own answers for what happens after death in research. Anthony grew up Roman Catholic, which defined much of his early perceptions about life after death. But after reading Dr. Rick Strassman’s research on DMT — a hallucinogenic tryptamine drug associated with psychedelics — Anthony came to a new conclusion about life after death.

“Basically, DMT isn’t just a weird drug that weird kids buy on the street,” Anthony said. “It’s a chemical that your body naturally releases in your brain and it releases in two different events — when you’re dreaming and when you’re about to die, your body floods your brain with DMT. There’s been hypotheses by [Strassman], especially that when you’re about to die, your body sends your mind into a dream state, it’s supposed to be some sort of self-conservation thing.”

Based on this research, Anthony said his perception of life after death is not some kind of afterlife, but rather a dream-state without a sense of time or waking up.

Dying in the personal sense

But understanding death doesn’t end with comprehending what happens after death. For Berg, coming close to death changed his day-to-day perceptions.

“I think it shrunk the world for me into just people,” Berg said. “That’s what I took away from it — I should connect with people.”

Hall referenced a sociology study that asked 95-year-old people one question: ‘If you could do life all over again, what would you do differently?’ The two most common answers from respondents: They wished they reflected more and wished the things they did had a lasting impact or legacy.

“I think we need to think about it and reflect on it more than we do, and in the process of doing that we realize a lot of the stressors we have today are irrelevant and small,” Hall said. “You really have to say, ‘How am I going to live this one life?'”

In Christianity, each Christian undergoes a death unto oneself in becoming a follower of Jesus. Dying to oneself, in the Christian tradition, means shedding the sinful human nature and taking on one that looks more like Jesus and owning those consequences, Barton said.

Barton pointed to a passage Paul wrote in the New Testament, 2 Corinthians 5:17, about this new kind of life: “Therefore, if anyone is in Christ, the new creation has come: The old has gone, the new is here!”

“It is God who inaugurated the new creation through Jesus and Jesus followers believe that — through following Jesus — they become new creations,” Barton said. “So they stop living for themselves, you can say they die to themselves, and they start to live for other people.”

A Christian himself, Berg said he would encourage people to live with the understanding that death is present and to live life in a “more realistic sense.”

“It’s sometimes just a spiritual experience to think about, if you died today, how would the people around you remember you?” Berg said. “And I just think people should want to leave a positive impact so that when you are gone, people will look back and smile.”

Looking back at his NDE, Berg said it has made him reflect on what people would have done had he died. Would the school hold a tribute? Would people move on quickly or would they grieve and remember him fondly? These are the questions he asked himself.

Going back to school after getting out of the hospital, Berg said he was shocked at how willing people were to help him — whether it was family members taking work off to drive him to appointments, classmates carrying his books or teachers excusing him from final exams.

“I think just all of that together made me realize that interpersonal relationships seem like why I should be here,” Berg said.

While Anthony doesn’t hold the same religious perspective as Barton and Berg, he agreed that one’s impact on others is a key aspect of living.

“I think somebody only really died when you don’t really remember them or you don’t feel their impact on your life anymore,” Anthony said.

Though death is a heavy subject, those interviewed said they do not think that should halt dialogue about dying, especially among college students.

“I definitely don’t think people should stop talking about it or avoid talking about it,” Anthony said. “It’s very integral to the human experience and it’s very divisive, like our views on it largely influenced our religions and how we feel about certain things and the way we lead our lives.”

For young people it can be especially hard to conceptualize death, Hall said, but understanding it sooner in one’s life makes it that much more critical.

“I think the earlier you realize that you have this one life and it will end—the more you internalize that—I think the better chance that you will develop priorities about what’s important in life,” Hall said.

As college students, Berg and Anthony hold different perspectives on what acknowledging death means in their lives. For Berg, it’s a greater appreciation of the present and the people he knows here.

“I would say that I died before, so I’ll do it again,” Berg said, laughing.

For Anthony, death is very real, which motivates him to create a life worth living.

“But it’s scary—I’m definitely scared of it,” Anthony said. “I think part of it is building a life that when it comes time, you’re not regretting anything and you’re not wishing you could go back.”