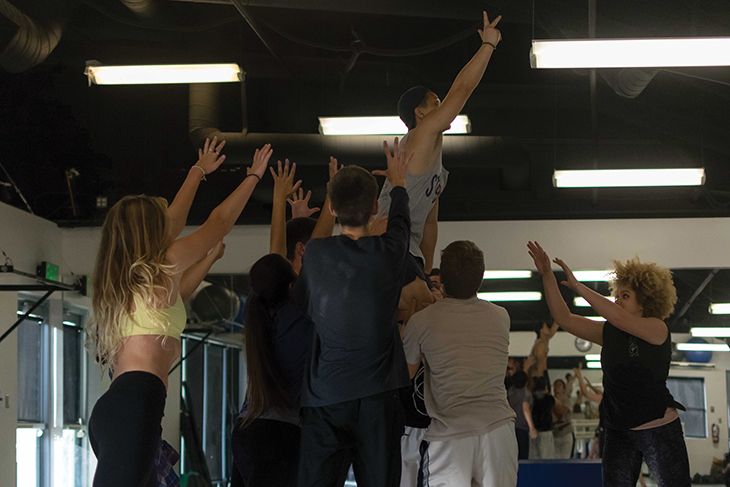 Student Activities put the brakes on two of senior David Limon’s choreographed LGBTQ+ themed performances for this year’s Dance In Flight (DIF) although the university has still not offered a clear reason as to why, according to student directors.

Senior Lauren Chong, this year’s creative director of DIF, worked closely with senior Lauren Sanchez, the company director, to develop the show’s theme during the summer. They chose to focus on social movements of the 1960s, including civil rights, women’s liberation, environmentalism, anti-Vietnam War and LGBTQ+ rights, Chong said.

DIF is an annual dance performance held at Pepperdine that seeks to promote and spread awareness of a relevant topic. But this year, amidst ongoing discussions about LGBTQ+ issues, the show’s theme and two specific choreography pieces have become controversial.

“We picked such an impactful theme for our show this year because the decade is very applicable to our current social climate, especially in light of recent occurrences, such as the Black Lives Matter movement and the Pulse nightclub shooting,” Chong said.

With the theme in mind, Chong said she and Sanchez moved forward with choreographer auditions, followed by company auditions in September. The choreographers engaged and discussed the theme during a retreat weekend in early September.

“We discussed the social movements of the decade, explored what it looked like then and what it looks like now, and identified the most important things Pepperdine students need,” Chong said.

She said she knew the choreographers had mixed feelings about the theme because of how difficult it is to discuss. But she said after conversations sparked regarding race and LGBTQ+ issues last year, “something needed to be done.”

Limon choreographed five dances and had four of the dances accepted into DIF. He said he was “skeptical of the theme [of DIF], but [he] was won over” after the retreat.

“It was very apparent that we needed to talk about the ongoing issues in society today and the safest way to do that was to place them in a different time,” Limon said. “So many of the social movements of the ’60s parallel the movements of today, so it seemed like the perfect setting to say, ‘It’s not over, it’s not fixed.’”

He came up with his choreography during a brainstorming exercise started by Chong, in which each dancer discussed personal identity.

“Being a member of the LGBTQ+ community, it was very important that this social movement was not left out of our performance,” Limon said. “I thought about Harvey Milk and the activism that happened during the ’60s. I did research on the community. What would it have been like if I had lived during that time? At Pepperdine, I know what it felt like to be in a closeted relationship, even though I was out. Thinking back to that place made me realize that I was living the life of a 1960s gay man.”

Rehearsals for DIF began the weekend of Sept. 21.

One of Limon’s pieces was a contemporary trio, in which two males and one female explored sexual identity, Limon said.

“I started thinking about struggles I’ve had in my own life that pertain to [the LGBTQ+] movement,” Limon said. “I think the most important part of it is making others realize that we are people and we, like them, struggle with all things. I wanted to show what it feels like to love someone you can’t have. And I was going to showcase that in the style of a contemporary trio.”

The other was a large group hip-hop piece that explored interracial, heterosexual and homosexual relationships as a celebration of love.

“I just wanted to create a piece that celebrated that now people can be fully happy and open in all relationships,” Limon said. “This piece, ultimately, was just a celebration of love — whether that be gay, straight, traditional or non.”

Limon said he choreographed these pieces to be an exploration of one’s actions and self-love.

“Realize that your actions affect others for years to come,” Limon said. “People who were fighting in the ’60s brought us to where we are today. We have a duty to realize that what we do today, and in the years to come, will affect those living in 2060.”

Soon after he started the choreography, Student Activities contacted Limon to set up a meeting time, as they were hoping “to be intentional in working with choreographers” to “offer any insight and feedback as [he] prepare[d] to teach,” according to an email exchange between Limon and Alexa Grambush, Student Activities’ Campus Programs coordinator and DIF adviser.

Limon said he met with Student Activities on Sept. 29, which included Grambush, Doug Hurley and Brittany Skinner in addition to Grambush. When he walked into the room, Limon said it “was a sad and heartbreaking atmosphere.”

Hurley then told Limon he would have to change his pieces and their choreography.

“Then all three of them [Hurley, Grambush and Skinner] started crying,” Limon said. “Any intention I had of fighting after that was gone, because I felt their pain and struggle of being in such a hard place with this [and] I know they fought as best as they could.”

Limon said he did not feel victimized or attacked; rather, he said he was validated in his feelings.

“It was a very affirming conversation,” Limon said. “They all affirmed who I was as a person and they expressed love for me. I felt so much love from them through the pain they had at delivering the decision to me.”

Hurley emphasized the affirmation that was given to Limon.

“Student Activities staff strives to honor students’ ideas, listen to their voice, believe in their ability, and breathe life into their creativity,” Hurley wrote on behalf of Student Activities. “There are sometimes frustrations and challenges that students and staff alike face as they navigate issues of tradition, embrace transition, and express themselves. Yet, we still seek to hold the two together: our students’ voice and our mission.”

Chong said she felt distraught at the verdict to change the core of two of Limon’s dances.

“The thought of artistry being censored is disheartening, because the arts are deeply reflective of our society and culture,” Chong said.

“I think of all the things Pepperdine could censor, the last thing should be art,” he said. “Art is, at its very core, about opening the eyes of its audience to the joys and struggles of life and humanity. A censorship of this is an injustice not only to those silenced, but to those who lose the opportunity to hear.”

Limon decided to change his large hip-hop routine after Student Activities made their decision.

“I changed it to represent the struggles I have faced both as a choreographer this year and as a member of the LGBTQ+ community in coming out,” Limon said. “This new piece is a message to all that the most important thing a community can do is ‘stand in the light and be seen as we are,’” the last portion of which is a line from the song the piece is choreographed to.

The reason for the censorship of the piece was to “uphold the University mission in our work and all of our programs,” according to Hurley.

“Throughout the process, input is often given to students on how their piece/costume/music/video is informed by the mission of the University,” Hurley wrote. “Student Activities works hard to bring students’ ideas to center stage, and also provides feedback and direction when the University mission seems unclear within those elements/pieces.”

Hurley wrote that the reason for the change in choreography boiled down to Pepperdine’s Christian beliefs on marriage:

“While ‘Pepperdine University affirms that sexual relationships are designed by God to be expressed solely within a marriage between husband and wife,’ Student Activities also seeks to recognize the LGBTQ+ community in meaningful ways … The desire to have LGBTQ+ representation in the show, within the context of the University affirmations, is an ongoing conversation Student Activities is having with student choreographers and student directors as we refine pieces and finalize show content.”

Chong said that even with this desire on the part of Student Activities, censoring Limon’s dance pieces raised more questions about LGBTQ+ relations on campus and the role of the recently established Crossroads club.

“As I was guiding the choreographers, I thought that the creation and approval of Crossroads as a club meant that DIF, another student-led club, could explore topics such as LGBTQ+ rights,” Chong said. “Now, I wonder if Crossroads may be the only ‘safe space’ intended by the University in which to explicitly explore these issues.”

Limon spoke to the Crossroads club during a “safe space conversation,” where he expressed his confusion regarding Student Activities’ decision about his pieces.

“I felt that they had the right to know that a decision that was affecting our community was being made, and I wanted our stories to still be heard,” Limon said.

Senior and Crossroads student leader Cameron Hart wrote in an email that he was more than happy to listen to Limon’s story.

“We (Crossroads) have supported David as we would any other student that approaches us — with open arms, unconditional love and ready to listen,” Hart wrote.

Chong said she believes DIF has a part to play in influencing the culture on campus.

“DIF is going to be more than a show this year: It’s going to be a campus-wide movement,” Chong said. “Our intentions for the show are not to polarize, but to be intellectually stimulating and spiritually awakening. I hope people will walk away reflecting on what they can personally do to help further social justice.”