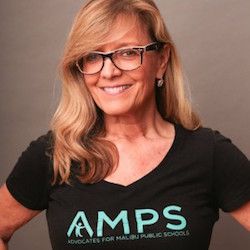 One can use many different adjectives to describe 2016’s political climate, but boring certainly isn’t one of them. If a candidate wants votes, they are going to need to stand out from opponents in some way or another, and the Malibu city council race is no exception.

Laureen Sills has lived in Malibu for 30 years and has spearheaded many civic campaigns in that time, from fighting the LNG plant off the coast of Malibu, to helping Malibu achieve cityhood, to her future project, Local Lands and Local Hands, according to her website. Now, she’s running for one of three Malibu city council spots to serve her city.

Sitting in Coffee Bean & Tea Leaf in the Malibu Country Mart, Sills decided to wear sunglasses on top of regular glasses and very much radiates a Southern Californian vibe with her blond hair and bohemian-chic attire.

Sills said Local Lands will help the city purchase some of the Malibu hillside so that the citizens can decide for themselves what to do with it.

“There’s property up here by City Hall, it’s called Upper Yamaguchi Land. I want the city to buy it, and then they can do what they want with it,” Sills said. “I think everything should be open to the public to discuss. When you’re making big land decisions for the city, it needs to be out in the open.”

Development in Malibu is a very important issue for Sills, but she opposes Measure R, which all of the other candidates approve of. Measure R is an ordinance led by film director Rob Reiner that would put the construction of any development over 20,000 square feet up to a public vote, and would reduce the amount of chain stores and restaurants in the city.

This sounds like something an anti-development candidate like Sills would approve of, but surprisingly, she said she’s against the ordinance.

Because Measure R is so popular in the Malibu community, Sills jokes that she probably opened the gates of hell by proclaiming she was against it. She even said the local press might come after her.

“[The local press hates] my position on Measure R. You’ll see me in the newspaper, next week probably, driving a backhoe. They’re going to have me with a helmet on, and all the steam shovels here ruining Malibu.”

Sills also said she believes that climate change is a massive crisis that Malibu will soon have to contend with, and she said the rising sea levels will definitely cause some major changes in how the city will operate.

“The biggest issue on a big-picture scale is climate change, because, well, it’s very obvious when you look around Malibu: You can see our charred hillsides, no water, lack of rain, you can see how the rise in the sea level has changed the beaches, especially over at Broad Beach,” Sills said. “If you look at some of the parts of PCH that will be imperiled with the rise of the sea level, so we’re going to have to address on a bigger picture how we’re going to have residents come in and out of the city. Are we going to do bridges, or what are we going to do?”

Finally, the third major issue that Sills is running on is the contentious debate of potentially splitting the Santa Monica-Malibu Unified School District in two. Sills said she is absolutely for it, and she said she even has a rebuttal for those who say a split would negatively impact lower-income Santa Monica students.

“They will not be left out. Santa Monica has a bigger tax base than we do,” Sills said. “They have sales tax that we can’t even touch; they spend tons of money on their schools. The split isn’t going to happen if the Santa Monica side loses, it’s just not going to happen. No one’s going to screw over the inner-city schools.”

Laureen is running for one of three open city council spots with six other canidates, and three canidates in particular have decided to team up: Jefferson “Zuma Jay” Wagner, Skylar Peak and Rick Mullen. They call themselves “Team Malibu,” but Sills says she calls them something she thinks is a bit more accurate: The Bro Slate.

Sills stated that a part of her campaign that helps her stand out is its grassroots vibe. She remarked that she doesn’t have a campaign manager, and she’s mostly campaigned simply by using social media and talking to strangers. She said this stands in stark contrast to her main competitors, and even implied there might be some foul play involved.

“I don’t have a campaign manager, but the Bro Slate does,” Sills said. “I did it legally because you’re only allowed to put up signs where you’re allowed to do it. Generally, my signs have already been taken down by … I don’t know who.”

Regardless, Sills said her campaign is one of civility and honesty, and she said she’s proud of how she’s managed to keep it mud-free.

“I throw no shade. I don’t do it,” Sills said. “I’ve managed to run the campaign without going negative at all.”