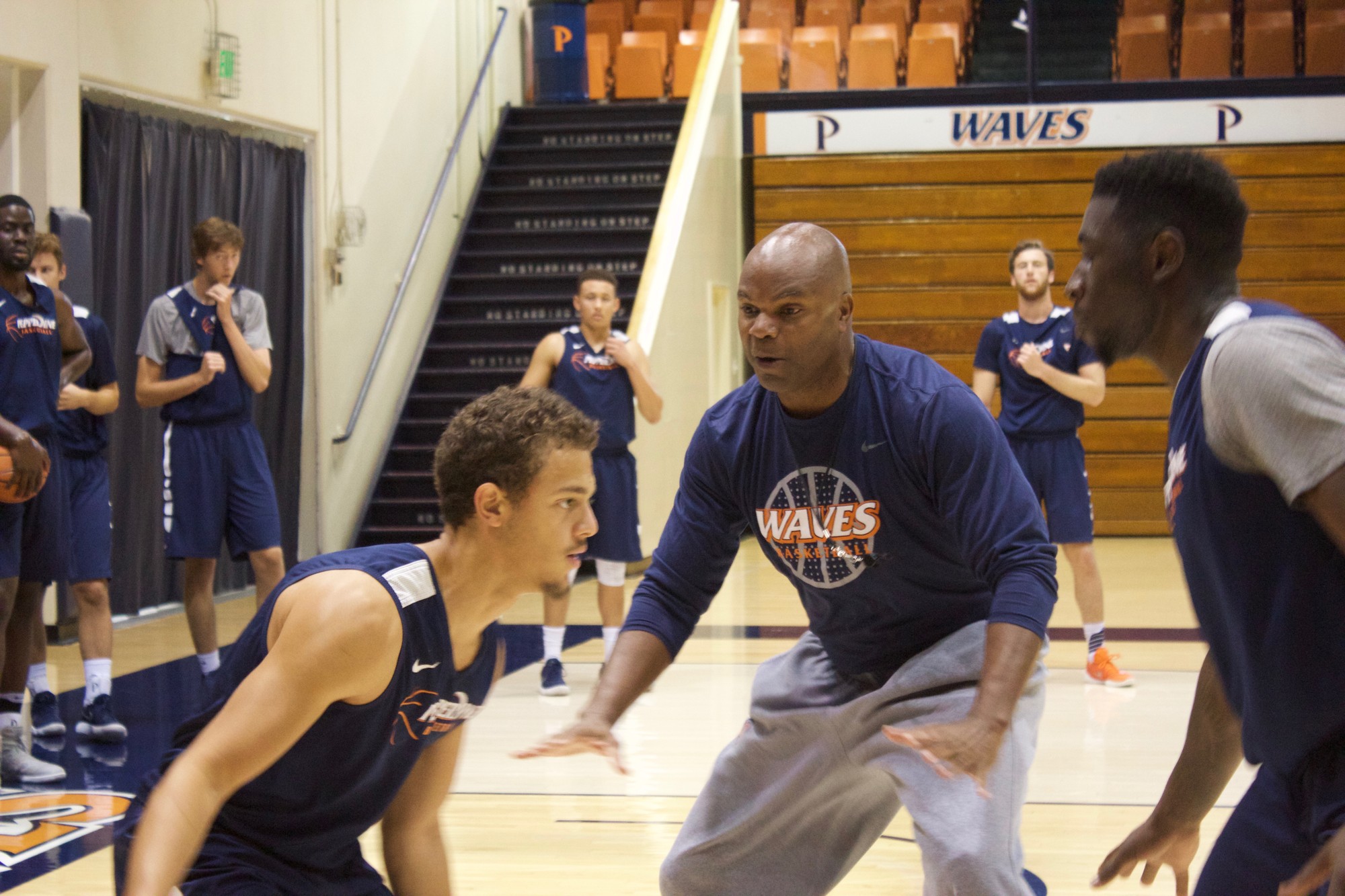 “Initially [basketball] was, growing up in a single-parent family, an opportunity for my mom to keep me out of trouble in my neighborhood,” Wilson said. “So my mother got me involved in it. Fell in love with it from day one, and have been doing it forever. One of my older brothers played. One of my older sisters played. So I just continue to love it and I would follow my older brother everywhere. He’s 6 years older and I would follow him everywhere so I could play ball or just be around him.”

Since then, Wilson has been involved in every aspect of the game: as a player, a rookie assistant coach, an assistant in developing, an interim head coach and now as a head coach. When he played at Pepperdine in the early 80s and then coached in the 90s, it was at one of the all-time highs of Men’s Basketball.

Not only did Wilson grow up with basketball, but his own family is also involved with the sport. Wilson’s son Jalon is serving as a Pepperdine Men’s basketball manager.

“Basketball is on his brain,” Wilson said.

Jalon played basketball all his life, and finished his career as a player two years ago at Ventura Junior College. After undergoing one wrist and four knee surgeries, the younger Wilson realized his body couldn’t hold up for two more years to the rigors of basketball, so he decided to give it up for a position on the other side of the game: coaching.

Jalon jumps in a drill every now and then, constantly thinking of new ways to help the players learn. He has had an internship for the past year with Russell Westbrook and other high-level NBA players. They’ve formed a great relationship and he is excited for what is to come.

“I want to pursue coaching because of my love and passion for the game,” Jalon said, “I also want to give back to the game of basketball as much as the game has given me. I was always a selfless player when I played, trying to make my teammates better, so the transition from playing to coaching isn’t so hard because that’s what I’m doing now. Only difference is I’m wearing a suit instead of shorts and a jersey,”

The elder Wilson said he sees several life lessons in basketball that can be applied to his family relationships. The first is the structure of discipline and the second is teamwork.

“The lessons are endless, and the comparisons [between the two] are endless,” Wilson said. “I think that one helps the other. I think me being a parent helps me as a coach and viewing my communication with our players through the eyes of a parent as opposed to just a coach.”

The second lesson is teamwork. A family is a team, just as a group of basketball players are a team. They work together for the betterment of each other. The Men’s Basketball team consists of players around the same ages as his own kids, which Wilson believes helps him to relate and communicate better with the team.

“Obviously, family is everything to me,” Wilson said.

In balancing sports and family, the Wilsons know that the basketball season gets busy, but Wilson said family always comes first.

Wilson said he sees his players through a familial lens. His favorite thing about coaching is seeing his players develop, grow and mature from freshman to senior year.

Wilson loves seeing his players become amazing husbands and fathers because of something he taught them so long ago. Wilson said it’s a special feeling when former players share with you how much you’ve had an impact on them and their lives. Wilson is still in touch with his teammates and coaches, 30 years later.

“I received a text a few weeks ago on my birthday,” Wilson said. “One of our former players thanked me and wished me happy birthday. And told me how much more he appreciates me and what we were trying to do now that he’s in the work force. That was touching.”

On the same note, Wilson noted the overall impact that coaches can have on players.

“The long-term is when players get married and they invite you to their wedding. It means something, that you had that connection,” Wilson said. “And when you get a chance to meet their kids, and majority of them are still young, but to have that relationship where you meet their kids and their families, it means obviously you did something right in their lives and hopefully touched their lives where you can help them develop as men as they help develop their kids as well.”

When asked whether he’s ever had doubts, Coach Wilson said, “You know what, I think most coaches do if you’re having a bad season or a tough season, or you’re just overwhelmed with just the stresses of being a coach because you juggle so many different things and then you add on a bad season. I’ve had those conversations years ago and then recently with my wife, saying ‘Boy, I need to get out of coaching.'”

“And her immediate response [has] always been the same: ‘What else would you do? You love basketball so much.’ So I’ve never really thought deeply of it because I don’t know what else I would love and enjoy as much as I love basketball.”