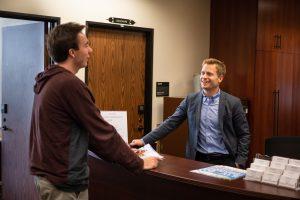 Charlie Engelmann, director of Asia programming for International Programs, greets a student in the IP office Nov. 4. The IP office has started accepting students into the summer 2023 and academic year 2023-24 programs. Photo by Lucian Himes

International Programs is continuing to receive student applications and send out decisions, which will continue throughout the fall semester.

Across six academic-year and 11 summer programs and terms, IP accepted two-thirds of students to their first choice program, which is consistent with the IP office’s historical trend data, Greg Muger, director of International Programs, wrote in an Oct. 27 email to the Graphic.

“We will regularly admit students to programs twice per month until about three months prior to the program departing,” Muger wrote. “Though, I prefer we get you into a program so that you can take advantage of the study abroad opportunities we have offered them.”

Muger wrote there are more than 150 spots available for 2023 for all programs.

“Due to the larger size of the freshmen class, we offered more single semester study abroad opportunities to meet demand,” Muger wrote. “As a result of this action, we have a lower than average number of students that received a waitlist decision.”

First-year Elle Chapman said she is excited about her acceptance into the London program for the 2023-24 academic year.

“I visited the London Pepperdine campus over the summer and fell in love with it,” Chapman said.

The IP office uses a system where students can rank up to six programs in their application, which gives students a greater chance of going abroad, Muger wrote.

During Chapman’s application process, she said she met with her academic adviser, and they compiled a plan for studying abroad together. Chapman said she began thinking about the process in the summer.

“Since I started early on, I could put my best foot forward,” Chapman said.

Chapman said her parents raised her to value the importance of traveling. Chapman said she made the decision to come to Pepperdine because of its renowned international programs and chose London because it is a “hub for business,” which aligns with her Business major.

Chapman said she is excited to visit her friends in their abroad locations next year as well, but she is concerned about being apart from her family — especially during the holidays.

The Japan program received nearly four times more applications than there are available spots, which are limited, Muger wrote.

Junior Savannah Sichelstiel applied for the Japan summer program because she is interested in Japanese culture and exploring the country.

Although Sichelstiel is waitlisted for Japan she said she is still hopeful.

“I am not apprehensive about much, only the cost of the trip and the fact that there is still a chance I may not be going, even though I am hopeful,” Sichelstiel said.

Muger wrote the Florence program received the highest number of applicants compared to other programs. Florence has a typical enrollment of 50 students.

Some summer programs received fewer applications but Muger said this is a normal occurrence because the IP office accepts applications for summer 2023 until Jan. 30.

Sophomore Cate Cartier said IP accepted her into her first choice program, which is Florence for summer 2023. She also applied to London and Switzerland to maximize her chances of getting into a program. Cartier was supposed to go to London for fall 2022.

“I withdrew from this program because it felt too long away from my family and friends,” Cartier said. “But I feel that going this time in the summer will be enough to get me out of my comfort zone, but not for too long.”

Alsarraf said she has not looked much into the specifics of the program yet but is excited about learning the new culture and language.

First-year Bohuen Tong applied and IP accepted her into the Switzerland spring 2024 program. She will be staying at the brand new Chateau and said it would be her first time in Europe.

“I took French in high school, and I want to expand on my French, but I am also excited to learn about all the history the new Chateau has to offer,” Tong said.

Upcoming opportunities for students going abroad is the “Launch,” where all new students celebrate their future adventures, enjoy food and get to know others in their future program, Muger wrote.

There will be a passport fair for students to get their passport renewed or apply for one for the first time, and the program ambassadors will host events for specific programs all in the near future. The orientation for the programs will occur in the spring, Muger wrote.

Alsarraf said she looks forward to getting closer to people she hasn’t yet interacted with at Pepperdine, learning a new culture and opening her worldview.

Tong said she cannot wait any longer to study abroad, a year from now is too long away for her to begin her adventure.

As a first-year, Cartier said it felt like there was only one opportunity to travel abroad and it was a lot of pressure for her, but she said there are so many opportunities to study abroad at Pepperdine.

“At least apply, you will lose nothing but can gain so much from the opportunity,” Muger wrote. “Adventure awaits.”

Programs that are still accepting applications are listed on the IP application page.