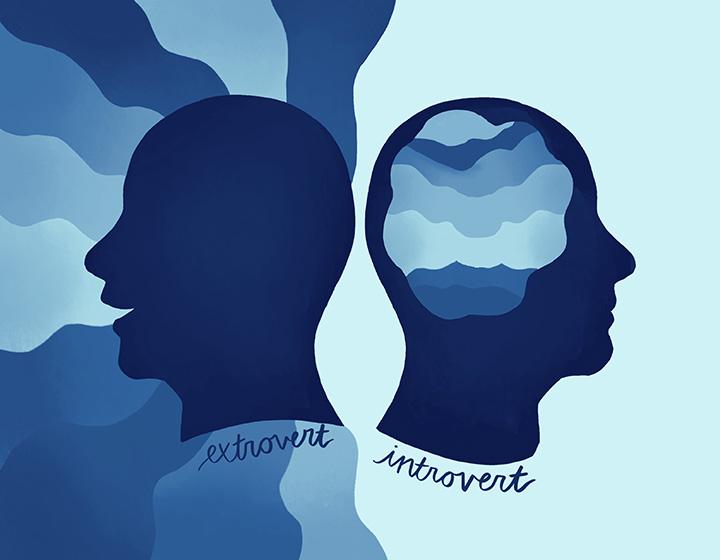 When it comes to humans’ social preferences, everyone’s are a bit different. While some prefer to be around other people, others keep to themselves.

“It’s a continuum,” Psychology Professor Cindy Miller-Perrin said. “There are few people who are out on the extremes.”

A self-identified introvert, Miller-Perrin said the words introvert and extrovert are thrown around quite a bit in classrooms and workplaces. However, many people may not understand exactly what they mean.

“Over the years, people have sort of equated introversion with shyness,” Miller-Perrin said. “Shyness reflects an anxiety or discomfort associated with social situations, but introversion is really just a preference.”

Extroverts, like her husband, Sociology Professor Robin Perrin, tend to be more comfortable with bigger groups and more likely to find enjoyment in engaging in lots of social activities. Perrin said he can be the life of the party, from chatting people up on the golf course to speaking up in large groups.

Both Miller-Perrin and Perrin study introversion and extroversion academically, but they approach them from different disciplines. For Miller-Perrin, the two sides are traits which different people exhibit based on a combination of genetics and experience.

“There’s a pretty significant biological component to personality traits, so we inherit part of our disposition genetically,” Miller-Perrin said. “But that doesn’t mean that certain experiences can’t also shape who we are.”

Sociologists like Perrin look at introverted and extroverted personalities as different responses to humans’ social conditions. He said whether a person is an introvert or an extrovert, at the end of the day humans are social beings.

“That means we look to others to help us understand who we are,” Perrin said. “We are unique to us among mammals.”

Natalie Forde, assistant director of International Programs and adjunct professor in the International Studies and Languages Division, helps students in her first-year seminar learn about their social preferences by having them take a Myers-Briggs test. The test asks a set of questions about personality and identity in order to better understand how a person works socially. The results come in the form of a four-letter acronym like “INFP” or “ESTJ,” which describe a person’s introversion/extroversion as well as multiple other identity factors.

While Forde said the test isn’t a perfect way to evaluate someone’s personality, it can be helpful for students to get to know themselves more so they can better understand their needs and wants.

“I’m definitely an introvert,” Gettinger said. “I like hanging out with my close group of friends, but when it gets to be a lot of other people involved, I kind of phase out.”

Gettinger said he’s known this about himself for as long as he can remember.

“I think I’ve always kind of been like that. Not that it necessarily gives me anxiety,” Gettinger said. “But it just makes me feel claustrophobic, I guess, when I’m in big crowds.”

Born and Gettinger said they thought being introverted has its advantages, like being self-reliant and independent. However, it comes with challenges as well.

Miller-Perrin said humans live in an “extroverted world,” a society set up to function well for extroverts; operating in this society as an introvert can be difficult. Pepperdine especially is a community that may be more natural for an extrovert, Miller-Perrin said.

Sophie Tarditi is a first-year student and an extrovert who said she learned about human interaction from a young age through performing arts.

“I started doing theater when I was really, really young,” Tarditi said. “It helped me with talking to other people because I had been so experienced with performing on stage.”

Theater helped Tarditi to open up, as she believes there was a time before acting when she was much less of an extrovert.

“It helped me more with talking to other people because I had been so experienced with performing on stage and performing with other people,” Tarditi said. “That made it more comfortable for me to actually talk to people outside of [that environment].”

Social, at a distance

“It’s definitely really difficult to live out my extroverted self just because of what’s going on,” Tarditi said. “I love just seeing other people. I love talking to other people.”

For many first-year students, meeting so many new people in the first few months of Pepperdine can be overwhelming. This year, however, people who crave human interaction like Tarditi have to take extra initiative to get to know their classmates.

“Probably the best way I’ve been meeting people is through social media,” Tarditi said. “I’ll see people who are in my grade and who are staying in the Malibu area, and I’ll just DM them and ask if they want to meet. Socially distanced, of course!”

Introverts Born and Gettinger said the virtual campus brought neither a positive nor a negative change.

“From a social standpoint, it really hasn’t affected me because I don’t really need to talk to people all day, every day,” Gettinger said.

However, Gettinger said he took the little interactions he had with people every day for the past three years for granted.

Social distance learning is one of few contexts in which it seems, to Miller-Perrin, that the introvert is at an advantage.