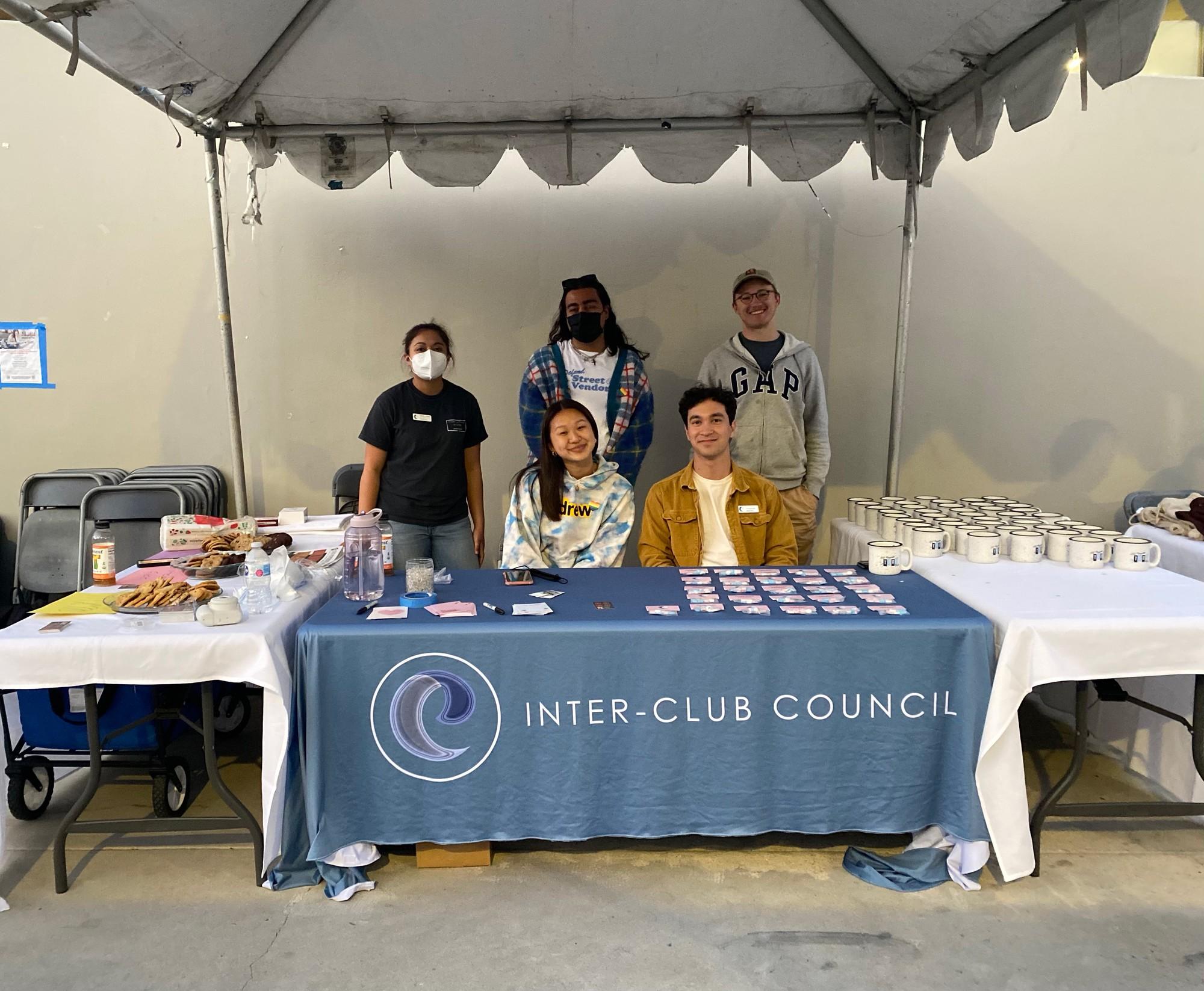 ICC members host an in-person club fair for clubs and organizations Feb. 18. ICC executive board members gave away mugs and cookies to students who attended. Photos by Christina Buravtsova.

ICC President Jerry Calderon and ICC Executive Vice President Gabby Dardano said they wanted clubs to have a chance to connect with students in person in addition to the virtual club fair from January — Tidepools. ICC collaborated with the Student Programming Board to put together the club fair.

“I’m most excited for our club leaders to gain that membership and have that face on campus,” Calderon said. “We just want to see our clubs grow, maintain and be the best that they could be with the mission that they outlined for themselves.”

Although many of the established clubs and organizations completed recruitment earlier in the semester, Dardano said the in-person club fair gave newer and smaller groups a space to interact with students and gain more exposure.

“I’m just really happy that we’re able to give these clubs their opportunity because we got so many new ones,” Dardano said. “I want them to be able to expand, get more members and be able to do more exciting things in the organization.”

Fifteen clubs and organizations tabled at the fair, Dardano wrote in a Feb. 21 email to the Graphic. Of the eight new clubs approved this semester by the ICC, four attended the fair.

First-year Ayon Wickramasinghe was one of the four new club leaders present. Wickramasinghe started the Beatbox Club this semester and said he wanted to spread the word about the club.

“This is a brand new club so it’s pretty hard to get the name out there,” Wickramasinghe said. “So being out [at the club fair] where people are just walking passively, I think it’s the best way.”

Wickramasinghe said he found his love for beatboxing during the remote school year and now wants to share the craft with more students.

“I love beatboxing and I think it’s an art form just like any other type of music,” Wickramasinghe said. “I want people to discover it like how I discovered it.”

“We’re always looking to grow and get more people inspired to write,” Kovie said. “A lot of people get really scared if they’re not an English major or Creative Writing major so we’re just trying to reach more people on campus.”

Yoga Union Club Vice President and first-year Ria Frenzel promoted the new yoga club at the club fair. Frenzel said she believes yoga is a great way for college students to unwind after a busy day and hopes that her appearance at the club fair will spark a larger turnout at the club’s events.

“We just got approved this semester,” Frenzel said. “Our main focus is yoga and getting people involved on campus and just spreading yoga love.”

Les Petites Conversations Club tabled at the club fair to attract more students interested in the French language and culture. Although the club has been around for a couple years, club officer and first-year Molly Sheridan said she felt that not enough students knew about the club’s existence.

Importance of Being In Person for Clubs and Organizations

Like several of the club leaders, Dardano said the in-person aspect of the club fair allowed students to have more memorable and effective interactions with each individual club. Students could get a sense of a club’s members and the club’s mission.

“Because of what has been happening the past few years with COVID, people respond differently to in-person interaction just because it’s something that we missed so much,” Dardano said. “It’s better to be able to just to see what’s on [the club’s] table, see their signs, see their brochures and get a better sense of who the club is by the general atmosphere of being outside and in that space with all of them.”

Kovie said being on the Peppervine website is not enough to grow awareness — in-person interaction is key.

“People don’t really go through Peppervine and look at all the organizations,” Kovie said. “But, if you can make a face-to-face connection then they find out about you.”

Collaboration between ICC and the Board

“It was kind of more of a coincidence that we had our Tidepool mugs that we were going to give away at the club social and they have a Coffeehouse,” Dardano said. “So we kind of were like let’s put the two together and make a joint event with those two visions.”

Calderon and Dardano said they hope to collaborate with the Board for future events.

“We’re in the office all the time with the Board so we have a very good relationship and friendship with them,” Dardano said. “I would love to do more collaboration with the Board, especially on some of their smaller-scale events like Coffeehouse and club social.”

Continuing in-person events is important to the growth of on-campus clubs and organizations because they provide an opportunity to appeal to more students and gain loyal membership, Calderon and Dardano said.

“These social events really become that space for these clubs to reach out to a larger audience,” Calderon said.