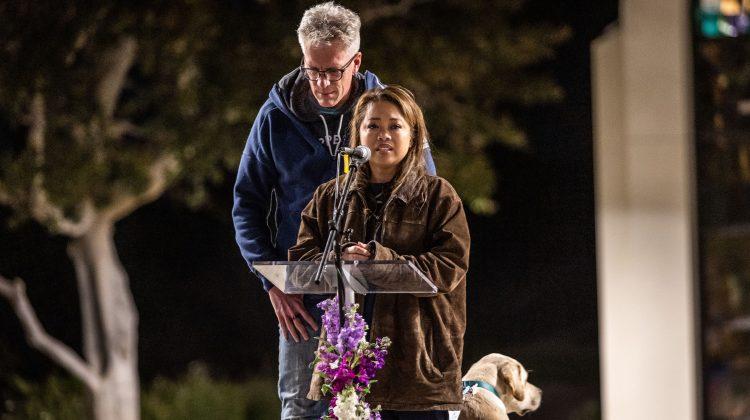 It was sunny and hot at Drescher Campus. The sky was blue, cloudless and the wind whipped through Hero’s Garden, ropes beating loudly against the metal of the empty flagpole. Gary and Ellen Tennison sat on the patio outside the Villa Graziadio Executive Center, their backs turned away from the afternoon sun, Finley the labrador retriever curled up between their feet.

The couple had spent the morning going through their daughter’s things. It was day two of the endeavor, rifling through a closet full of clothes, organizing what would stay and what would go. A few items made the cut — Sassy, a stuffed husky Autumn had owned for two decades, some jewelry, some makeup. The rest would go to her friends and sorority sisters, maybe donated.

Gary and Ellen Tennison had been on campus for a few days, with plans to stay through the week. Even through their fatigue, their love for Autumn shined through their voices.

Autumn was a homebody, she loved her room. She ate there, she did art there. It was her safe place, her parents said.

Autumn had a quiet stillness about her, she wasn’t fake or trying to be the center of attention. She was a good listener.

“With the image she always wanted to put up, she was real,” Gary Tennison said.

Autumn loved over salted popcorn and added all kinds of extras to it like cheese and jalapeño powder. She was particular about her eyelashes and always had killer eyeliner and brows. She turned 21 in October and enjoyed fruity drinks like moscato and SunLife smoothies.

She loved a brand name — Louis Vuitton was her most recent addition to the collection over Christmas break.

The last day of spring break, March 5, Ellen Tennison said they spent the day together at home, getting acrylic nails, buying a new piercing for Autumn’s nose. Autumn picked out Ellen’s color, she said.

She loved art. She designed stickers to raise money for I Support the Girls, an organization that helps to fund the distribution of essential items to women experiencing homelessness. Autumn was a singer, but she never let her parents hear.

“I’m hoping her friends got to hear her sing,” Ellen Tennison said.

She was the baby of the family and above all, Autumn was a daddy’s girl.

“I’m going to miss when I genuinely saw her smile,” Gary Tennison said. “I know she’s my daughter, but she was so pretty when she lit up.”

When looking at colleges, Autumn thought Pepperdine was out of reach, her parents said, worried that she wouldn’t be admitted. Autumn wanted to be in Los Angeles, she was into fashion and all the new trends and loved being by the ocean.

She applied to Loyola Marymount early action and committed, but once she got her acceptance to Pepperdine, she knew Malibu was where she wanted to be.

Leaving for college was hard for Autumn. She graduated from Robinson High School in Robinson, Ill. in spring 2019. Coming to Malibu her first year was escaping an abusive relationship with a boy who wrecked her spirit, making her doubt herself and her worth. She had a habit of picking the wrong boys, her parents said.

“She wanted to save him,” Ellen Tennison said.

But once at Pepperdine, Autumn found community in her suitemates. They taught her that she was worth more than what some stupid boy back home said and she began to heal, her parents said.

“They were teaching her to accept love,” her parents said.

Autumn started at Pepperdine as a Biology major. Both of her parents are doctors, and while they didn’t want her to pursue medicine just for their sake, she decided to give STEM a shot nonetheless. She quickly discovered Biology was not for her, feeling intimidated by the looming statistics that very few Pepperdine Biology students graduate with a 4.0 GPA.

She tried Nutrition briefly, but that wasn’t right either. So she turned to Creative Writing. Autumn had big dreams, aspiring to work for Vogue because she loved fashion. She also thought about getting a minor in Education and teaching post-graduation. She considered starting her career up in the Seattle area, too.

Even while at school, Autumn stayed connected to her family and friends back home. She had a Snapchat streak with her dad dating back 1,381 days as of March 7 and an even longer one with her elementary school friend Emma.

Gary Tennison said Autumn Snapchatted him every night, usually around 2 a.m., because she was convinced it had to be at the same time every night to keep the streak alive.

COVID-19 was devastating to Autumn, her parents said. She was unhappy going home to Illinois in March 2020, and she wanted to be back in California, back at school. She would watch movies with her friends on FaceTime every Thursday, staying connected even when apart.

For the 2021 academic year, Autumn and her best friend Justin Selva rented an apartment together in Simi Valley. She participated in sorority recruitment in fall 2020 and joined Kappa Alpha Theta as part of PC20.

Toward the end of her sophomore year, Autumn wasn’t doing well. She had gone through a devastating breakup, her parents said — the boy wasn’t the issue this time, she was happy with him. She just wanted someone to love, her parents said. But the dark thoughts Autumn struggled with often loomed much larger now.

She was rushed to the hospital for an emergency evaluation of her mental health and it was the Student Care Team who attended to her, her parents 2,000 miles away back home. Ellen said she would never forget how helpful and kind the team was.

The doctors questioned whether she was suicidal, she told her parents she wasn’t. She didn’t have a plan, she assured her parents, she never really thought about it.

“Autumn always felt like she was broken, that there was something wrong with her,” Ellen Tennison said.

LaShonda Coleman and the Student Care Team made sure Autumn was safe, they and the school psychiatrist made sure she got medications and treatment, and she began healing, moving forward.

The 2022 academic year was better. In December, Autumn got a service dog, Finley, from Ultimate K9 in Indianapolis. She had always loved dogs. Autumn got more involved in Theta.

Losing Autumn was completely unexpected. Autumn had dark days, her parents said, but those tough conversations are something they said they would miss.

“I’d trade any hard day for what we have now,” Gary Tennison said.

Her parents will leave Malibu with a handful of Autumn’s things, an urn and heavy hearts, but a peace in knowing Pepperdine was where Autumn belonged.

“She was in the right place,” Ellen Tennison said. “[Pepperdine’s love] is something we’ll never forget.”