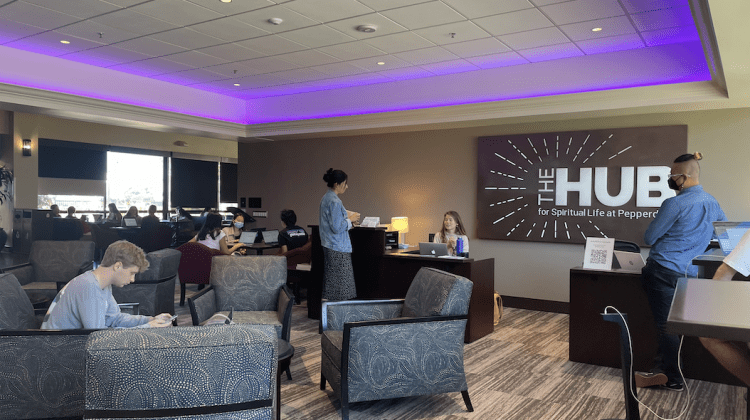 Students and staff gather at the Hub for Spiritual Life on April 5. The Hub granted nine students scholarship as part of the new Spiritual Leadership Cohort program to encourage members to deepen their own faith and lead others in their faith journeys. Photo courtesy of Ali Levens

The first Spiritual Leadership Cohort Scholarship program will begin in the 2022-23 academic year with the nine students receiving a scholarship.

Through mentorship with staff from the Hub for Spiritual Life, community with one another and exploration of faith, Assistant Chaplain Shaya Aguilar said the cohort’s goal is to guide members to find their vocation. Sophomore Zacharias Tapp, one of the nine scholarship recipients, said he is most excited to strengthen his faith alongside his peers and mentors.

“Growth comes when we’re not so solidified in our own beliefs and customs and are open to other people’s expressions of faith,” Tapp said. “I hope that I come out of the cohort open and also learning how other people connect with God and adapting some of those things into the way I practice my faith.”

When Aguilar (’20) began her position at the Hub in July 2021, she said there was funding left for a program but they did not know what that would entail at the time. After noticing students wanted learn to lead others in faith while also caring for their own spirituality, Aguilar said she began to brainstorm the concept of the cohort.

The key aspect to the cohort is that each member will partner with a mentor from the Hub to guide them through their own journey to becoming a leader, Aguilar said.

As an undergraduate student, Aguilar had a spiritual mentor who she said had a big impact on where she is in her career today — and she wanted that for cohort members.

“I think it [mentorship] is really important for student ministry leaders who feel like they have to have the answers for the students that they’re serving,” Aguilar said.

The Hub paired students and mentors based on answers students gave during interviews for the scholarship. This way, Aguilar said each mentor is someone who can address the student’s specific needs and spiritual gifts.

Seven out of the nine cohort members are rising seniors, and Associate Chaplain Rachel Collins said they will learn to lead and serve in their careers after Pepperdine. Collins said many of the students intend to enter ministry, so having this extra resource from the Hub will help prepare them.

“The students will spend a lot of their hours working with different areas of the Hub for Spiritual Life,” Collins said. “So they’ll also have a little mini group in addition to all working together.”

“We will do a lot of data mining and get lots of feedback and interviews at the end of the first year so hopefully we can create a sustainable program,” Collins said.

When Tapp saw an email about the cohort applications at the beginning of the spring 2022 semester, he said he and friends in the London abroad program talked about applying. Tapp said he saw this as an opportunity to connect with Pepperdine because he has never lived on campus. He was also nervous that factor would lower his chances of being accepted into the cohort, Tapp said.

“It was a little intimidating at first,” Tapp said. “I didn’t know how they’d react because obviously I’m not as connected as someone who would be on campus and I don’t know as much about the Spiritual Hub.”

One of the main reasons Tapp said he chose to attend Pepperdine was the faith aspect. He said a key element to developing and expanding one’s faith is having a community with the same goals.

“Why would we want to have our faith be individualistic and just contain it to ourselves when we have each other to grow with?” Tapp said. “That’s the beautiful thing about faith and about college is that you meet people that you can depend on.”

Junior Emily Audras wrote in a March 24 email to the Graphic she applied for the cohort hoping it would guide her during her senior year toward her vocation. Right now, Audras wrote she plans to be a high school English teacher, but she also has a passion for ministry.

“I’m more and more torn, as I find myself drawn towards ministry, and particularly towards worship music, with every passing year,” Audras wrote. “So, through this cohort, I hope to see if God is drawing me to pursue that aspect of my calling more fully, or if there’s some hybrid blend of the two that would be possible, or perhaps if there’s something altogether different that I haven’t thought about that God wants for my future.”

Audras wrote she also will have the help of her mentor and fellow cohort members to support her through that discovery process.

“I hope that God will guide me vocationally, clearly directing me through these experiences towards whatever amalgamation of jobs will glorify Him the most,” Audras wrote.