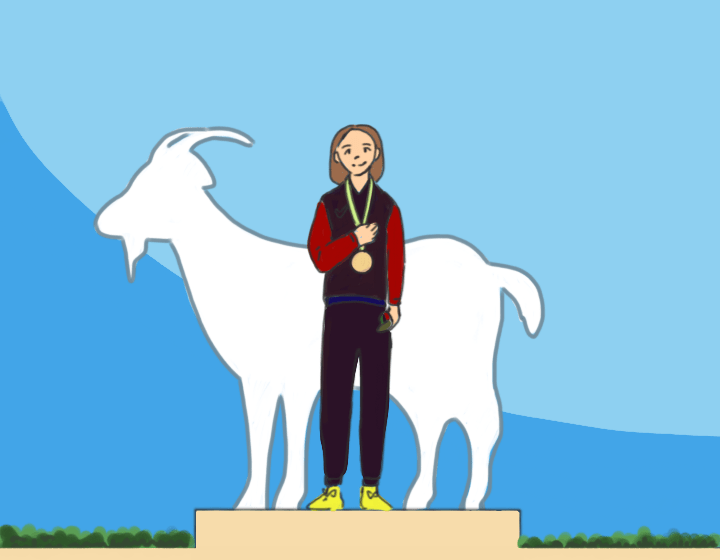 You hear it at every professional swim meet.

Over the sound of a starting gun and the splash of water is a whisper that brushes the announcers booth and resides over the crowd.

“Is this the next Michael Phelps?”

Personally, I’m over it.

Instead of focusing on what Michael Phelps has done, we need to instead look at Katie Ledecky, who doesn’t just stand up to the legacy of Phelps — she outshines him.

Ledecky and Phelps both compete at the top of their field. I’m not arguing Phelps isn’t one of the best at what he did; that’s not worth the argument (or the word count).

Here’s what is worth 800 words: We should stop looking for the “next Michael Phelps,” as some say, and start focusing on the remarkable athletic prowess of Ledecky.

Armed with my experience on the middle school swim team and need to give unsolicited opinion at all times, I will be diving into the world of swimming and announcing an opinion I have held close to my heart for half a decade.

Let me start at their Olympic debuts — a lane marker in any swimmer’s career.

Both Ledecky and Phelps competed in their first Olympics at the age of 15. Phelps participated in the 2000 summer games and made history as the youngest male swimmer to be a part of the team in 68 years. Phelps, however, did not medal in his event.

Ledecky swam as the youngest U.S. athlete in the 2012 Olympic games and not only got on the podium for the 800-meter free; she won gold and set a U.S. record by over a second — a phenomenal time in swimming, in which events come down to fingernails.

Less than a year later, Ledecky broke world records in the 800-meter and 1,500-meter freestyle, along with a second American record in the 400.

Less than a year later, Phelps broke one world record with the 200 fly, but the key word there is “one.”

Now let’s flip-turn to a discussion of the range of these athletes.

“But the individual medley has multiple strokes,” you cry.

For anyone who does not know what an individual medley is, it is an event where competitors swim each of the four strokes in succession: butterfly, backstroke, breaststroke and freestyle. In the 200 IM, swimmers swim 50 meters of each stroke, which is one Olympic pool length.

In this event, swimmers usually excel at a certain stroke, such as the butterfly. Swimmers will use their dominant event to get ahead of or catch up with the pack, depending on where their dominant stroke falls in the sequence.

Phelps excels at butterfly and freestyle, but all of these events are sprints. While he may seem to have more versatility than Ledecky in terms of the type of stroke he swims, Ledecky blows him out of the water in terms of distance.

Ledecky also can sprint, which the 200-meter freestyle shows, but sprinting is not all she does, she also has an impressive amount of endurance.

Ledecky swims the 1,500-meter freestyle. That’s two pool lengths short of a mile. Shameless brag: I have both swam and ran the mile. Swimming is a whole different beast. This event hurts.

And because few people in their right mind decide to swim practically every single event for a particular stroke, Ledecky’s 1,500 and 200-meter races fell on the same day for the 2021 Olympics.

Quite frankly, if I was Ledecky, I would have cried.

Long story short: We don’t need to look for the next Michael Phelps.

Phelps had a fantastic journey, but all journeys must come to an end, and Phelps has swum his final lap on the world stage. Ledecky is still going strong. If we keep looking back at Phelps, we’ll miss what’s right in front of us.