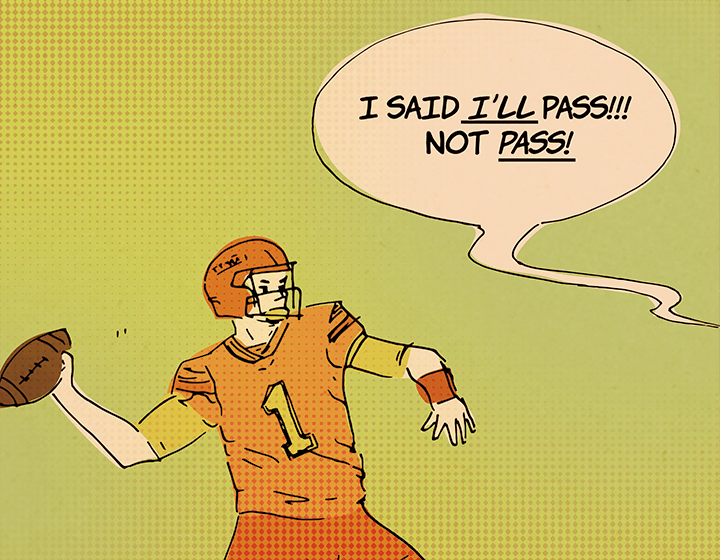 So what’s the big deal with American football? Like, what is everyone cheering for?

While you may be able to see the quarterback throw a 40-yard pass to the wide receiver for a touchdown, there is simply too much to focus on when it comes to football. It’s time for people to get over the hype, and realize football is the most unsatisfying sport to watch because it leaves many of its players out of the limelight.

Football has a lot of moving parts, and as someone watching the game, the only people one usually looks at are the quarterback and the receivers.

With 11 people on each team, there is no way you can focus on all aspects of what’s going on — especially if you are in a packed stadium.

Football is unsatisfying to watch due to its cluttered nature and its neglect of parts of the team — like defense, special teams and kickers, whom are oftentimes overlooked despite their contributions being able to make or break a game.

Now, compare this to basketball. Five people from each team are on the court, and you can see how each person participates. From passes and dribbles to offensive screens, basketball is satisfying to watch because you can see each player closely and can directly see all of the action.

For a slightly larger comparison, we can look at baseball, which has nine players on the field.

In this case, while there are more players who are widely scattered on the field, a person only needs to follow where the baseball is going.

In football, even when someone is on the offensive, there are still defensive elements that the viewer is missing, such as the blockers. Baseball is straightforward in its placements, which allows the audience to witness the action clearly.

If the baseball lands in the outfield, you focus on the outfielder and how each baseman contributes to getting the batter out.

Even though someone may not be focused on all the action like basketball, each person still has equal potential to shine both offensively, as the batter, and defensively, depending on where the ball is hit.

Yet, some may say, “Well, golf isn’t that interesting! How could that be better to watch than football?”

In golf, a person can watch how the golfer putts and drives the ball toward the hole. No one is left out because golf in and of itself is meant to be more reflective and personal compared to football, which leaves many of its players out in the cold.

Keep choosing your fantasy football leagues and arguing about who is the best team, but when it comes to watching it, just change the channel and don’t bother wasting money. Football tickets cost on average the most of any professional athletic event, from $167 to $926, compared to an NBA game that can range from $71 to $176. This is a huge waste of money, considering how little you can focus on as a viewer.

I’m not an American football hater, but let’s just face the facts: No one can pay attention to everything happening in a football game; there’s just too much going on.

Look up the scores the next day and watch a sport that can really get your blood pumping — like basketball season and the rush of March Madness.