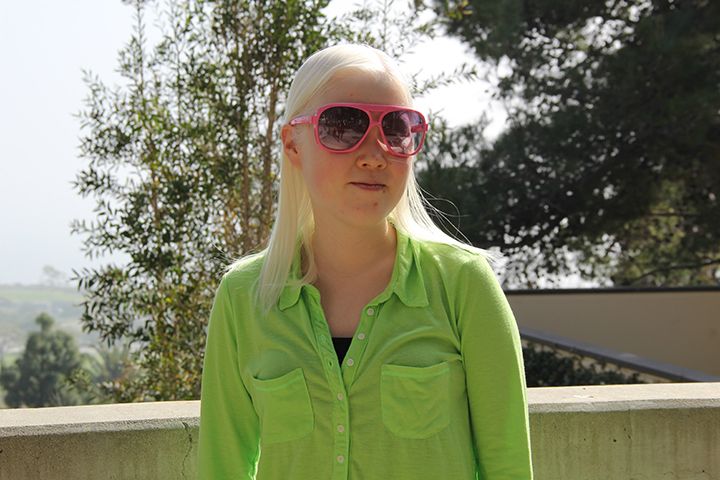 Along with undertaking the expected busy schedule of a college student, junior Hannah Choe also deals with disabilites.

Choe was diagnosed with Albinism. Since she was born she has been visually impaired, which is a side effect of the albinism. She wore glasses from when she was three-years-old to when she was seven-years-old, but eventually the glasses were no help. Now twenty years old, Choe says she has adapted to her conditions.

“Since I have grown up with it all my life,” said Choe. “I don’t know anything else… I’ve just adapted to it.”

To help her see, Choe uses a monocular, which is like a smaller version of a binocular. She carries it around with her everywhere she goes and it helps her to see street signs, classroom whiteboards and other day-to-day objects.

Since her conditions can make class work relatively more difficult to complete, Choe uses the disability services on campus to get the help she needs.

Because of her blindness, it is difficult for Choe to take notes in class. She says that the time it takes for her to use the monocular to see the board and write down what it says is too long for her to gather all the necessary information. For this problem, she notifies the professor on the first day of class of her physical disabilities. Choe says they are helpful.

“One of the big things I love about Pepperdine is that its Disabilities Service has helped so much,” said Choe. “They are very accommodating with everything.”

Choe says her visual impairment does cause some issues because much of her college work is reading-based. It takes her longer to read the material because it causes her to strain her eyes, and she has to take breaks to let her eyes rest.

However, Disabilities Services helps her by finding her textbooks in larger print and she is allotted extra time on her exams, which she takes at the Disability Service office.

Along with the albinism, Choe’s eyes are also very sensitive to the sunlight. She wears sunglasses whenever she is outside and wears a baseball cap and sunscreen if she knows she will be in the sun for an extended amount of time.

Another condition Choe faces is Type 1 diabetes, which she says came from her dad’s side of the family. She has been diagnosed for a few months shy of twelve years and has to take insulin shots and wear a pump on her hip.

“It’s just one little extra thing that I have to be mindful of,” said Choe. “One positive thing is you’re more conscious of what you eat.”

Although albinism and Type 1 diabetes have some disadvantages, Choe also benefits from some positive effects of her conditions.

Choe says she has photographic memory, which is helpful for exams. She also says she has good hearing and although she does not drive she is allowed to have a handicap sign, allowing her to always have closer parking spots.

Outside of school, one of Choe’s biggest passions is volunteering.

For the past eight years, Choe has volunteered for Donate Life, an organization that advocates organ tissue donations.

What initiated the connection between Choe and the organization was the death of her five-year-old sister in 2006. She passed away at a pool party because of a water related accident. The tissues of her cornea were able to restore the sight of two people.

After her sister’s accident, the Choe family started volunteering at Donate Life and they now speak for the organization and represent the donor family by sharing their story. Choe has been trained as an ambassador for Donate Life, which means she talks to the media about her story and how she is connected to the organization. She speaks fondly of her time spent there.

“It’s hard to believe it’s already been eight years,” said Choe. “It [time] has flown by, but it’s been really great volunteering for them.”

Along with volunteering, another one of Choe’s passions is baseball. Although Choe cannot play herself because of her vision, she watches her younger brother, who has been playing for 12 years. Choe says that because her dad is a huge Dodger’s fan, she is also a Dodger’s fan.

Last summer, Choe interned for a summer collegiate baseball team, called Southern California FCA Baseball. Players participated from various colleges in the country including Pepperdine, UCLA, and Dartmouth. The organization was non-profit and she attended games and practices. She said games were almost every day, and although it was a huge time commitment it did not seem that way because she was having so much fun.

Choe is currently a junior at Pepperdine, studying Sports Administration and Non-profit Management. She says her dream job is to someday work for the Dodgers, in any way possible. She says the exact position does not matter as much to her, but she would realistically like to work with one of the foundations that work with the team.