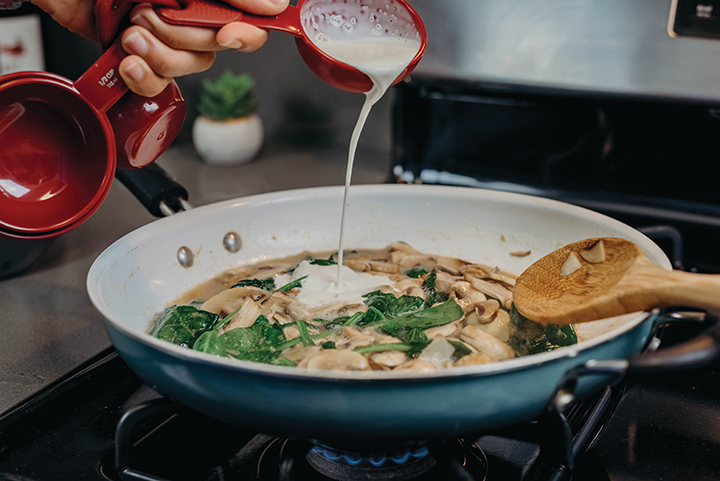 Dishes from various cultures may be made with different foods but they all have one central ingredient in common: community.

“If I had to have one meal before I die I would choose this twice over,” senior Reed Williams said about his mother’s homemade crayfish fondeaux.

Of Cajun and African American descent growing up in Texas, Williams said he has experienced a melting pot of different food cultures but always comes back to this traditional Cajun dish.

“It’s a cheese paste, fondue style, but it has your crayfish, your spinach, your mushrooms, it has shrimp, it has whatever you want in it,” he said.

Holidays are especially centered around food for Williams, who remembers big gatherings with family and friends.

“Thanksgiving and Christmas at the Williams’ household have a lot of cholesterol, I can tell you that,” he said with a laugh. “My mom also makes this macaroni and cheese that will literally clog your arteries the second it touches your tastebuds.”

“My favorite thing to do is take the biscotti right when they come out of the oven and you dip it in coffee … it dissolves a little bit so when you put it in your mouth, it just crumbles,” she said.

Anderson says a major part of family baking is a balance of sticking to the recipe while also knowing when to stray from it to make your dessert unique.

“You use Crisco, sugar, eggs, flour and vanilla, which is the central ingredient, but you always have to go way over the amount that they say to go because it makes it sweeter and better,” she said.

Anderson said these holiday baking sessions have carried on across generations and she doesn’t plan on stopping them now.

“It would be my great grandma, my aunt, my mom and my grandma. The females in the family would always carry on this tradition, so I look forward to doing that with potentially a future daughter,” she said.

The time set aside for cooking is another element to the experience, and in the midst of the modern-day, two-minute-and-30-second microwavable meal, Anderson says the Italian way is much different.

“A lot of the food that you make in the Italian culture takes a long time,” she said,”It’s not an easy, quick process. How can I do this in 30 minutes to an hour? Biscotti takes all day,” she said.

But the Italians don’t seem to mind. Anderson described how the commitment and attention to detail in their cooking translates to their characteristics as a whole.

“Because you have to reserve time for it, I think that speaks to the kind of people that come out of the Italian culture, it’s very hard-working and not afraid to take time on things and make it to the best of their ability,” she said.

On the other hand, junior Elizabeth Hsueh said she prefers the classic, quick egg and tomato Chinese dish that has stuck with her since childhood.

“It’s basically just egg and tomato, there’s onions and if you want to put a little meat in it you can, and you just eat it over rice,” she said.

Although simple in composition, Chinese dishes often include specific foods that represent different elements of wellness in life.

“You’re always supposed to eat fish at Chinese New Year because it represents prosperity and health and happiness for the upcoming year,” she said.

Hsueh said she remembers the family bonding that happened over sharing the different foods everyone would bring during the celebration.

“The food is important but it’s also the community … everyone will spend the day together preparing the food and there’s a strong emphasis on family,” she said.

Whether or not the experimentation ends up fitting your taste, Williams thinks being open to trying new foods with others increases overall understanding of the culture.

“You get to sit down and enjoy it or not enjoy it but at least you’re trying something different … you don’t have to like everything, but it’s the company and people that matter,” he said.