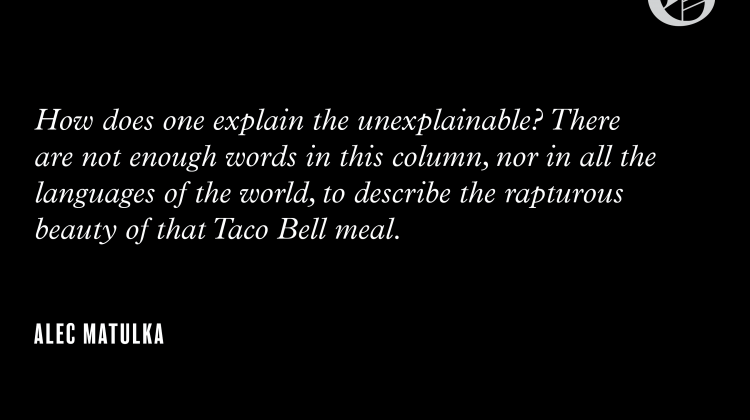 On Monday, Jan. 10, I tested positive for COVID-19. For the next 10 days, I isolated at an off-campus hotel — a ritual that has become all too common for the Pepperdine community.

Recovering from COVID-19 symptoms, being in a hotel room by myself for 10 days and not being able to go outside or attend in-person classes, I struggled to find good news in my life. But life has a funny way of giving you what you need when you need it, even in your lowest moments.

For me, that thing was Taco Bell.

Life in isolation moves slowly. At a certain point, my well of entertainment began to dry up. I finished the book I brought with me. The show I was watching hit a lull. The allure of opening all the cabinets and drawers in the room at the same time became less and less satisfying. Watching birds proved entertaining at first, but around day six, I started to get jealous.

Worst of all, the food had become unbearably monotonous, a fitting symbol of my daily isolation routine. I’d eaten the same margherita flatbread for the past six meals, and I needed something, anything, different.

I’m not an avid DoorDasher — I can count on my fingers the number of times in the past I’ve used the service — but it seemed like the only option. A new experience in isolation is hard to come by, so I took what I could get and re-downloaded the app.

The first night I DoorDashed came on day seven. When I first went onto the app, I was overwhelmed by my choices. I wanted something familiar, convenient and cheap. The two closest fast-food restaurants were Taco Bell and McDonalds. That made the choice fairly obvious.

I ordered a Crunchwrap Supreme, a Veggie Chalupa Cravings Box and a two-pack of Cinnabon Delights, and decided to wash it all down with a medium Mountain Dew Baja Blast. A culinary classic, to say the least. When I heard that fateful knock that meant my feast had arrived at my door, I hastily pulled the food inside and chowed down.

How does one explain the unexplainable? There are not enough words in this column, nor in all the languages of the world, to describe the rapturous beauty of that Taco Bell meal.

As I opened the bag, the unmistakable scent of tortillas and cinnamon flooded the room. The scents and tastes of my Taco Bell meal provided a sense of revitalization in my mundane routine, yet also a sense of familiarity from late-night meals of years past.

I’m not ashamed to admit it: I ate Taco Bell each night for the remainder of my isolation. It was unhealthy, unnecessary and most importantly delicious.

On a usual, non-quarantine night, I cook for myself. I imagine I’ll eat Taco Bell sometime in the future, although I don’t know when or where. It will certainly be an emotional experience, a reminder of a time of uncertainty, sickness, boredom and ultimately hope in the form of two-dollar burritos.

My hope is that, in your times of struggle, whenever and whatever those may be, you find the good news in whatever form it takes. If that seems impossible, and if you’re unsure where to turn, know that there is a Taco Bell nearby.