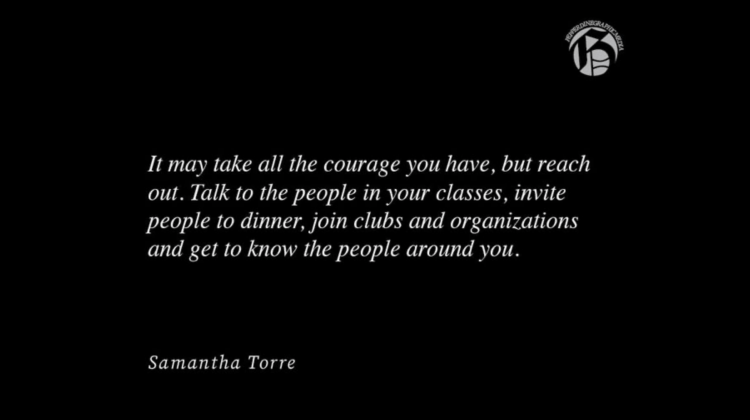 One night, before the semester began, I received a call around 11 p.m..

“Do you want to go to Ralphs Beach around midnight, there’s going to be a meteor shower and tonight is the peak,” my friend asked.

We gathered some blankets and laid out next to the pink house, and the super moon provided more than enough light to see each other. We began to worry the light of the shooting stars would be smothered by both light pollution and the moon.

Then, one after another, meteors flew across the sky in bright streaks.

Lying underneath the stars, staring out at a vast blackness over the ocean, I realized how easy it is to feel lonely, especially at college. Far away from home, adjusting to a new rhythm, it can be incredibly isolating.

But I wasn’t alone. I was lying shoulder to shoulder with some of my closest friends, pointing out some of the brightest stars, squabbling about the amount of sand on the blanket and laughing at each other as we looked at spots too bright to find stars in.

The community I have now didn’t come easy. There were times I looked at a loading Zoom meeting, or sat in a freshly decorated dorm room, missing home and missing friends now over 2,000 miles away. When community like the one I had now would have seemed out of reach.

There was conflict, tears and misunderstandings, but there was also forgiveness, communication and willingness to lend a hand when strengthening the community.

College is a time of transition, where the people you see everyday for years will graduate and move across the country, starting the next chapter of their lives — where a person will go from someone you saw everyday to someone you haven’t seen in years. Knowing this is incredibly terrifying, and sometimes makes me want to curl up in my room and mourn friendships that haven’t even begun.

But that isn’t the answer. The answer is to form those friendships anyway. It may take all the courage you have, but reach out. Talk to the people in your classes, invite people to dinner, join clubs and organizations and get to know the people around you.

The chances are that if you’re feeling a little lonely, the people around you are too.

My time at Pepperdine has included some of the best and worst moments of my life. Cheesy as it sounds, my friends have made the struggles worth it, and the good times shine brighter.

Looking up at the universe above me, I began to think how friends were like stars.

Like stars, some friends will be a steadily burning presence throughout your life. Some friends will fade out of view, but that doesn’t mean they aren’t there. Others — yes, I know it’s a meteor but just stick with me on this metaphor — will streak across your sky, remaining a memory you hold close to your heart.

Other friends will be sitting next to you on the blanket, pointing at the sky and confusing airplanes with shooting stars.