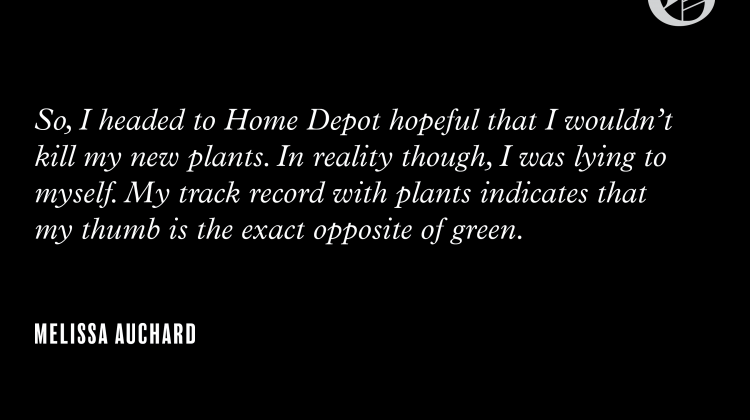 One day I had the sudden inclination to spruce up my on-campus apartment. The living area and kitchen don’t receive much sunlight. The walls are a dark shade of blue, so the space was rather glum.

“Plants,” I thought. “Plants will brighten the space.”

So, I headed to Home Depot hopeful that I wouldn’t kill my new plants. In reality I was lying to myself. My track record with plants indicates that my thumb is the exact opposite of green.

“Maybe if I love them enough they’ll live?” I wondered.

I entered the nursery at Home Depot and faced a confrontation of green — light green, dark green, forest green, lawn green. Some plants were big and tall. Others could fit in the palm of my hand.

I made my way to the little plant section — cheap enough for a college student to afford and small enough not to take up too much of my already limited space.

One plant immediately caught my eye. It was pink! Then another, it stood tall and fluffy. And another, its leaves were striped like a tiger, white and green.

Feeling ecstatic, at my apartment I potted my new plants in colorful pots. I arranged them in their proper locations — two on the coffee table, two on the dining table and two on the kitchen counter. Satisfied, I left my plants to their own devices.

For the next few weeks I watered the plants whenever the soil felt dry. I tried to ensure they had enough indirect sunlight, but somehow they were slowly withering away.

“You need to name them,” my best friend Holley said. “ If you want them to survive, you need to have a relationship with the plants.”

This same friend says bananas have feelings though, not sure I can trust her opinion.

I named my plants anyway — Esmerelda, Ferguson, Suzie, Bethel, Mr. Gibbs and Fluella. I don’t think they liked their names though because their leaves continued to turn brown and dry; brittle, they’d fall off.

Unlike I’d hoped, my thumb looked less green than ever. My plants were dying, past the point of return, except for one. One plant was still thriving, Fluella.

Fluella stood tall and proud. Her stems were firmly planted in moist soil. Her green leaves were healthy and vibrant.

The other plants were declared unresponsive Feb. 25 at 10 a.m., fortunately for Fluella. She received all the attention after her siblings’ passing.

To this day Fluella is thriving. She loves all the attention I give her. I think maybe I’m giving her enough love.