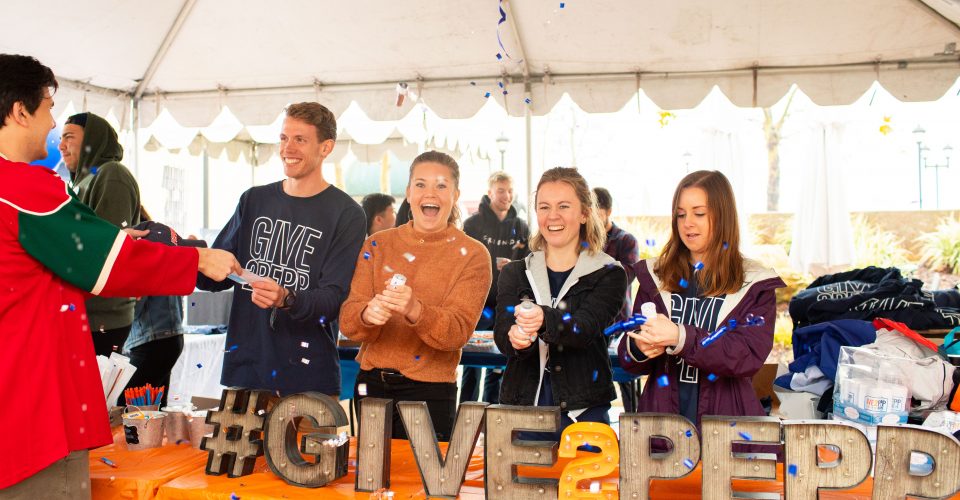 Despite a persistent rainstorm throughout the better part of the event, Pepperdine’s third annual Give2Pepp giving campaign generated more than 3,000 supporters once again.

For the 2019 version of Give2Pepp, the Pepperdine Advancement office and the Student Philanthropy Council joined forces to add several new giving competitions on the Malibu campus and a new “Champions” campaign on social media.

“It brought me such happiness even to see, in the middle of a rainy day, there is that Pepperdine pride and that spirit of wanting to show their blue and orange,” said Angela Kappus, assistant director of The Pepperdine Fund and director of Give2Pepp. 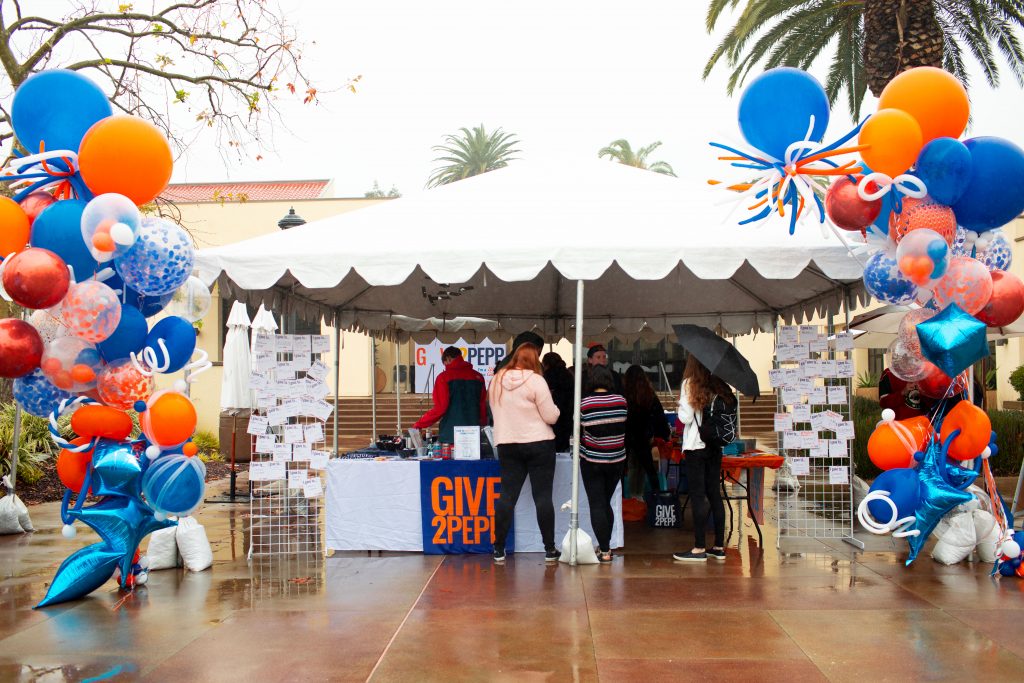 The Student Philanthropy Council’s display in a rain-soaked Mullin Town Square was unfazed by the storm on March 6. (Photo by Delaney Milton)

The 37-hour giving event, in honor of Pepperdine’s founding in 1937, began at 11 a.m. on March 5 and continued throughout March 6, a very rainy day in Malibu. The university sponsored events at the Calabasas, West Los Angeles and Malibu campuses, including four different events at the Malibu campus.

“Maybe we had less foot traffic on main campus because of the rain, but the people who were there were all really positive and excited to come up to us, and excited to take part in the activities that we did have,” senior Lauren Van Tress, president of the Student Philanthropy Council, said.

The majority of the donors throughout Give2Pepp are reached via email or social media, so much of the event is coordinated virtually, Pepperdine Social Media Manager Mallory Holcomb said.

The Pepperdine Advancement team is still working through the final calculations, but the total donor count for 2019 Give2Pepp is comparable to the 2018 number, according to statistics posted by the Office of Annual Giving.

The Give2Pepp website displays 3,134 donors for the event, just under the final tally of 3,233 donors in 2018, but there are several ways that the number could still increase as the donations are analyzed.

“This number will increase slightly as we finish processing the gifts, primarily because of married alumni and parent donors,” Tierney Anderson, Seaver Class Giving officer for The Pepperdine Fund, wrote in an email.

If two Pepperdine alumni or one Pepperdine parent is married, the spouse is also considered a donor. Additionally, the advancement team continues to match gifts delivered over the mobile payment service Venmo to their donors.

“We had about 700 Venmo gifts, so we’re still having to go through all of those,” Kappus said.

This number is an improvement from 2018, in which 509 donations were given via Venmo.

In total, the Give2Pepp website shows a figure close to $360,000 for the total amount of money raised in the 37-hour period, which is lower than the 2018 tally of more than $400,000, but Kappus and her team emphasize that the day is focused on the donor count, not the dollar count.

“Once we add everything in, we’re very happy with the results,” Kappus said.

Several weeks prior to the event, Holcomb’s team began posting countdown videos for the event, featuring “Champions.” These new support videos, coming in from donors around the world, continued to be posted on Pepperdine accounts throughout the event.

“Social media, that’s how you share things now,” Kappus said. “We each have our own network. Pepperdine can’t reach every single person.”

Champions included consecutive Give2Pepp donors from the first two years of the event and others nominated by advancement officers and alumni groups.

“We were talking about how to show that this day isn’t just about the institution asking for money, but really this is about everyone’s participation and how this is a global day, and that alumni are really excited about the day,” Holcomb said. “The best way we could think of to do that was to get our alumni to be the face of the campaign.”

Though Holcomb, her social media coordinator and one intern spearheaded the Facebook, Twitter and Instagram campaigns on the school’s accounts, the various departments and groups at Pepperdine added their own efforts.

For example, the Religion and Philosophy Division held a competition between individual class sections and gave out burritos from Lily’s Malibu to student donors.

“With Religion and Philosophy, you can see that Dean [Daniel Rodriguez] was so behind Give2Pepp and so excited to make it happen, so everything they did with the Lily’s burritos and the class competitions was them taking that initiative and getting that support for their division, which was really fun to see,” Anderson said.

The Payson Library held a similar event March 6, with a table encouraging students to give. As a result, gifts to the library increased nearly tenfold from last year, Holcomb said.

The Seaver-based Student Philanthropy Council (SPC) orchestrated competitions between athletic teams, first-year halls and International Programs to see which groups could generate the most donors. 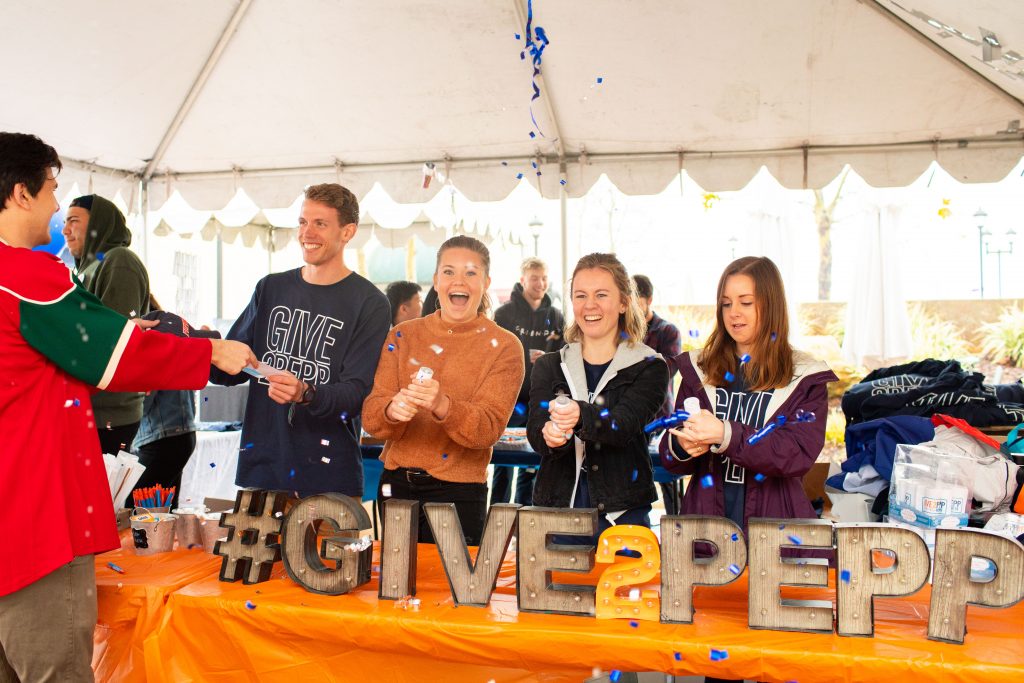 Pepperdine students (from left) Jalen Frantal, Emma Engelland, Lauren Van Tress and Hannah Price are all smiles on the morning of March 6. Frantal is an SPC member and Van Tress is SPC president. (Photo by Delaney Milton)

The global representation and support of the International Programs is key for Give2Pepp’s goal of generating student support, Kappus said.

“We had the [Washington] D.C. and Florence [international] programs each hit 100 percent, in large part thanks to the Student Philanthropy Council reps who were there encouraging and educating their peers to give in the house,” Anderson said.

In athletics, Men’s Water Polo earned the most donors and supporters, but three other teams achieved a notable feat.

Miller (male house) and Crocker (female house) were the winners in the first-year hall competition, producing the highest percentage of residents to give back and receiving $1,000 for a house event.

Additionally, the university itself held a competition between the individual schools and divisions.

“We had a university-wide alumni challenge as well as a student challenge,” Kappus said. “Basically all of the schools [competed] against each other to see who can increase their participation the most from last year.”

Kappus’ team continues to calculate the results of this competition.

The Pepperdine Ambassadors Council kicked off the festivities March 5 with a convocation event about the importance of giving.

Pepperdine held events at the School of Law and Drescher Graduate Campus, while SPC coordinated the Seaver College events at the Center for Communication and Business (CCB) and Mullin Town Square.

“We started on March 5 at the CCB, and we realized that that was a population that we hadn’t really reached before, because a lot of Business and Accounting students have internships on Wednesdays, so they weren’t really around main campus on [March 6],” Van Tress said.

The rainstorm began the morning of March 6, but SPC members met at 6:30 a.m. and chose to move forward with the event on main campus to generate excitement for the day. The event included coffee and donuts in the morning, tacos in the afternoon and display boards where donors could express their pride for their Pepperdine passion. 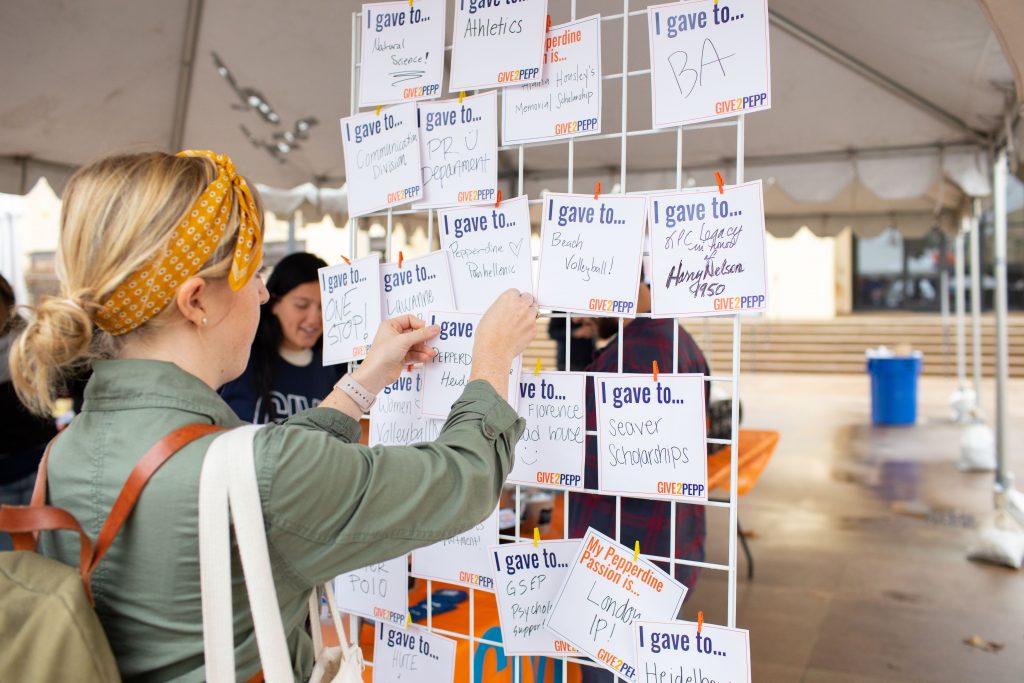 “Students are involved in so many different things, and they want to get so specific with their gift, and they can, which is so neat,” Holcomb said.

Though Kappus, Anderson, Holcomb and Van Tress are already in the process of analyzing what worked well and did not go well in preparation for the 2020 version of Give2Pepp, those still wishing to give need not wait until March 2020. Students, alumni, family and friends can give to Pepperdine at any time online, via phone, check, Venmo (@Give2Pepp) or via Electronic Fund Transfer (EFT).

However, why give to an institution in which one already has so much invested?

“Pepperdine is a non-profit,” Van Tress said. “Tuition only goes so far in covering the costs. There are so many different things running here on campus, and those require funding and participation and involvement.”

Additionally, alumni donorship makes up 5 percent of the U.S. News and World Report rankings of best colleges and universities. This donorship is measured in terms of amount of donors, not amount of dollars, so Give2Pepp seeks to educate students about the importance of giving back.

“The reason that it’s so important for alumni to give back, and the reason that the U.S. News and World Report takes it into consideration in rankings, is because when alumni give back, it shows that they value their degree,” Holcomb said. “It’s a cycle. When you give, you can help increase your ranking, which therefore gives more value to your degree.” 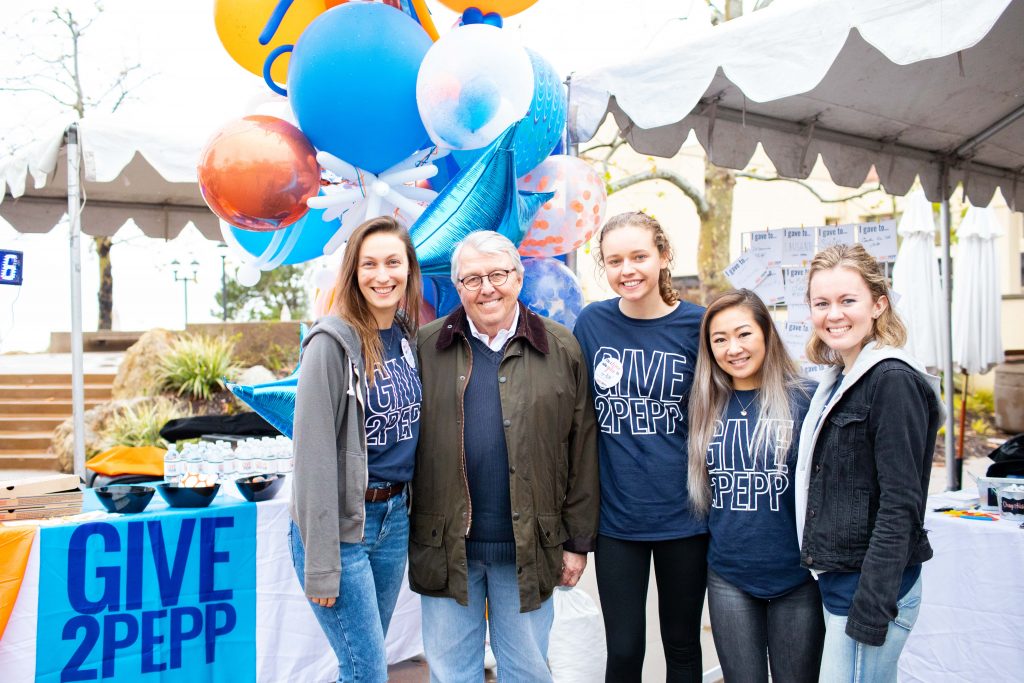 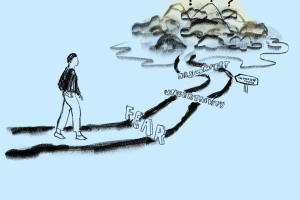 Art by Ally ArmstrongEntering the twelfth week of the semester, students have a strong sense of their routines. In the predictable...
Copyright 2013 Jupiter Premium Magazine Theme
Back to top