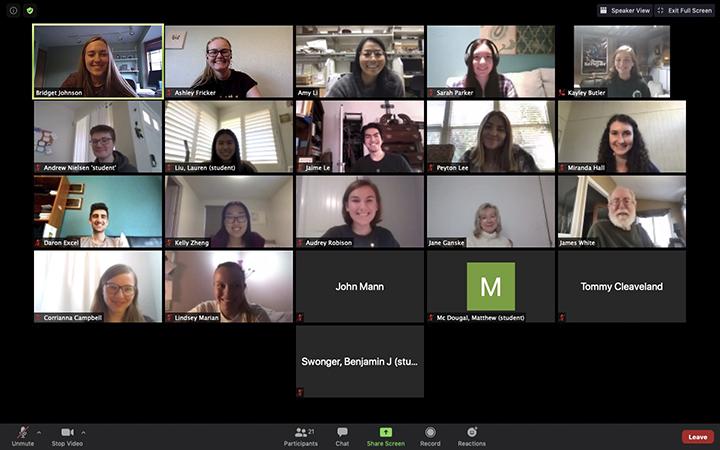 Students attend the Chemistry Club’s virtual November General Meeting on Nov. 13, 2020. This meeting, which featured female alumni from the natural sciences, was one way the Chemistry Club took advantage of the online semester. Photo courtesy of Bridget Johnson

Students in Pepperdine’s STEM majors continue to adjust to virtual instruction and interaction in their classes and clubs. As students have become more comfortable with the format, they are thinking of their futures.

A virtual semester for science, technology, engineering and math-related majors lacks necessary hands-on elements — such as labs and peer collaboration — which can leave some students feeling removed from Pepperdine and unsure about their career paths.

“I think that it can be hard for students that don’t really know what they want to do when they’re not really getting the type of exposure that they would get if we were in person,” said junior Chemistry major and President of the Chemistry Club, Bridget Johnson.

Students Use Their Resources to Adjust

STEM majors like Johnson adjust by virtually taking stock of their resources and creating a study plan that works best for them.

Johnson said that for STEM students, labs are essential. However, a virtual setting can make it challenging to take full advantage of lab classes.

While she was able to move some lab classes to her senior year, Johnson had to take her physical chemistry lab online. Johnson said online labs typically entail working on less sophisticated versions of experiments and receiving data from the professor to analyze.

“I think that having to take the lab online, I didn’t get maybe as much exposure to some of the lab techniques and things that would be really prevalent if I did end up going into that,” Johnson said.

Sophomore Physics major Audrey Robinson said she uses recorded lectures as a tool to study and also takes advantage of outside resources such as lectures on other university websites, including the Massachusetts Institute of Technology.

Robinson said she had to get used to calling or texting her professors, instead of attending office hours.

“I had to take a lot more initiative, which is a good skill,” Robinson said. “I’ve been in shambles because I would always put off going or setting something up. I felt uncomfortable about it sometimes — I don’t want to be a burden — but I had to get over that.”

It can be harder to study or remain engaged with STEM material while virtual, Robinson said. Professors are willing to work with and help students with this challenge, Robinson said, by continuing to offer office hours, review sessions and tutoring despite the remote setting.

Preparing for the Workplace

Micheal Garas is a second-year graduate student at Pepperdine’s Graziadio Business School and president of the Emerging Technologies Association. Garas said while being in person is definitely preferable, he also recognizes the benefits of online school in a post-COVID-19 world.

“I think that learning how to be successful in a remote format is going to be more valuable for us as students in the long term because that’s the way the workforce is shifting,” Garas said.

To assist students with the process of entering a changing workforce, STEM clubs, such as the Chemistry Club, took the opportunity to give its members a chance to connect with Pepperdine alumni, Johnson said.

“It was awesome to be able to have them back in a more casual setting for networking and socializing and just hearing an update as to how their time at Pepperdine has shaped whatever path they’ve chosen to pursue with their chemistry degree,” Johnson said.

Looking back on fall 2020, Johnson said she was happy with how she structured the Chemistry Club to utilize a completely online semester to the fullest. The remote nature of fall 2020 gave the club an opportunity to host more alumni-based events than in previous years.

“The plus side is it’s very easy to get people to come and talk on Zoom, just because of the convenience,” Robinson, who is the president of the Physics/Engineering Club, said. “It’s not like you don’t have to drive anywhere; there’s no travel, you can do it at any time.”

A series of events that takes advantage of this convenience is the Chemistry Club’s scientific literature readings created by Johnson and led by class of 2018 alumnus Christian Sanchez. Every week, Sanchez chooses a scientific article for the group to read. Johnson said she hopes to both expand this series and increase interaction between students and alumni as a whole in the upcoming semester.

“We try to do more networking and career-building in a time when a lot of people aren’t getting all the opportunities that they want in-person, maybe to be able to make new connections and to meet alumni who are a little bit further on in their journey than current students,” Johnson said.

Garas said while he wants to keep club members involved, he also does not want to overwhelm students with more screen time.

“I just think the accumulation of how you’re always on your computer, whether you’re in class or whether you’re completing assignments for class, has been the part, at least on my end, that’s contributed to a lot of Zoom fatigue,” Garas said.

To combat this fatigue, Garas uses software like Asana to schedule both synchronous and asynchronous meetings. Garas said he wants to find a method of communication that achieves a balance between keeping everyone on track while being aware of the hours spent on the computer.

Johnson said she struggled with the lack of opportunity for a greater sense of community within the Chemistry Department as a whole.

“I really miss that in-person element of, ‘oh, here’s like the small Chemistry Department and we’re all friends and we all know each other and we’re academic peers, but we’re also socially we gel really well,'” Johnson said. “And so not having that took some of the more fun elements of being a Chemistry major out of the equation.”

Robinson said a goal of hers was to retain as many first-years as possible. To do so, the Physics/Engineering Club started mentorship pairings to encourage students to talk to one another and offer help to younger students.

Robinson said she is happy with the high retention rate thus far and hopes to continue providing resources for underclassmen so they can be successful in the future.