Freshman Walks On to Basketball Team and Tiktok Fame 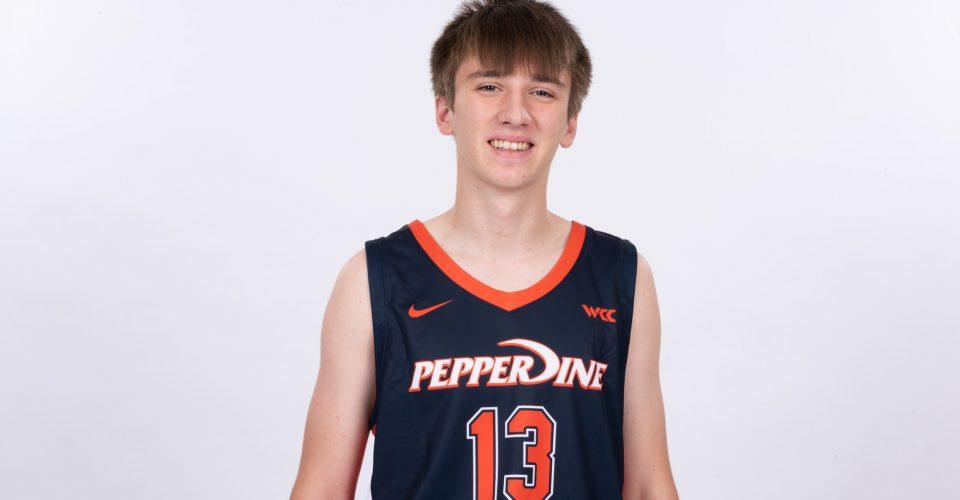 Freshman guard Malachy Caffrey smiles in a Pepperdine Men’s Basketball photo shoot Nov. 1. Caffrey, who is from Yakima, Wash., said it was his goal to play Division I basketball.

A Pepperdine Men’s Basketball team walk-on, Caffrey said he has grown up with basketball.

“[Basketball has] always been a huge part of everything, like we’re in a gym, probably five out of seven days at least — and that’s on a slow week,” Caffrey said.

Caffrey, who is from Yakima, Wash., played junior varsity basketball at West Valley High School before transferring and swinging up to the varsity team at La Salle High School. He also played on a club team coached by his dad throughout high school.

During his senior year, Caffrey said he didn’t have any scholarship offers to play college basketball. He began the recruiting process late, deciding to send his highlight tape to various Division I colleges in the United States.

“We were just kind of, you know, just casting a net out there, to see what we might be able to get,” Caffrey said.

The University of Puget Sound and Whitman College, both Division III colleges, offered Caffrey a spot on their rosters. Although he received scholarships from those schools and would have been closer to home, Caffrey said the offer from Pepperdine changed everything.

“I knew I’d play a lot [at other colleges], but then this opportunity came up and we kind of couldn’t pass on it,” Caffrey said.

Other things about Pepperdine also aligned with Caffrey’s goals. Caffrey said he plans to declare as a Sports Medicine or Sport Administration major because of his passion for sports, and some schools he looked at did not offer these programs.

“Sports have been such a big part of my life that I feel like I need to stay attached, but that was a big part in choosing [Pepperdine],” Caffrey said.

Caffrey also said he appreciated Pepperdine’s academics and knew he wanted to go to college in Southern California.

“This seemed like a perfect mix of a high level of basketball and also a top 50 school, or somewhere around there,” Caffrey said. “So that was when we were like, ‘This is good — we gotta try this, at least.’”

Due to COVID-19, Caffrey was unable to tour the Malibu campus or play basketball in front of Pepperdine’s coaches. He said he accepted Pepperdine’s trial offer in May and moved to Malibu to work out and practice with the team.

On Oct. 30, Caffrey’s birthday, he said the team had just finished a film session when one of the coaches played a video of him practicing. Head Coach Lorenzo Romar talked about how hard Caffrey had practiced while not knowing if he was on the team, and then gave him a pair of shoes, welcomed him to the official roster and told him happy birthday.

“I was not expecting it at all,” Caffrey said. “Obviously, once I heard it, I was super happy and it was kinda a big moment because I’ve been working towards that in my whole life as far as basketball, you know, and that was the moment where it kind of happened.”

Caffrey said he achieved his long-time goal of getting on a Division I basketball roster, something he saw coincidentally reflected in his number. 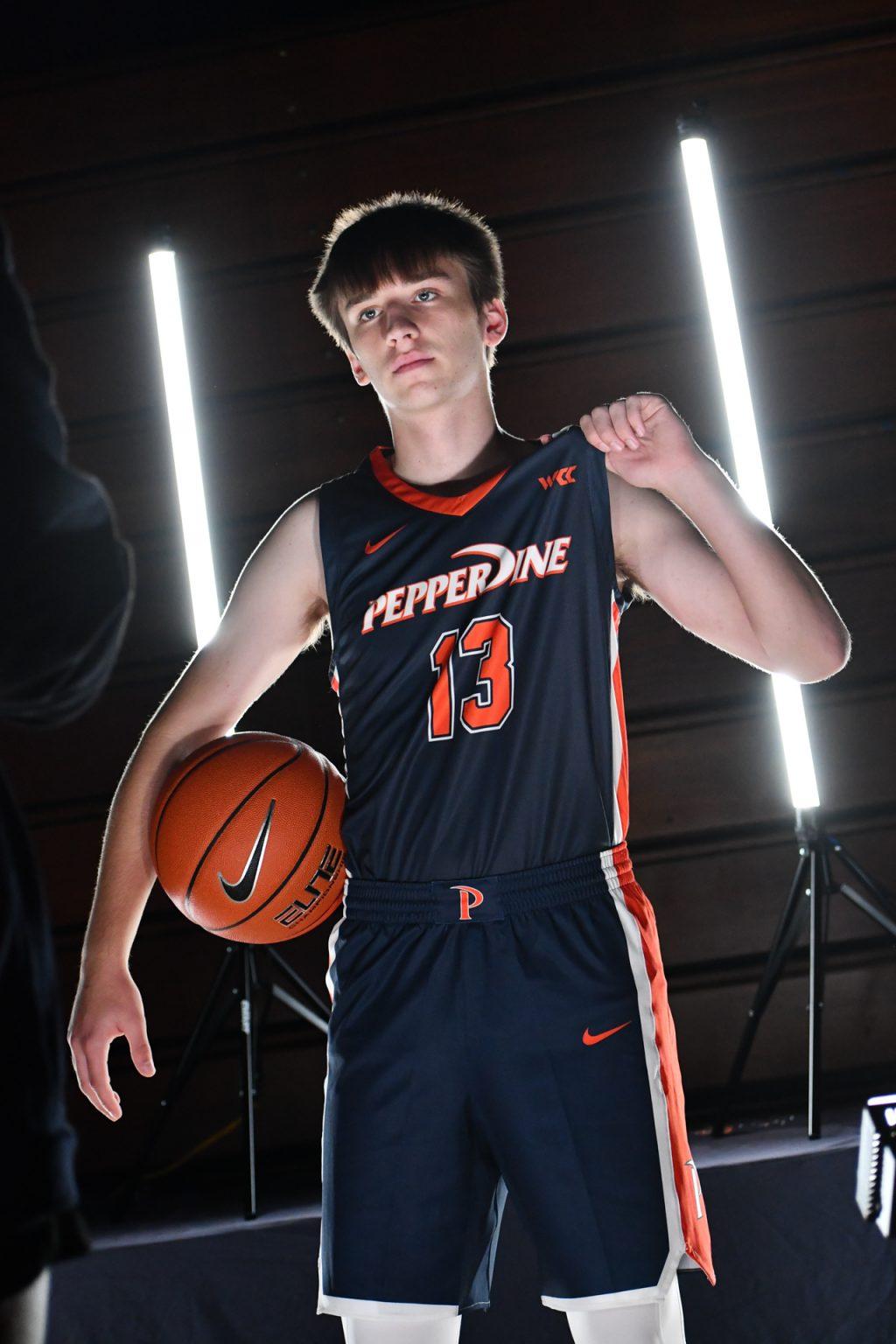 Caffrey pulls his jersey while posing with a basketball Nov. 1. Head Coach Lorenzo Romar officially offered Caffrey a spot on the roster Oct. 30, which was Caffrey's birthday.

Getting a spot on the roster didn’t change Caffrey’s mindset, he said. Before, he wanted to earn a spot on the team and now said he believes “there’s still more to fight for,” including playing time.

Caffrey got on the court for the first time Nov. 25, in the final minute of a game against UC Irvine.

“Obviously, I felt pretty good about myself knowing that I made it, like, I’m like, I’m here Division 1,” Caffrey said. “That’s the highest level of basketball but as far as practices and stuff like that, that was all the same. I still went to lift and still practice every day. So not that much changed, honestly.”

Caffrey’s relationship with his teammates also did not change, he said. They were close while he was on a trial basis and they were all “super supportive and super happy” for him.

“I had already had a connection with them and so I think that probably strengthened it, obviously, because it’s like, ‘Oh, you’re part of us for sure now,’” Caffrey said.

Before getting a spot on the roster, Caffrey said he worked out with senior guard Colbey Ross, which meant a lot to him.

“He just put me through a little workout and I’m a freshman walk-on, not even on the team, and one of the best players in college basketball is going to come give me a little workout like that,” Caffrey said. “That was super cool — even before anybody even knew if I was on that team.”

Since then, Caffrey’s strengthened connections with his teammates are seen in junior guard Jay Yoon’s recent viral TikTok. The video, posted Mar. 13, features Yoon asking various athletes and coaches which athlete they would not want their daughter to date. Almost everybody answers Caffrey, who then makes a light-hearted appearance at the end of the video.

Caffrey said everybody knew the video would be funny, but they didn’t expect it to go viral. As of April 28, the video has 8.1 million views on TikTok.

“It was just funny because I hadn’t had a haircut since I’d gotten to campus and I was not the person that anyone was expecting to see at the end,” Caffrey said. “That’s the only reason it was funny, you can see that in the comments. Everyone’s like, ‘Oh, I was not expecting him.’”

Posting the video and seeing the reaction was a bonding experience for the team, Caffrey said.

“Honestly, it was just funny,” Caffrey said. “It was kind of cool to see how many notifications and whatnot I was getting, and I’m still getting them today. Every once in a while, someone will go through my page and like or comment something.”

While he is especially close with Yoon and freshman forward Kendall Munson, Caffrey said he has formed strong friendships with all his teammates. Munson, who was Caffrey’s roommate, agreed.

Caffrey plans on attending a Pepperdine graduate program after graduating from Seaver College. With the two possible majors he is considering, Caffrey said he is interested in being a physical trainer or a manager of a sports team.

Caffrey’s ultimate goal while at Pepperdine is to earn a scholarship on the team, even though that does not happen frequently.

“With that goal in mind, I motivate myself to work super hard in the summer and just always be trying to get better because at some point, like if you get really, really good, I guess they could offer you [a scholarship], Caffrey said. “There’s always a possibility.” 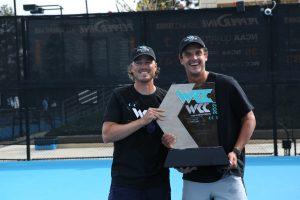