Empowerment is the name of the game for freshman Business major Joshua Gray, who started and runs his own non-profit organization called Foundation FLY, dedicated to providing encouragement and inspirational materials to teens in his hometown of Las Vegas, Nev. Last March, Gray started putting together his organization with its mission to provide an outlet for positive messages aimed at students ages 8 to 18. 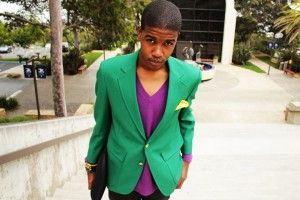 “I really just want to encourage and uplift teens and let them know that they have a future and they can achieve their dreams,” Gray said.

Foundation FLY works through three programs and focuses on three issues facing students.  First, the organization produces empowerment cards and other inspirational materials they distribute at schools and youth events. The second program, known as FLY Read, goes to elementary schools and reads inspirational stories, written by Gray himself.

“I tried to put a lot of my own experiences into the stories to connect with the kids,” Gray said.

“Cyber-bullying is a big thing now, and that’s what I want the social media side to address,” Gray said.

Using the Las Vegas schools’ trimester system, Gray decided to focus each third of the school year on a different area of empowerment. To start the school year, the organization stresses educational achievement. Continuing in the second trimester, the emphasis is on style, encouraging kids to find self-confidence in their own tastes and life decisions. The theme of the third trimester, toward the end of the year, is that of goals and empowering students to dream big, and to find success in accomplishment.

Together, Gray hopes these will help to inspire teens and lead to increased self-betterment, higher self-confidence and decreased bullying.

“I was bullied as a teen — I’ve been there, and kids need to know that they need to keep going and not give up,” Gray said.

Running a non-profit while living in a different city can be difficult, but Gray believes by focusing on social media and creation of materials, he can keep Foundation FLY running, even while away from home. Once this school year is over, he plans on using the summer to assess the strengths of the organization so far and plan events and operations for the coming year.

“I plan on going to London, so this summer will be important for getting everything set up while I’m gone,” Gray said.

This venture is in its beginning stages now, only halfway through its first year. Gray wants to expand in the coming years, especially after he graduates and can devote himself full-time to its operation. “Right now, it’s a lot of low-key communication. I’d like to expand to mass communication like billboards and larger events.”

A major component of Foundation FLY’s growth and expansion is community involvement, including teachers, administrators and church and community leaders.

“I’m definitely learning about ways to change for next year and how to better impact the community,” Gray said. “It’s low-key right now, but in the coming years I want to expand and get even more of the community involved.”

Gray especially hopes to get more participation from the actual students being helped by the programs.

“As you grow up, you get out of the loop of what it’s like to be a teen, so it’s important to keep teens involved inspiring other teens,” Gray said.

Gray is majoring in business administration to gain the skills necessary for running a large non-profit organization. Gray plans on using his skills to create even more ways to reach kids and grow Foundation FLY to the point where it can open new operations in Los Angeles before moving to other areas of the west coast, and then going national. Gray wants to be able to someday turn his organization into a media empire of inspirational books, music and videos available to a wide audience.

“I want to expand this to the heights that God has planned and have faith that it can soar,” Gray said.