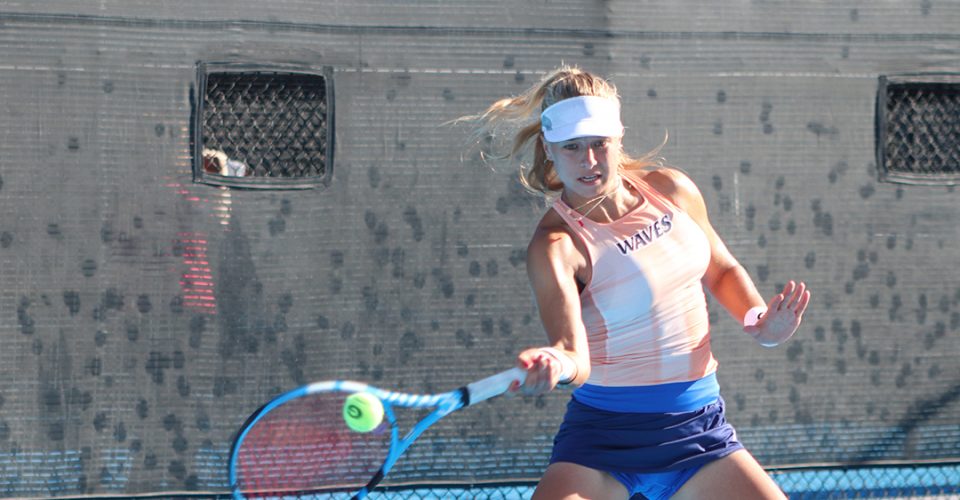 With her first championship under her belt, UTR/ITA Tennis Player of the Month senior Ashley Lahey said she set out to get her second as well as inspire her teammates to start out strong in their first competition of the season.

“The first tournament carried over to this one,” Head Coach Per Nilsson said. “When she feels good and nothing’s bothering her, then she’s really good, so I wasn’t surprised that she was playing well this week, but I knew she had a tough match today against Jessica [Failla].”

Fourteenth-ranked Lahey flew through the first two rounds of single play, defeating the University of North Carolina’s Alexandra Sanford 6-4, 6-2 and Valentina Ivanova of the University of California 6-3, 6-2.

Graduate student Jessica Failla, ranked No. 32, joined Lahey in sweeping her competition in the rounds of 16 and 32. Petra Hule of Florida State University and No. 26 Chiara Lommer of the University of Michigan each posted only one set win in the matches against Failla.

Sophomore Anastasia Iamachkine closed the day with two more wins for the Waves. She easily defeated Giulia Pairone (UM) in the first set, 6-0, but had to fight in the second set to move onto the Round of 16, scraping by 7-5. In another close battle against Cal’s No. 24, Julia Rosenqvist, Iamachkine went to three sets after winning the first 7-6(5) and losing the second 5-7. Iamachkine won the marginally-close third set, 6-4, and also a trip to the quarterfinals.

The first opportunity freshman Lisa Zarr had to compete in this tournament was doubles with Lahey. The duo failed to stop FSU’s Sasha Hills and Petra Hule, who beat them 6-4.

The No. 9 doubles team consisting of Failla and Iamachkine faced the second doubles defeat of the day, 7-5, from Vivian Wolff and Lea Ma of the University of Georgia.

The doubles team flipped the script for the next day of play with victories in their respective matches. Lahey and Zarr beat Christina Rosca and Amanda Meyer of Vanderbilt, 6-3, while Failla and Iamchkine scraped by a 6-4 victory over Kelly Chen and Margaryta Bilokin from Duke.

After being placed into the singles Orange Bracket, Lahey and Failla safely secured their spots in the semifinals. UGA’s Wolff and No. 6 Michaela Gordon of Stanford could accumulate only five points each against their competition, 6-4, 6-1 and 6-2, 6-3, respectively.

The Waves faced their first singles defeat with Iamachkine struggling to close the gap against UGA’s No. 13 Marta Gonzalez, losing 6-4 in both sets. Gonzalez faced Failla in the semifinals the following day.

In the Blue Bracket, Zarr grappled with FSU’s Nandini Das for the victory, falling 3-6 in the first set but powering back with 7-6(4) and 6-2 wins.

Doubles play concluded with two 6-4 victories over Elena Christofi and Ma of UGA and UM’s Alyvia Jones and Andrea Cerdan.

In the semifinals, Lahey faced a bit of push-back from her opponent, No. 22 Solymar Colling from the University of San Diego. After losing the first two games in the first set, Lahey went on a four-set win streak and only gave up one more loss to Colling.

“I was going to try to hit it more to her back end because her fronthand is such a weapon,” Lahey said. “So I tried to just get the return directed a little bit to the backhand side because then I could start the point out with a weaker shot.” 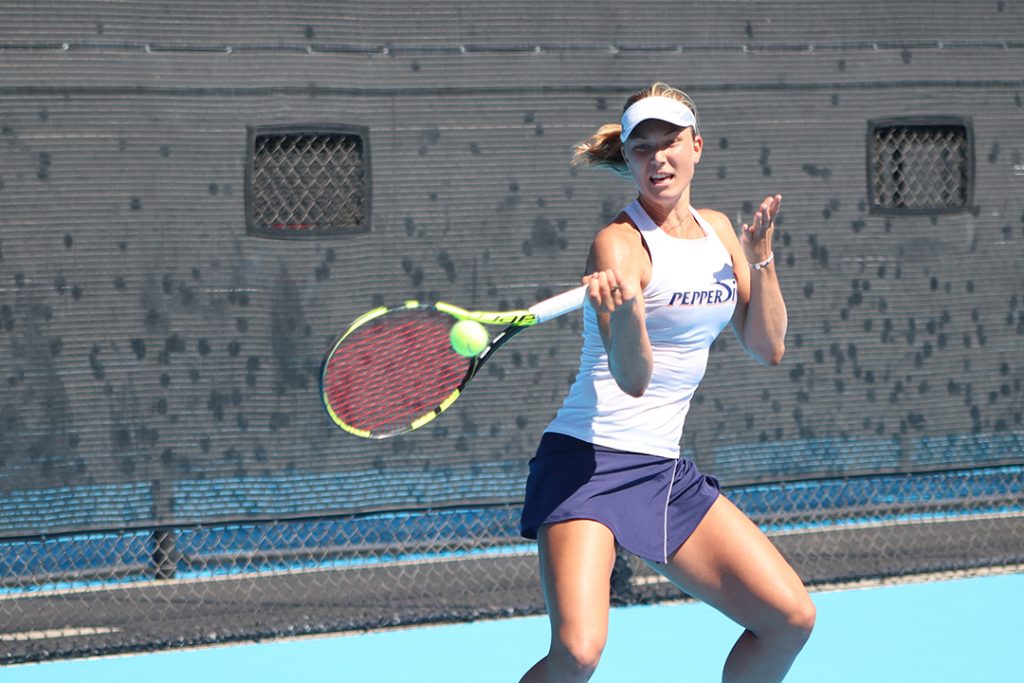 Ashley Lahey drives her racquet into the ball in the Orange Bracket Championship match.

Lahey quickly capitalized on her initial defeat of Colling, securing a 6-2 victory and the first Waves ticket to the final match.

On the opposite side of the bracket, Failla met up with UGA’s Gonzalez. Failla came out with a bang, squashing Gonzalez in the first set, 6-0. After being down 3-5, Failla won three sets in a row to narrow the margin to 6-5. To satisfy the two-set lead rule, the 12th set would either see Failla win the match or lead to at least two more sets.

“I just focused on being really aggressive, trying to hit my shots and dictate,” Failla said. 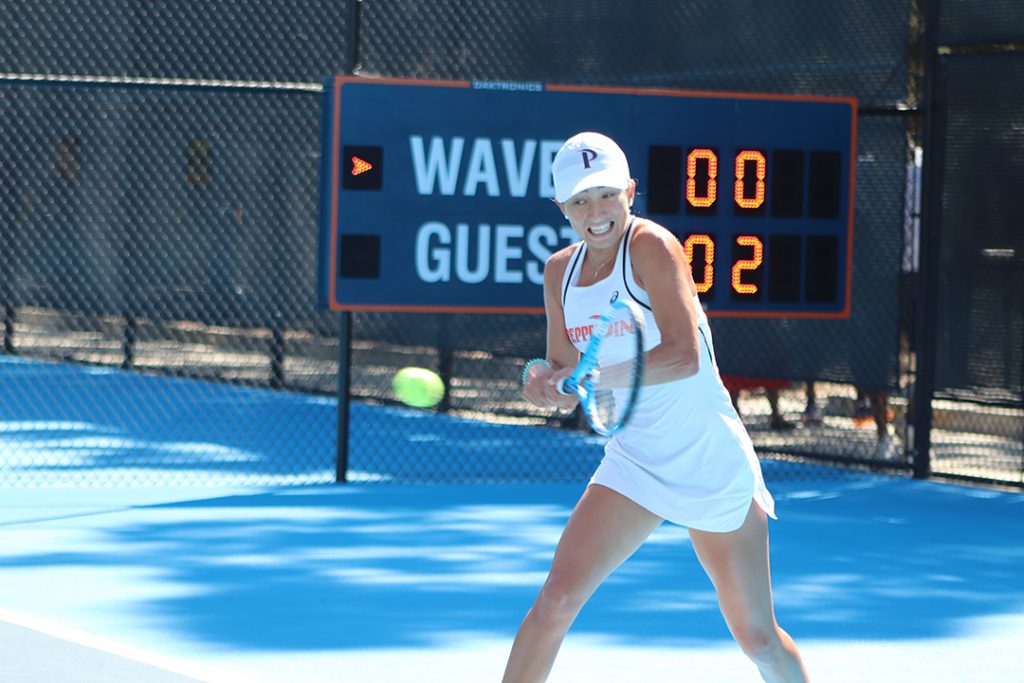 Failla and Gonzalez both fought tooth and nail, never letting the other get more than a point ahead. A strike to the right corner by Failla ended the 7-5 set, sending her to compete for the championship against Lahey.

“I thought of my second serve,” Failla said. “I just told myself, ‘You’ve done this so many times, you have practiced so much, you can do this.’ Once the point started, I just fought as hard as I could, and thankfully, it went my way.”

A third Wave was able to secure a spot in the Blue Bracket finals. Zarr easily overcame the UCLA competition of Annette Goulak, 6-3, 6-2.

The consolation match for Iamachkine resulted in a heavy defeat from Gordon, 6-2, 6-0.

Zarr started off the final day of the tournament facing off with UNC’s Anika Yarlagadda. The two alternated wins for the first four games in the first set. Zarr began to pull away, but Yarlagadda quickly tied the set, 6-all. After being forced into a tie-breaker for the final game, the opponents stayed neck-and-neck with each other.

A swing into the net by Yarlagadda cost her the set.

Although the first set was close, Zarr failed to keep up with Yarlagadda, losing the second set 3-6 and taking the match to a third.

“I just told her to believe in herself,” Assistant Coach Pete Billngham said. “We have really [been] working on coming to the ball and making sure that she’s being aggressive.” 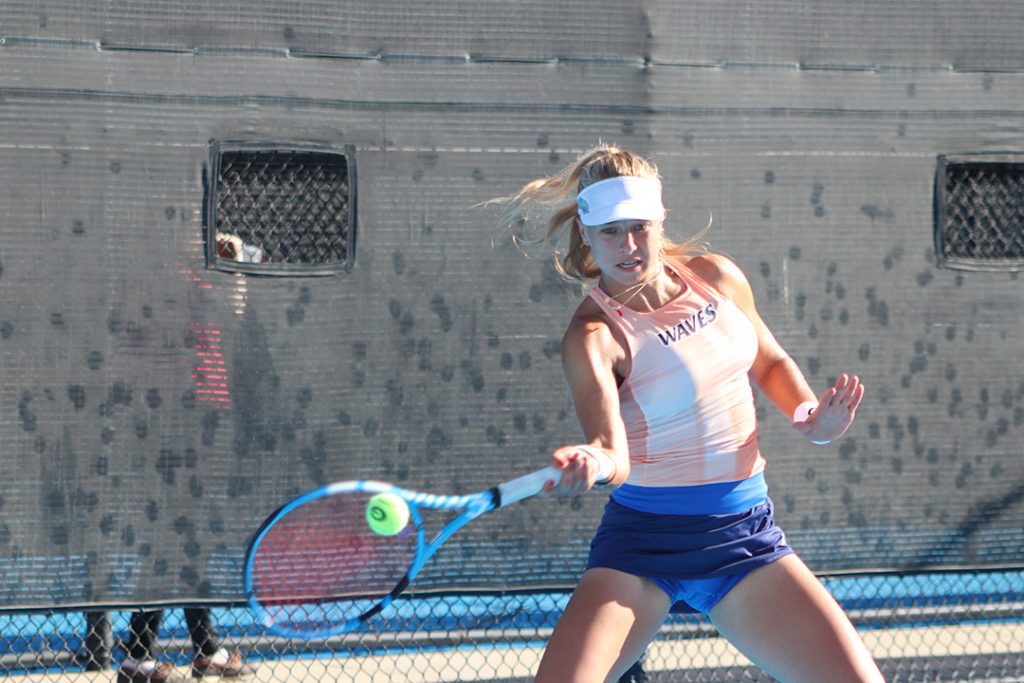 Lisa Zarr uses her upper body to swing into the contact.

Repeating the same pattern as the first set, the Wave battled the Tarheel for the Blue Bracket title in the third. Never being separated for more than two points, Zarr pulled away with a 5-1 run to secure a 10-8 win and a championship in the Blue Bracket.

“I haven’t played tournaments for a while,” Zarr said, “So I’m super pumped to be back and be able to win this tournament here.”

The final match of the tournament was a Pepperdine matchup. Lahey and Failla had played each other three times before, so competing against one another was nothing new.

Failla kicked off the set with a 2-0 run over her teammate.

“I didn’t come in with the right mentality,” Lahey said. “I came in a little bit panicked and uncomfortable. As I got settled into the match, I started to just compete and play against the ball, not the player.”

The games tied one after the other until a 13th-game was the determinate. Lahey got back into the swing of things and easily decided the tie-breaker 6-2. The first set went to Lahey, 7-6(2).

“After the first set, I was able to relax into the match,” Lahey said. “That just made all the difference. I wasn’t really thinking about the score anymore; I was just thinking about playing and having fun and getting better.”

The second set was short and sweet. Failla managed to grab a win in the first game, but Lahey sailed right past to win six games in a row and the Orange Bracket.

Nilsson contributed the team’s success to great practices leading up to the tournament.

“They played really free and … really aggressive,” Nilsson said. “They had to do that to be successful against the players that were here this week.”

The team heads out to Tulsa, Oklahoma, Oct. 9 to 13 for the ITA All-American Championships. 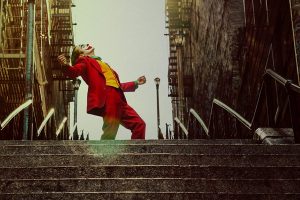