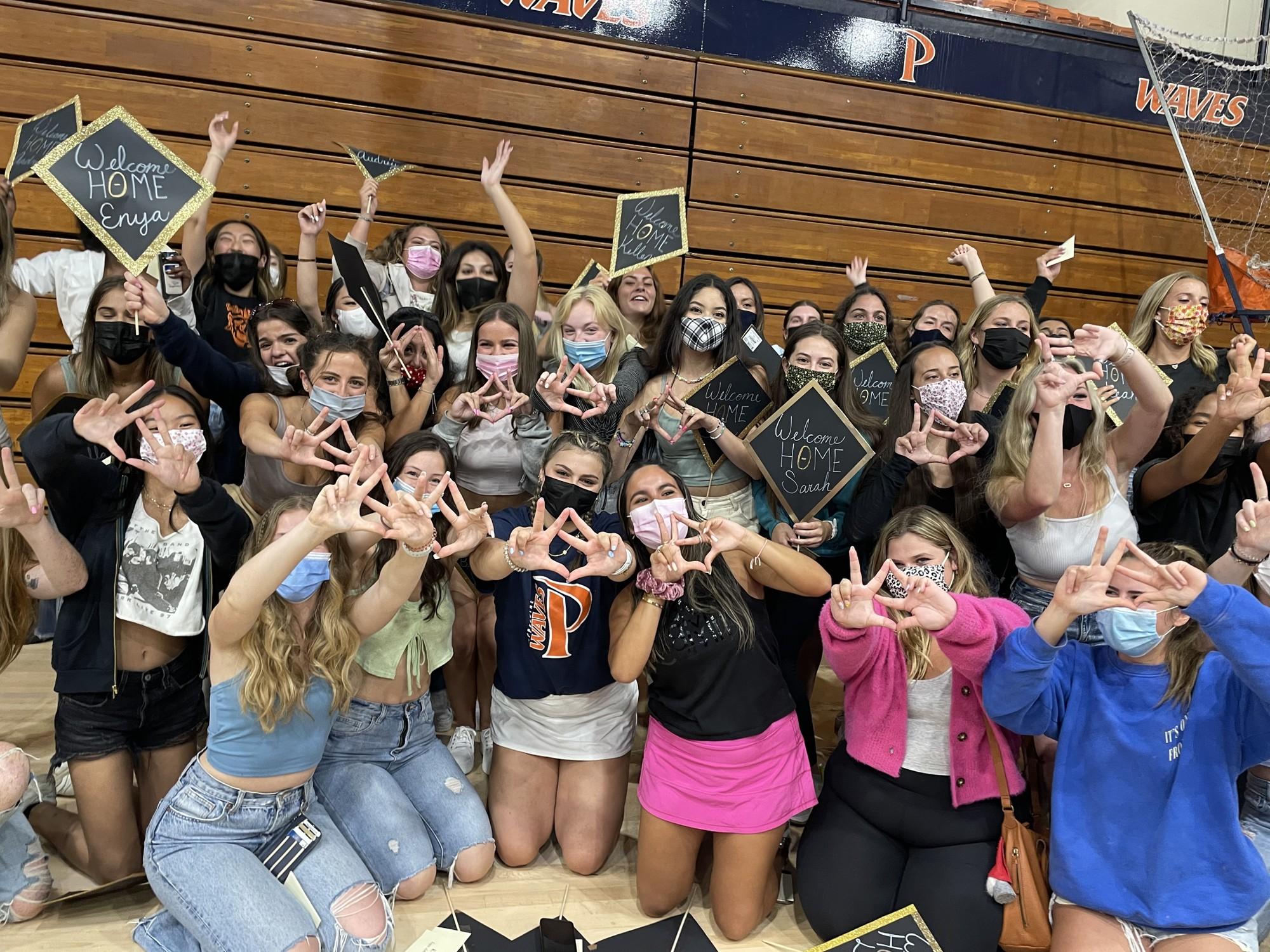 New members of the Kappa Alpha Theta Sorority gather as a group for the first time on bid night. After five days of recruitment, students received a letter naming which sorority, if any, chose them. Photo courtesy of Sasha Amirmokri

In the final two weeks of September, students dressed in their favorite attire — and mask — and put their best foot forward, preparing themselves to open the bid letter to join a fraternity or sorority they had been waiting so long for.

This fall, 566 total students registered for recruitment — the largest number in Pepperdine history, said Allison Green, assistant director of Student Activities. Many students, such as sophomores Sasha Amirmokri and Fabrizio Gamboa, said they waited for campus to open this semester to participate in FSL activities in person.

First-year student Aidan Hulbert said the recruitment process was stressful and at times overwhelming, but what was worth it to him was finding the FSL organization that will welcome him for life.

“My expectations were definitely met,” Hulbert said. “I expected that it would be busy, and I’d be meeting a lot of people, and it definitely was busy, at least for me. But you can make a rush [recruitment] what you want it to be.”

Green said there were a record-breaking 387 potential new members registered for Panhellenic recruitment this semester — a steep incline from the normal range of 270 to 300. In addition, she said this was the best year for retention in sorority recruitment at Pepperdine.

“We really saw a collective PNM attitude of, ‘I want to be involved, I want to find community, I want to be a part of a sorority no matter the letters,'” Green said. “So that was really awesome to see.”

Sorority recruitment was five days long, consisting of an orientation, a seven-hour Zoom open house, two days of sisterhood events where students met each sorority, preference day and bid night. Each of these days required attendance and offered opportunities for students to get to know active members from each sorority, as well as learn what Panhellenic is about, Amirmokri said.

Amirmokri said recruitment was an emotional and tiring experience that did not meet her expectations. After waiting a year to join a sorority, she said she got dropped from five of the seven chapters during recruitment, which she said put a damper on the rest of the recruitment process.

“It was rough that second day because I tried so hard the first day to be me,” Amirmokri said. “It made it really hard to look at the sororities who didn’t want me back in a positive way — and I didn’t expect that. I didn’t expect not getting called back to a sorority affecting me as much as it did.”

Ultimately, Amirmokri got a bid to Kappa Alpha Theta, her top choice of the two that initially chose her after going through sisterhood rounds. She said she felt a huge sense of relief to finally be part of a group that welcomed and accepted her.

When she was a first-year student, Avolio said she felt lost and out of sync with other students during recruitment. This year, Avolio wanted to help potential new members who felt confused navigate the process.

“I wanted to be an outlet to help other people that may have been in a similar situation I was in,” Avolio said.

Avolio said she held concerns with the open house being online. Avolio thought recruitment would kick off on an awkward note and connections would be difficult to forage. Once the night was over, she said she’d been proven wrong and was happy that friendships were made just as they would have been in person.

Green — who refers to herself as the “informal fraternity and sorority adviser” — said with open house being the largest student event of recruitment, the decision was made to hold it over Zoom to avoid over-filling classrooms. The rest of the activities took place outdoors for COVID-19 safety reasons, Green said, but that shift may be permanent after the University saw the benefits of having more open space and fresh air during long days and nights of close-contact activities.

The most difficult part of recruitment, Amirmokri said, was seeing how recruitment negatively impacted some women. Though her experience was hard, she said she is grateful she got a bid in the end.

There is common belief among Pepperdine students that “no sister is left behind,” Amirmokri said. There is not, however, a basis for this idea, Green said, and these unrealistic expectations consistently cause heightened reactions.

“It is probably problematic in general for there to be this verbal thing that gets shared that everyone’s guaranteed a bid,” Green said. “That has never been the case, and that’s not the case.”

Some students decided to begin recruitment only intending to pledge if they get a bid to one specific sorority, Green said. She said because of that, six people were not given invitations. Others were uninvited for various reasons, she said, but that relates to private discussions happening within chapters.

As an adviser for FSL, Green said she follows up with those who are not given bids to let them know of other opportunities to participate in recruitment again or answer any questions they may have about social life at Pepperdine.

“Being in a sorority or fraternity isn’t the only way to have a social network or to have friends,” Green said. “So I want to make sure that they are connected on campus.”

Recruitment for fraternities has fewer rules and requirements compared to sororities, Green said. It is also a 10-day experience, with bids going out on the 11th morning — double the amount of time women spend in recruitment, Green said.

The North American Interfraternity Conference does not have guidelines for fraternity recruitment. For this reason, the University structures the process — which is why attendance for fraternity activities is not required, unlike sororities.

Hulbert said, in his experience, recruitment was flexible enough for everyone to participate in their own ways.

“The free will part of it and not having to have someone trying to keep it structured — for me — I really did like it because I felt I was making it my own rush week,” Hulbert said.

Still, Hulbert said he pushed himself to attend as many activities as possible and felt so depleted at some points in the week after realizing he had not taken any breaks.

“It’s mentally and physically exhausting,” Hulbert said. “There were a couple moments that day where I was not feeling it and not happy, and I had to force myself to take a nap that day. It was a draining week because it was long and intense.”

If he could redo the week, Hulbert said he would have given himself more grace.

“You have to find that balance between meeting guys and putting yourself out there,” Hulbert said. “But also respecting your own mental health and physical health.”

Hulbert said answering questions with the two fraternities who invited him to interview night helped him decide which to join. One fraternity, he said, asked questions that made him feel stressed and uncomfortable.

“It was very intense,” Hulbert said. “They definitely broke you down and tore me to shreds, and I think, obviously, you could tell they weren’t as concerned with the answers to the questions. It’s just how you reacted to high-pressure, high-intensity situations.”

Hulbert ended recruitment joining Alpha Tau Omega, his top choice and the one that had members he felt he fit in with perfectly, he said. Hulbert enjoys outdoor activities and is strong in his faith, he said, and people he met in ATO related to that.

With a low number of fraternity PNMs this past year — only 78 compared to the normal 200 — Green said Pepperdine fraternities expected an influx of students to register this fall.

“We had 185 men register for IFC recruitment,” Green said. “It’s still within our healthy range — I wasn’t disappointed by the numbers by any means — but I really thought it’d be higher.”

With so many students new to Pepperdine, Green said she thought some men did not know about recruitment this year or preferred to adapt to on-campus life before joining FSL.

Gamboa thought about going through recruitment during his first year at Pepperdine but decided to wait to be on campus. Going into recruitment, Gamboa made it his intention to enjoy the process, he said.

“I went in with an open mind just to use it as a way to meet new people,” Gamboa said. “I didn’t really have many expectations — I just saw which one fit me.”

Once he met the chapters on the first day, however, Gamboa said he connected well with Psi Upsilon and decided it was the only fraternity he was interested in joining.

“It puts even more pressure on [students],” Gamboa said. “But I guess you don’t want to ‘join a frat to join a frat’ either. You want to join the one that’s right for you.”

The process is stressful, Gamboa said, but he also liked pushing himself out of his comfort zone socially.

“All the actives have to agree on you to get a bid,” Gamboa said. “It’s a bit intimidating, but that also forces you to have conversations with everybody.”

Gamboa closed out recruitment week pledging to Psi U, and he said he is excited to carry lifelong bonds with his fraternity brothers throughout his time at Pepperdine and after.

William Bacon contributed to this reporting.