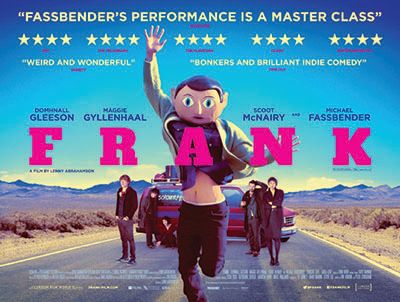 “Frank” is an independent feature which captures the essence, and at times illustrates, the charm of the independent film. It explores the popular motif of social media through a unique lens. The film follows Jon Burroughs, a far below average musician, who aspires to be more.

At the film’s beginning, Burroughs leads a mundane life. He works in a dull office where he enters data in a small cubicle. Each day Jon walks to his parent’s house, singing hollow songs about his surroundings — a woman walking down the street, a dog peeing or a gray sky. Jon then takes to Twitter in order to champion his glimpses into creativity and originality.

Jon’s woeful life displays a man desperately grasping for inspiration. His life finally begins to take a turn when, under the wildest of circumstances, Jon finds himself the new keyboardist for an eccentric band lead by a masked man named Frank. Frank expresses himself through music, creating his own comfort in the strange melodies he composes. Frank’s mask is large, pale and worn. But his painted eyes are big and genuine. The size of Frank’s mask establishes an uncomfortable strangeness, while Frank’s painted eyes hold a fierce earnestness. The film has a wonderful sense of awareness and intention, as it utilizes Frank’s mask to represent the art of creation as a physical entity — an entity which needs to be nourished and cared for.

As the film progresses it presents a stark and enlightening juxtaposition. The first is from Jon’s perspective. He voyeuristically marvels at Frank’s creativity. However, Jon’s admiration does not compel him to contribute to the creation of the band’s music. Instead Jon creates a persona for Frank and his band, and begins to publicize Frank’s journey to creating his new album on Twitter and YouTube.

At first, Frank is enveloped in his music, but as the band’s popularity grows, Frank becomes concerned with how the outside world will accept him. The film examines the question, “Is there meaning without recognition?”

Frank addresses the question of media and recognition, and it holds a significant relevance. Social media is an industry which has comfortably integrated itself into our everyday world.

“Frank” embraces social media as an industry by telling a relatable story of two men battling to have a greater understanding of innate meaning in a world of civic communication.

In sharp contrast with the superhero blockbusters of the summer, “Frank” provides audiences a chance to have a pertinent conversation about popular culture and social media. “Frank” has an eccentric and socially potent story, and an unassuming wit that engages viewers to laugh and contemplate the internal impact of social media. This is an indie film worth seeing.