FLU: Any fries with that flu shot? 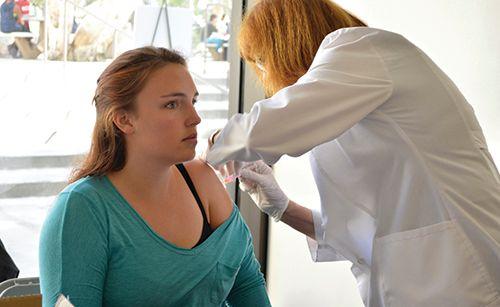 It’s flu season again, and a lot of students feel sick — either from the flu or from watching people get shots while they’re eating in the Caf. The flu virus is expected to commandeer college campuses over the next few weeks, and the Student Health Center isn’t pulling any punches (or needles) when it comes to immunization, according to the Department of Health and Human Services.

“We’re seeing a lot of the flu this season,” Student Health Center nurse Arleen Fernandez said as she gave out vaccines in the cafeteria. “Just all of the sudden: boom!”

By the afternoon of Jan. 23, Fernandez said there had been about 40 students who had been vaccinated in the Caf.  According to Student Health Center nurse Barbara Stern, the procedure only takes about 30 seconds. “Flu shots are easy,” Fernandez said. “We don’t have to worry about difficult procedures, and we have sterile needles.”

The Student Health Center has administered approximately 500 vaccines through on-campus clinics and students who have scheduled appointments, according to Physician Assistant Jennifer Ehteshami. But despite the constant warnings that the flu is spreading, some students said they strongly believe that the flu shot is the cause of illness itself.

“For me, my doctor would tell me I had to get [the shot] seasonally,” freshman Emily Shin said. “This season, I didn’t take it, and I haven’t been sick once. So now I’m kind of like, ‘I don’t want to take it anymore.’ Every time I take it, I get sick.”

The Department of Health issued a long list of side effects that may come with a flu shot. These include, but are not limited to: soreness and swelling at the injection site, fainting, headaches, fever, nausea, difficulty breathing, hives, paleness, weakness and dizziness. Ehteshami said the flu shot will not make a person sick with the flu.

“A person can experience adverse reactions or side effects, but these symptoms are significantly less severe than the flu and don’t last as long,” Ehteshami said. “The flu shot is like any other vaccine, and it will provide your body with some immunity to certain strains of Influenza.”

For some, it’s not the flu shots themselves that are causing nausea, but the fact that they’re taking place next to trays of cafeteria food.

“I don’t believe it’s a conspiracy, but I feel really weird about getting a flu shot in the Caf,” junior Anna Tramutolo said. When asked if she would get a vaccination elsewhere, she said with a laugh, “But then I’d have to walk somewhere.”

According to Fernandez, the location of the vaccine command post is entirely deliberate.

“This is the best visibility we have,” Fernandez said. “Kids are always coming and going from classes.”

However, students like Tramutolo and senior Egan Escudero would argue that flu shots in the Caf make both the food and the vaccines unappealing.

“I remember one time that the flu shot made some chick seize up and she was paralyzed, and that freaked me out as a kid,” Escudero said. “It’s unsanitary that it’s in the Caf. You don’t medicate where you eat … I wouldn’t take the shot at school. I just like nature to take care of me.”

Nature is not on everyone’s side, however, as Ehteshami reported that several students have been diagnosed with “Influenza-like illness” along with a few students testing positive for the flu. While last season 16.6 percent of people diagnosed with the flu ranged from ages 18 to 49, this year the number is expected to increase to 31.4 percent, according to FluView, which provides laboratory-confirmed data on Influenza. Centers for Disease and Control Prevention suggests this is due to a lack of antibodies existing in younger generations that are found in seniors.

In addition to getting the flu vaccine, Ehteshami said she recommends boosting the immune system to prevent illness by eating nutritious foods, getting adequate sleep, drinking plenty of water, exercising, managing stress levels, washing hands frequently and avoiding those who are sick.

Flu shots will be available again next Wednesday from 11 a.m. to 1 p.m. for those who are interested. For those who aren’t: you know when to avoid the Caf. 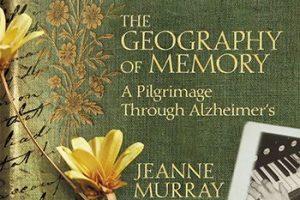 Poet, playwright and teacher Jeanne Murray Walker will read from her new memoir “The Geography of Memory: A Pilgrimage...
Copyright 2013 Jupiter Premium Magazine Theme
Back to top