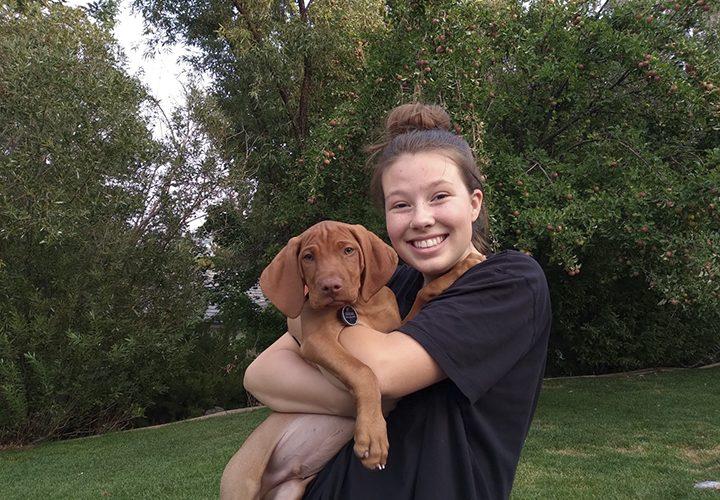 First-year Lauren Kinder gleefully cradles her new dog Goose at her home in Reno, Nev., on Aug. 29. Kinder’s puppy has kept her company as she takes online courses and builds virtual relationships with fellow Waves. Photo courtesy of Lauren Kinder

While most first-year students gave up a traditional experience of their first semester of college, others decided to move to the Malibu area, despite the campus closure, to connect to the Pepperdine community.

First-year students face the obstacle of searching for community outside a campus they have yet to set foot on. To replicate the college experience, students look for community within housing proximity, student groups and clubs.

“I kind of wanted to get as much of the Pepperdine experience as possible,” first-year Phillip Young said. “I knew there were other freshmen who were going to be living out here, and I thought that, if possible, I wanted to be able to connect with some of them and kind of form those relationships.”

In a traditional academic year, Pepperdine requires first-year students to live on campus to foster community and growth, according to Pepperdine’s mission statement.

“The relationships and community built during these first years of attending Pepperdine are vital to the college experience,” according to the HRL Mission Statement. “Housing and Residence Life provides an atmosphere that empowers students to make connections between faith, living, and learning within a diverse community. National and Pepperdine studies have shown that students who live on campus have higher grades, higher graduation rates, and higher satisfaction levels with their campus experience.”

Some first-year students, like Young, said they agree with HRL that community comes from a campus-based living experience, which is why many have moved to Malibu.

Young moved from his home state of Tennessee to an apartment in Santa Monica, CA, with other Pepperdine students. Young said he feels connected to the Pepperdine community despite virtual classes because he is able to regularly meet up with other Waves.

“Obviously there’s a large portion of what makes Pepperdine great that we can’t experience right now, but I think just from the classes that I’ve had so far and the people I’ve been able to interact with, I feel confident in the decision I made to come to Pepperdine,” Young said.

Young said he remains optimistic that campus will open in the spring. While he has made the best of adjusting to virtual school, he said he recognizes there are parts of remote learning he cannot compensate for on his own, such as dorm communities and classroom interaction.

“I’m looking forward to being in person on campus and continue developing those relationships,” Young said.

First-year Ariel Wilson also moved from her home state to be closer to Pepperdine. Wilson moved from Texas to Ventura, CA, with other first-year students in an apartment to simulate a traditional college experience.

Wilson said it was important to her and her parents that she began college in an environment where she could stay academically motivated. After completing her senior year of high school in an online format, Wilson said she felt confident moving would benefit her. She said she has been able to adjust to the online classroom environment but still wishes it were more engaging.

Virtual Greek life helped Wilson feel more connected to the Pepperdine community, she said. It fostered connections with upper-level students and other first-year students living at home and created more of the sense that she had begun college, Wilson said.

“One of my biggest fears in being a spring admit was I was going to walk on campus in the spring and everyone was going to be super close and I wouldn’t know anyone,” Joiner said. “So when the opportunity to move in with Pepperdine students arose, I thought, ‘Well, here’s my chance to make some friends so that when I go on campus, I won’t be completely alone.’” 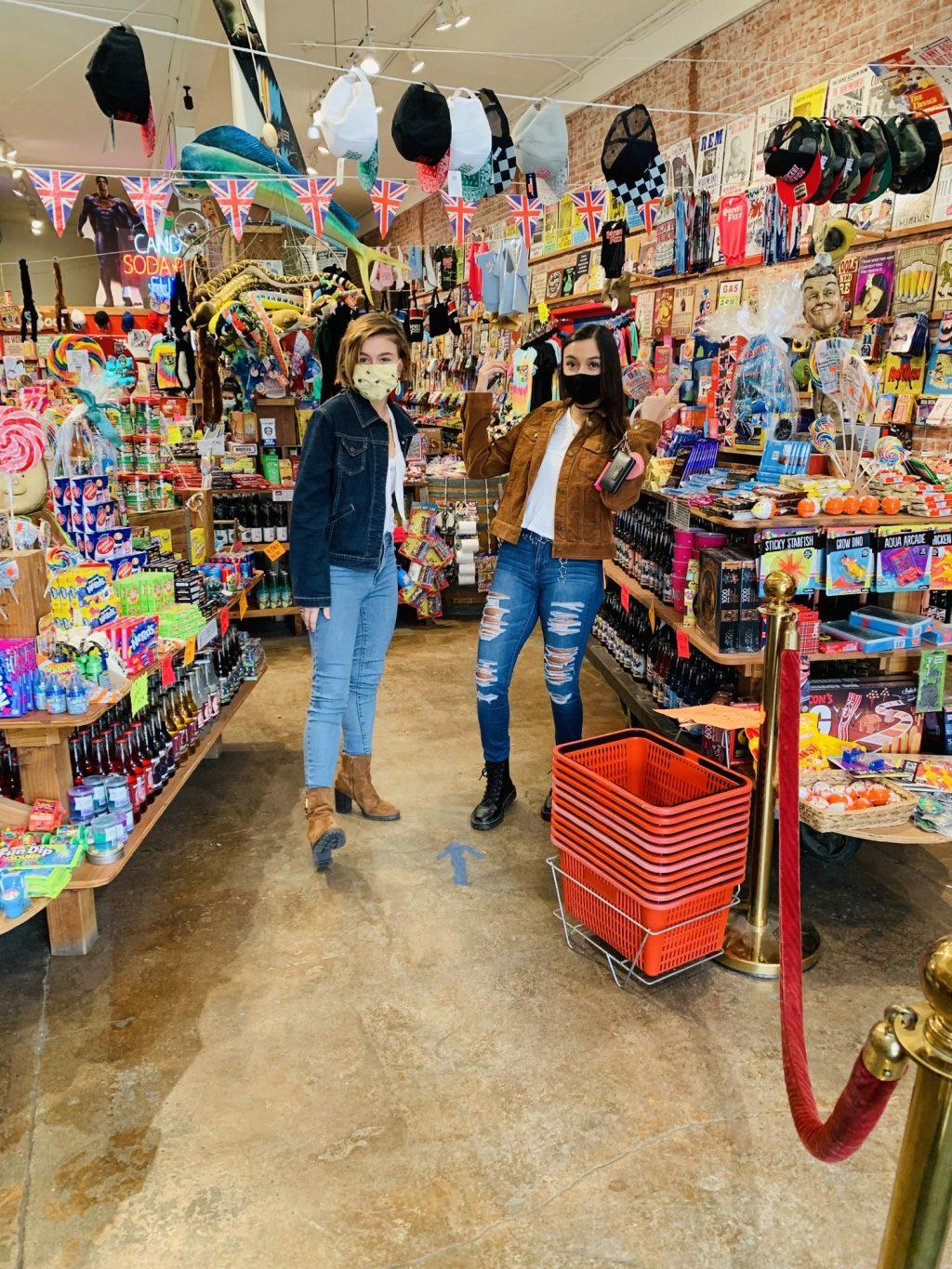 First-year Isabella Joiner (left) and her roommate Stephanie get hyped after finding a Rocket Fizz in downtown Ventura on Sept. 11. Joiner enrolled in online community college classes for the fall but moved to Southern California for the Pepperdine friendships. Photo courtesy of Isabella Joiner

Both Wilson and Joiner said they have already met a great group of friends in the area, and in doing so, they have felt connected to Pepperdine. If the University opens in the spring, however, they said they would want to move on campus if possible.

While first-years like Young and Wilson moved to the Malibu area this fall, others like Annie Leow remain at home for their first semester of college.

Leow lives in her hometown of Memphis, Tenn., while doing virtual classes. She said she purposefully enrolled in a heavy class load because her high school friends were able to go to their respective colleges on campus. In doing so, she could take up more of her free time with schoolwork. Classes did, however, require Leow to adjust from high school coursework to college expectations, she said.

“I feel like there’s a bit of a learning curve just adjusting to the schedule, and it was a little more difficult to do it by yourself without other classmates,” Leow said.

Adjusting to college coursework was hard, but Leow said finding a sense of community was difficult as well. This motivated her to participate in virtual Recruitment. Now that Leow is a member of sorority Pi Beta Phi, she said she feels much more connected to the Pepperdine community.

First-year Lauren Kinder found community in different ways. Kinder lives at home in Reno, Nev., and said she found her sense of Pepperdine community through the Regent Scholar group as well as private chats with classmates in Zoom classes.

Kinder said she enjoys taking online courses at home. She said she likes that she can rely on her parents for a meal, work right up to the beginning of class and still see friends from home.

While Kinder remains positive about the online college experience, she said she still wants to get involved, possibly join a sorority and get to know her peers outside of classes.

Each first-year student creates their own college experience amid a virtual format. Pepperdine intends to announce plans for the spring 2021 semester in November, according to the Sept. 23 President’s Briefing. 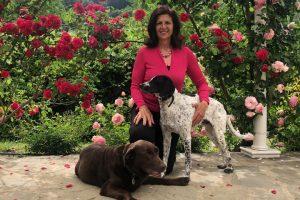 Florence program director Elizabeth Whatley kneels in front of her rose garden for a photo with her two dogs, Izzy the chocolate...
Copyright 2013 Jupiter Premium Magazine Theme
Back to top